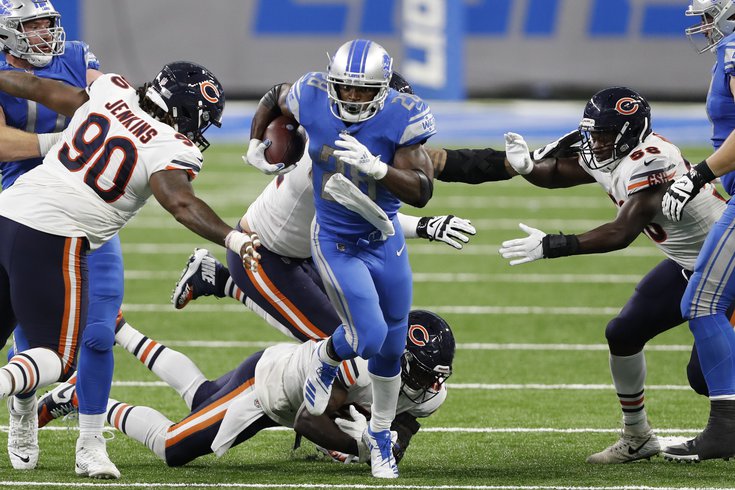 Do you really trust 35-year-old Adrian Peterson to be productive again?

Fantasy football is all about decisions. And research helps.

We are not going to waste your time giving you sit/start advice on players you have no choice but to play. We know Saquon Barkley draftees are not pleased with his six rushing yards in Week 1, but a top four pick isn't going to be jettisoned after just one bad game.

[Editor's note: Evan has Saquon on one of his fantasy teams.]

Which is why we are going to give you one player to start and one to sit at each fantasy football position from a pool of players for whom a start is a borderline decision. Not stars, but Rookies, aging veterans, and players who are staples on fantasy benches — those are who make you think hardest each week.

Here's a brief peak at a player at QB, RB, WR and TE who should stay on your bench and get the starting nod in Week 2:

In Week 1, Big Ben showed he was healthy and capable of posting the big numbers of his younger years. He scrambled for a big first down, threw three touchdown passes and showed he was in sync with his top wide receivers in JuJu Smith-Schuster, Diontae Johnson and James Washington. If James Conner proves healthy enough to start, he'll be an even bigger boost as a blocker and receiver. Roethlisberger could have another good game against the Broncos in Week 2.

Rivers' Indianapolis debut wasn't the most confidence-inspiring performance last Sunday, and two bad interceptions undid 363 yards of passing yardage in their season opening loss. Rivers could earn his way back into fantasy owners' good graces, but he'll first need to show he still has it against the Vikings in his second start.

The Ravens' rookie running back might be a start-worthy option the rest of the way after having two touchdown runs in his NFL debut. He got the second most carries of any Ravens running back in their run-happy offense. The only reason for pause is his lack of pass-game inclusion, though it is worth noting Baltimore running backs combined for one single reception (by fullback Patrick Ricard, for 9 yards). That should change as the season progresses.

Is it ridiculous to say sell high on AP after one week? He had 93 yards to lead Detroit rushers in his first career game with the Lions last week, but he has two young and talented running backs nipping at his heals and getting more comfortable in the Matt Patricia scheme in Kerryon Johnson and rookie D'Andre Swift. Expect those two backs to eventually overcome him in touches. Don't be a fool and expect 35-year-old Peterson to be a workhorse every single week.

Who had the second most targets in Dallas' opener last week? Who had the biggest gain of the game? Well that would be the rookie Lamb, who was on the field for 83% of the team's offensive snaps against the Rams. Lamb's role in the offense and chemistry with quarterback Dak Prescott will only get better. Lamb is the real deal and should be in your starting lineup.

Just because Michael Thomas is likely out for Week 2 doesn't mean you should automatically start the next wide receiver up on their depth chart (behind Emmanuel Sanders — who you should definitely start). We aren't saying you were wrong for picking him up on waivers, but we are saying we have no idea whether he'll be utilized or targeted heavily in Thomas' absence, and waiting a week to see is a smart plan.

For whatever reason, having Zack Ertz ahead of Goedert on the depth chart seems to have diminished Goedert's value among fantasy owners. This is an incorrect assessment. We mentioned Goedert — who led the Eagles with over 100 yards and a touchdown in Week 2 — as a must pick-up on waivers. Assume he's now been claimed everywhere, we'll repeat that we said earlier this week:

Gronk has name ID, to be sure, but he had just three targets from his buddy Tom Brady in Week 1 and was out-targeted by fellow tight end O.J. Howard 2-1. Gronk might be a red zone threat but he doesn't seem to be a high value target. Howard is by far the more valuable tight end in Tampa.