Film breakdown: Joel Embiid and the art of zoning up a pick-and-roll

On December 15th, Joel Embiid was talking at the Sixers practice facility in Camden. The night before, his team was blitzed defensively in a loss to the Toronto Raptors. The Raps shot 47 percent from the field, scored 123 points, and recorded a 130.4 offensive rating.

Following the game, Embiid was frustrated with the team’s pick-and-roll defense. His day-after assessment was blunt.

“As a team, I thought defensively we didn’t guard at all,” he said. “Toronto, I think that’s the best offense in the league.

Statistically, the Raptors still had the best offense in the NBA coming into Wednesday night’s rematch in Philly. That wasn’t the case afterward, though. This time around, Embiid and the Sixers shut them down. Toronto shot 39 percent from the field, scored 89 points, and finished with a 92.8 offensive rating.

The biggest factor? None other than Joel Hans Embiid (two blocks, one steal, 82.4 defensive rating), who again defied the notion that transitioning to NBA basketball involves a steep learning curve.

The Sixers replaced Embiid-Jahlil Okafor lineups with an Embiid-Nerlens Noel rotation, which certainly seemed to help. Much of Toronto’s offense is action that flows into a high ball screen for one of their two all-star guards, Kyle Lowry or DeMar DeRozan. Those two have been very successful creating in these situations, but Embiid found a way to really frustrate them.

So, how did Embiid defend the high pick-and-roll? By “zoning up,” explained by SB Nation’s Doug Eberhardt here:

The preferred pick and roll strategy of many NBA teams, especially those with large, immobile big men or an active analytics department (Ed. note: Everything except ‘immobile’ applies here) On middle or high pick and rolls especially, the screener's man (again, almost always a big man) doesn't come out and play the pick and roll. Instead, he essentially plays a one man zone at the elbow area of the key or even a little deeper, patrolling the high paint. The big should be able to contain further penetration by the ball handler while giving up the mid-range pull-up jump shot, seen as the least efficient attempt in the game. 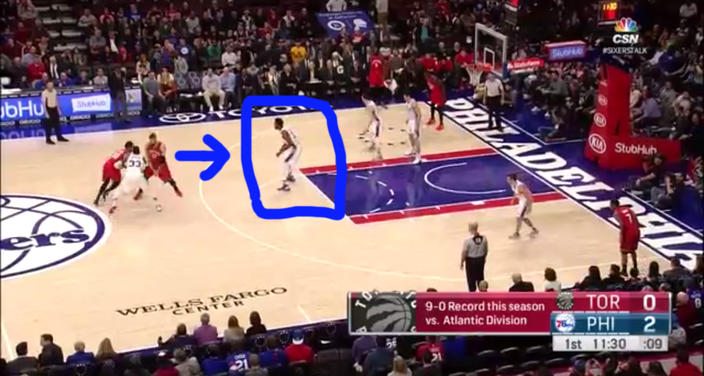 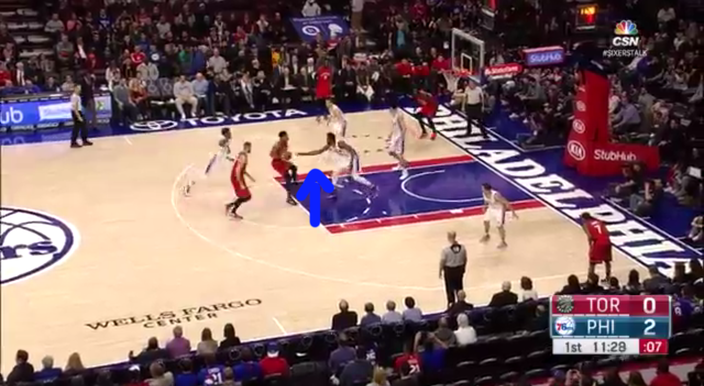 On this particular play, Embiid forces DeRozan to throw a grenade to a covered DeMarre Carroll in the corner, a shot that is blocked by Nik Stauskas.

This was the preferred pick-and-roll strategy of the Indiana Pacers when they were shutting teams down defensively with Roy Hibbert. Like Embiid, Hibbert used his verticality to offer elite rim protection. What should excite Sixers fans is that in addition to being huge, Embiid moves a hell of a lot better than Hibbert.

Embiid shows off his athleticism on this play. Lowry also happens to be a 44 percent three-point shooter, so you can’t just hang back and let him dribble into a triple. Look how much closer to the screen that he shades against Lowry. 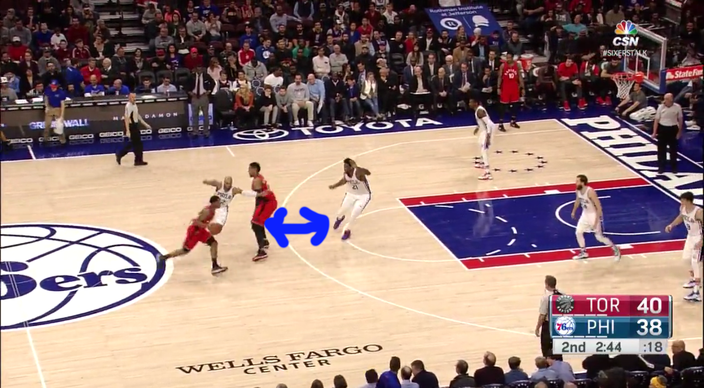 And when the Cardinal Dougherty/Villanova product forces the switch, he can’t get shake Embiid. Again, this is a borderline top-10 NBA player that he’s defending:

(After this miss, Embiid leaked out in transition, posted up the smaller Lowry, earned two free throws, and solicited “Trust the process” chants from the crowd. Awesome sequence.)

This wasn’t the only time that Embiid held up on a switch against an all-star guard:

Or the only time that he sealed off the paint and forced a miss while zoning up:

Ironically, the best way to beat this type of defense is with a center like Embiid who can make threes. “The Process” is already an elite rim protector 30 games into his NBA career and a major part of the reason why is he makes it hard to get into the paint in the first place.

(Oh yeah, being gigantic helps. That, too.)