Five free agents who make sense for the Eagles, version 1.0 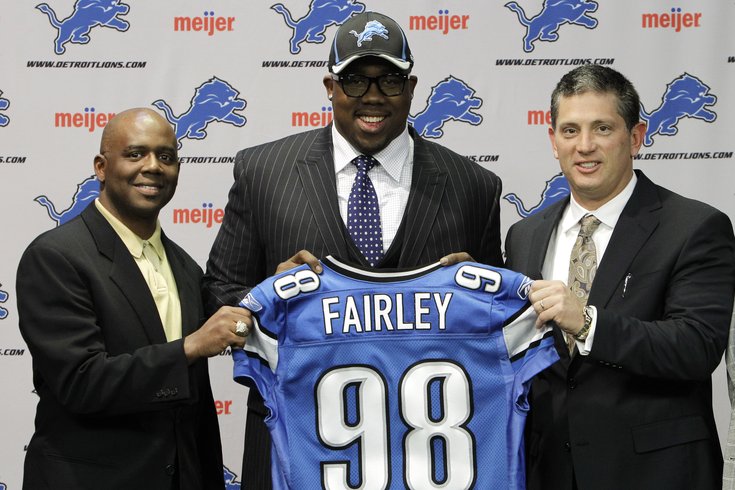 Nick Fairley had his best seasons under Jim Schwartz.

With the dust having cleared on the Eagles' coaching staff hires to some degree, it's time to start shopping for their groceries. After my first look at this offseason's crop of unrestricted free agents (we'll do this again), here are five free agents who make sense for the Eagles.

Earlier this week, we published a 2,200+ word article on why the Eagles should attempt to tag-and-trade Sam Bradford, with the premise being the following paragraph, that we re-stated over and over again:

The Eagles aren't going to be Super Bowl contenders in 2016. And really, they're not even close. A self-realization of that reality should be the starting point to this upcoming offseason.

No matter what happens this offseason with Bradford, the Eagles must draft a quarterback. While there are no clear-cut "No. 1 or No. 2 overall" type quarterback prospects like there were a year ago with Jameis Winston and Marcus Mariota, this could be a very deep quarterback draft, with appealing options in rounds one, two, three, and beyond. The top three options extremely early in the draft process appear to be North Dakota State's Carson Wentz, Memphis' Paxton Lynch, and California's Jared Goff. The Eagles simply cannot miss out on a rookie quarterback to groom.

Daniel is 29 years old, and 2016 will be his eighth year in the NFL. He is well-regarded but has never gotten the chance to play, as he has been buried behind healthy quarterbacks like Drew Brees and Alex Smith. Daniel would be all too familiar with what new Eagles head coach Doug Pederson would expect of him. He could be a stable option at quarterback, with a twinge of "devil you don't know" upside, if that makes any sense.

(The Eagles would save $3.5 million by cutting Mark Sanchez, by the way.)

The Eagles could view a Daniel-rookie combo as their new 1-2 at quarterback, kind of similar to a "Doug Pederson - Donovan McNabb setup" under, you know, Pederson.

Staying on the Chiefs theme, Pederson's old LG was a second-round pick who is really beginning to come into his own as an NFL starter for the Chiefs. Allen just turned 26 this January, and would be an immediate (and significant) upgrade over Allen Barbre for the next five years.

Like Daniel above, he'll be completely familiar with what Pederson will expect of him, and would knock out one spot on a neglected offensive line that needs several competent bodies, and fast. Allen feels like a no-brainer target.

Fairley was drafted by Jim Schwartz and the Lions at 13th overall, and was beginning to play well before the Lions canned Schwartz. Fairley's season-by-season numbers:

The numbers in blue above note when Fairley played under Schwartz. In 2015 free agency, Fairley signed a one-year deal with the Rams worth $5 million. If his price tag comes down a shade, Fairley could be an attractive rotational DT for depth.

Jones is yet another player who had his best success in the league under Schwartz. The Titans drafted Jones in 2008 in the second round, and while defensive coordinators aren't exactly the guys pulling the trigger in the war room, you can bet Schwartz liked him. In his rookie season, Jones had 5 sacks and 3 forced fumbles, and then Schwartz was off to be the head coach of the Lions.

In 2013, Jones signed with Schwartz's Lions in free agency. He was lost for the season Week 3 with a ruptured patellar tendon.

Could Schwartz and Jones try to unite for a third time? On the one hand, the Eagles are likely to be loading up on defensive line talent, like they used to in the Reid 4-3 days. You know... fastballs and whatnot. On the other hand, Jones will be turning 30 in May. In my view, the Eagles should be looking to go young and building for the long term, but it's hard to ignore Schwartz's and Jones' history, and Jones may come at a reasonable price.

The prospect of the Eagles going after a safety in free agency comes with an asterisk -- What are they going to do with their own free agent safety, Walter Thurmond? Under Chip Kelly and Billy Davis, the Eagles preferred safeties who could cover slot receivers. That's Thurmond. Others like their safeties to have a little thump in their game. That's not Thurmond.

Some will view Thurmond as a slot corner, not a safety. I myself am curious how Jim Schwartz will view him. I really don't know.

I will, however, note that there are a number of good safeties who are set to become free agents this offseason, such as Eric Berry, Eric Weddle, Reggie Nelson, Tashaun Gipson, Rashad Johnson, Rodney McLeod, and George Iloka, to name a few.

Two of those guys are Bengals -- Nelson and Iloka. Nelson was tied for the league lead in interceptions with eight, while Iloka was a solid, well-rounded safety who did not make many splash plays, but did not give up many either. It's going to be very difficult for the Bengals to keep both of them.

Iloka will turn 26 in March. Like Jeff Allen above, Iloka is an ascending player coming off his rookie contract who the Eagles could immediately insert into their starting lineup and be set there for five years. With a healthy crop of safeties available, thus theoretically hurting their potential earnings, this could be a good year to sign a young one.