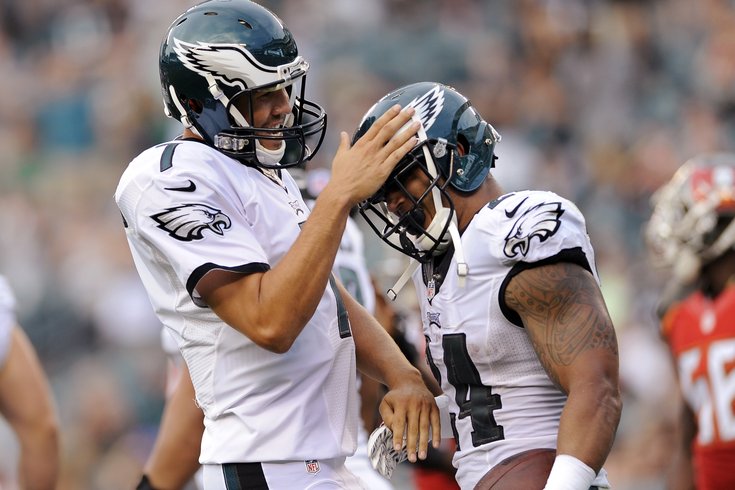 Philadelphia Eagles quarterback Sam Bradford, left, congratulates running back Ryan Mathews after scoring a touchdown during the first quarter of their preseason opener against the Bucs.

After wrapping up training camp earlier this week, Doug Pederson and the Philadelphia Eagles hit the road to take on the Pittsburgh Steelers in their second preseason game on Thursday night.

There's good news and bad news for fans planning on tuning in to see their Birds take on the cross-state rival.

First, the good news: Sam Bradford and the first-team offense will be on the field for more than three plays this week. Pederson said on Tuesday that the starters will play the entire first quarter and possibly into the second.

The bad news: second-overall pick Carson Wentz remains sidelined with fractured ribs suffered in the opener against the Bucs. Add to that the fact that the newest Eagle -- WR Dorial Green-Beckham -- won't be playing either, and suddenly a lot of the intrigue is stripped from the game.

During the Bucs game -- and this has been confirmed by the station -- ratings on CSN spiked in the second half when Wentz was under center. Typically, preseason ratings take a big hit once the starters exit the game and continue to trend downward throughout. That, however, clearly wasn't the case for the rookie's debut, with ratings peaking at an 11.9 at 9 p.m., just as the second half was getting underway.

That being said, there will still be plenty to keep an eye on once kickoff rolls around at 7 p.m. Let's take a look at a few of them in the form of five over-unders...

This is a tough one to nail down, especially since Bradford played just three offensive snaps last week. He'll get plenty more than that against the Steelers, but one or two sustained drives by the home team and Bradford could find his work limited yet again. I have a feeling Pederson would like to see his starting QB attempt at least 10 passes tonight, assuming the offensive line can keep him out of danger. If he gets more than those 10 attempts, I don't think it's out of the question that he could cross the century mark.

However, Wentz lead all Eagles QBs with 89 yards on 24 attempts (12 completions). And the Eagles also lack a real deep threat, unless you count Nelson Agholor, who failed to record a catch against the Bucs. That inability to stretch the field is going to be a problem this season if the second-year wideout doesn't turn things around. And if we're stuck watching a lot of Sam Bradford check-downs, it's going to be tough for him to throw for 90 or more yards.

As we just mentioned, Agholor failed to catch either of the two passes thrown in his direction in the opener. Considering that most of his playing time came with a totally ineffective Chase Daniel under center, his poor performance may have been tied to the team's overall inability to throw the ball -- on 36 pass attempts, they threw for just 114 yards.

With Jordan Matthews still sidelined and Green-Beckham not yet suiting up for the Eagles, Agholor shouldn't have a repeat performance of last week, especially with DGB gunning for his spot.

The offensive line, which lost one of its depth guys in Dennis Kelly earlier this week, didn't have their best game last week, especially when Daniel was in the game. He was sacked four times, and hurried several more. And even though Wentz was able to avoid being sacked, his interception came after a breakdown in protection allowed a Bucs defender to get in his face and force a high throw -- not to mention the hit late in the game that led to his current injury.

There's a new starter at right tackle (Allen Barbre) and both veterans Jason Peters and Brandon Brooks will also start, but how long they remain in the game may have a lot to do with whether or not they are able to keep the Steelers under 4.5 sacks. I'm going to take the glass-half-empty approach here.

The Eagles had five takeaways last week. Go ahead and look it up if you don't believe me. They were like ugly bookends to an ugly game -- the first came on the opening kickoff and the last was a game-clinching interception in the end zone that allowed the Birds to kneel out the rest of the clock. There's going to be more Fletcher Cox this week. More Bennie Logan. More turnovers?

Given that Ben Roethlisberger isn't playing for the second straight week, that could be good news for Jim Schwartz's defense. Although it's worth pointing out that the Steelers turned the ball over just once (a fumble) in their opener against the Lions, I'm going to put some faith in one of the strengths of this team, its defense, specifically the front seven.

Close-up shots of Wentz on sideline: 4.5

Remember what I said about the ratings spiking when Wentz was in the game? CSN knows it, so you better believe they're going to be talking about him plenty throughout the broadcast. It's the preseason, after all; they're going to need something to talk about, especially once the Eagles starters come out of the game.