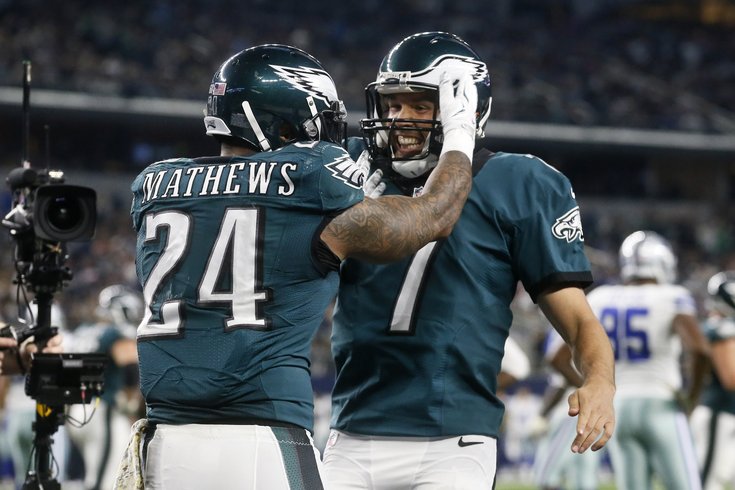 It wasn't convincing. It wasn't pretty. And it wasn't good for your heart.

But it was a win, one that Chip Kelly and the Philadelphia Eagles needed desperately. Oh, and it came at the expense of the Dallas Cowboys.

The Birds' 33-27 overtime win improved the team to 4-4 on the season, a half-game behind the New York Giants for the lead in the NFC. It also essentially ended the Cowboys' season -- they're now 2-6 after dropping their sixth-straight since Tony Romo went down in Week 2 at the Linc.

For the Eagles, it was a must-win game coming out of the bye. And thanks to some questionable calls on Dallas' final drive, it was almost a devastating loss. Instead, it was a walk-off win under the lights in Jerry's World, one that offered redemption to a pair of Eagles -- DeMarco Murray and Jordan Matthews, both of whom were huge on the Eagles game-winning drive in OT. Murray accounted for 46 yards (32 rush, 14 receiving) on the drive and Matthews hauled in three passes, including the 41-yard game-winning score.

Here are five reasons why the Eagles were able to hang on to beat the Cowboys on Sunday night:

On first watch, Sam Bradford had his best game of the season. The numbers may not reflect that, considering he finished 25-of-36 for 295 yards and a touchdown, but he certainly looked better than he did in the team's first seven games. Sure, he's shown flashes this season, but from start to finish, this was a solid game for Bradford, who also celebrated his 28th birthday on Sunday.

Bradford had a few nice touch passes down the sidelines, one to TE Zach Ertz and one to Murray, and delivered a great ball to Matthews for the game winner.

He also did a very nice job staying in the pocket and stepping up to throw under pressure. Previously, it seemed like there was some hesitation from Bradford when the pocket started collapsing. Against the Cowboys, Bradford escaped trouble a few times and was able to hit his check-down receiver. Throughout the game, that was one continually frustrating thing from the offense -- the Eagles kept throwing the ball short of the sticks on third down. Bradford seemed afraid to go down the field. In the second half, the offense seemed to open up behind a more confident Bradford, and although he didn't have a ton of time to throw, he looked decisive and got rid of the ball when needed.

Furthermore, Bradford didn't turn the ball over and passed for more yards against the Dallas defense than anyone this season not named Drew Brees.

The Eagles defense didn't reach its goal of three turnovers against the Cowboys, and for just the second time this season, it failed to record multiple takeaways. But the one it got was huge -- and came at a crucial point in the game.

With just under 13 minutes left to go in the game and the Cowboys driving, rookie linebacker Jordan Hicks intercepted Matt Cassel and returned it 67 yards for the touchdown to give the Eagles a 21-14 lead.

Matt Cassel thought he had Darren McFadden open by the sideline. Jordan Hicks had other ideas. PICK SIX! #PHIvsDAL https://t.co/OaHWp7DfjK

In just his first season, Hicks is already making a name for himself as a Cowboy killer. You may remember that he delivered the hit on Romo that lead to his collarbone injury. Unfortunately, Hicks injured his pec later in the game making a tackle on running back Darren McFadden. He said in the locker room after the game that he feels okay, but would be going for an MRI on Monday anyway.

Second-year wideout Matthews has gotten his fair share of criticism this season for dropped passes. And I have been among those voicing my concerns. As Sunday night bled over into Monday morning, however, Matthews reminded fans why their expectations for the Vanderbilt product were so high heading into the season.

But it wasn't just about the final play for Matthews -- although that's the one we'll all remember. Matthews finished with nine catches for 133 yards and a score. It was good to see him post his first 100-yard game since the season opener, especially with all that's surrounded him after a rough couple of weeks that culminated with a drop-fest in Carolina two weeks ago. Not that you haven't read it a million places before, but ... Matthews is out working on his hands after EVERY SINGLE PRACTICE -- that's part of the reason his drops were so surprising -- so a big game against the Cowboys seems like a fair reward for all the work he puts in.

Matthews: "When games like this happen, it's not like it's the greatest thing in the world. I did my job. I did what I'm supposed to do."

The Eagles were lucky to avoid Dez Bryant in Week 2, but he was back at full health this time around. Although he was held in check most of the game -- after two catches for 57 yards on the Cowboys' opening drive, he didn't make another until five minutes into the fourth quarter -- it came at a price.

All the attention must have been focused on Bryant and tight end Jason Witten because the secondary allowed little Cole Beasley to go off. Beasley finished with nine catches (on 11 targets) for 112 yards and a TD and always seemed to be making a grab when the Eagles needed a stop the most. Bryant, on the other hand, finished with five catches for 105 yards and a 38-yard touchdown, which came on a jump-ball Hail Mary on a broken play.

It wasn't like they completely shut Dez down, but they did enough to keep him from costing them the game.

The Eagles ran the ball for 172 yards Sunday night. That's the most the Cowboys have surrendered in a game all season. And for those keeping score at home, it's 165 more than in their meeting earlier this season. Murray and Darren Sproles also combined for eight catches for 81 yards (although six of those catches and 78 of those yards belonged to Murray).

The ability to establish a running game also seemed to go a long way in helping Bradford gain confidence as the game progressed. That, or it tired the Dallas defense out, which made Bradford look more confident. Either way, that's how it's supposed to work.

Additionally, the running back rotation looked -- and worked -- more like we expected when the season opened. Murray would grind away at the center of the Cowboys defense for a few play. And then Ryan Mathews or Sproles would give him a rest and spread the defense out once they started to wear down. Just take a look at the summary from the Eagles first scoring drive:

By the time the game ended, Murray had compiled 161 total yards (83 rushing, 78 receiving) and a touchdown. But more importantly, he got revenge against his former team.

And his new team, the Eagles, is suddenly very much alive.