Five reasons the Eagles lost to the Cardinals 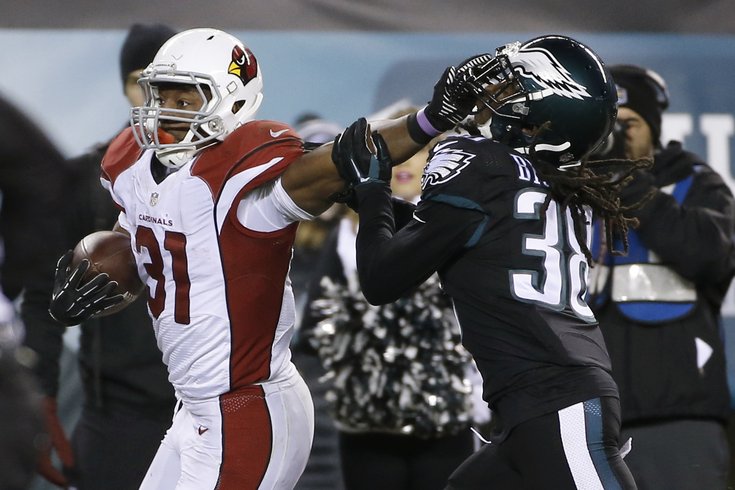 The Philadelphia Eagles were routed by the Arizona Cardinals, 40-17, on Sunday night, making it hard to forget that this was a 17-10 game at halftime -- and arguably should've been closer than that.

There are likely more than five reasons why the Eagles lost this game, but here are the five that immediately popped out at me while watching the game live. What you'll see below are a lot of the same issues that have plagued this team all season long. What you won't see, however, is a lot of blame on starting quarterback Sam Bradford.

Despite his two interceptions -- the first of which didn't really appear to be his fault -- and a fumble, I thought Bradford played really well. Here's just one example from the game, in my opinion one of his best throws of the season.

You cannot throw it any better than that. Great catch by Celek too. #Eagles #EaglesTalk https://t.co/fnA1yPVb3o

In the end, however, it was the Eagles (6-8) falling to the 12-2 Cardinals at Lincoln Financial Field, and setting up a do-or-die game against Washington on Saturday night. Here are five reasons why their season will be on the line next weekend.

The Eagles tackling was atrocious in their loss to the Cardinals. And the main beneficiary of those missed tackles was Arizona's rookie running back David Johnson, who finished with three touchdowns and 187 yards on 29 carries. He joins Jim Brown and Joseph Addai as the only running backs to rush for three scores against the Eagles in the same game. Just take a look at his 47-yard score and try to count all the missed tackles.

And here's Byron Maxwell's attempt to tackle Darren Fells on a 36-yard reception that set up the Cardinals' first TD of the game.

These are just two examples of how poorly the Eagles tackled on Sunday night. Kiko Alonso basically surrendered the goal line to Johnson on his third and final TD of the game. There was another in the final minute of the third quarter on John Brown's 16-yard touchdown. And countless others.

With all the talk heading into the game focused on Carson Palmer, the Cardinals receivers, and how the secondary would stop them, it was the ground game that killed the Eagles. Arizona finished with 230 yards on 39 carries (5.9 yards/carry). In fact, they ran the ball for almost as many yards as they threw it (263), despite the Eagles playing without their two starting cornerbacks for most of the night.

A lot of this goes back to the above reason: poor tackling.

"I'll have to go back and look at the film, but I know we did not tackle well," Kelly said after the game. "[Johnson is] a big back, but we did not do a good job of tackling him tonight. In the games where we haven't been successful defensively, it's come down to that. We didn't tackle well against Tampa Bay. I thought the last two weeks we have tackled well on the defensive side of the ball. But today, just looking at it -- and you'll have to look at the film to dissect what the exact issues are -- I know that we flat out did not tackle well."

The Eagles rushing attack, on the other hand, was never really a factor against the Cardinals. The Birds finished with just 74 total yards on the ground, 20 of which came on one run by their leading rusher, Ryan Mathews. He finished with 11 of the Eagles' 20 carries for 58 yards, while Darren Sproles and DeMarco Murray combined for just 12 yards on eight carries.

Murray finished with the fewest carries among those three -- just two in the game -- and didn't see his first carry until midway through the third quarter. Furthermore, he was on the field for just eight total snaps heading into the fourth quarter.

Perhaps the most significant sign of how far Murray has fallen down the depth chart came on a fourth and one play late in the first half. With the Eagles well inside field goal, Kelly opted to go for it from the Arizona eight yard line and decided not to go with his $40-million back, instead giving the ball to Ryan Mathews, who ultimately came up short.

So much for him being a north-south back. And based on what Murray looked like when was actually handed the ball, going with Mathews was still probably the right call. By the time the fourth quarter had gotten underway, Murray didn't even seem like he wanted back in the game -- he was sitting on the bench with a knit cap on even though the Eagles offense was on the field.

After the game, Kelly said that Murray's limited number of carries were due to the fact that they didn't run the ball well as a team and ultimately relied on Sam Bradford's arm move them down the field. The Eagles only finished with 20 running plays -- compared to 41 pass attempts for Bradford -- so it's not like there were a ton of carries to go around.

Still, you'd want your prized free agent to be a little lot more involved than that.

The Eagles turned the ball over four times -- including a pick-six that put Arizona up 27 points early in the fourth quarter. The Cardinals didn't turn it over once. The only real chance the Eagles had in this game was if they were able to force their opponent into mistakes, but instead, they were the ones with the costly giveaways.

In all honesty, the Eagles were in this game up until they decided to turn it over four times -- all in the second half. And even though Sam Bradford was responsible for three of them (2 INTs, FUM), he played pretty well overall.

But no matter how well he played, you're not going to win many games when you turn it over four times.

"Against this team -- I think they've had one turnover in the last three games themselves -- they had one penalty in this game and no turnovers," Kelly said. "Against a good team like that -- especially a good offensive team like that -- you can't turn the ball over like we did and expect to come out on top."

The Cardinals are just better

The Eagles lost to a much better team. I mean, did you watch the game? Do you need an explanation for this one?

How about this: The Eagles' first offensive touchdown -- a 22-yard pass to Zach Ertz -- may not have been possible if the Cardinals were with 11 guys instead of just 10.

10 defenders is not enough defenders. pic.twitter.com/halSY3zcFd

Their only other offensive TD came in the fourth quarter when the game was already out of hand.