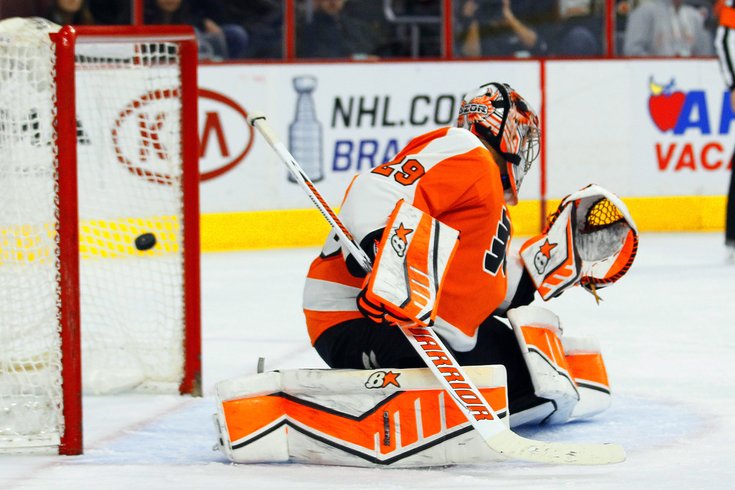 PHILADELPHIA — Brent Bellemore and Ryan Murphy each scored a goal to lead the Carolina Hurricanes to a 3-1 victory over the Philadelphia Flyers on Thursday night.

Jordan Staal added an empty-netter for the Hurricanes, who snapped a five-game road losing streak while taking their fourth victory in five games against Philadelphia this season.

Sean Couturier scored for the Flyers, while Jakub Voracek went without a point for Philadelphia. Voracek entered Thursday fourth in the league with 81 points, two behind the NHL-leading trio of John Tavares, Jamie Benn and Sidney Crosby.

The game pitted a pair of teams not headed for the postseason, and it had a listless feel. The biggest rise from the crowd came when Vincent Lecavalier dropped his gloves for the second time during the second period.

Lecavalier, who has suffered through a disappointing season, entered with 14 penalty minutes for the season but had 22 minutes through 1 ½ periods after a pair of duels with Keegan Lowe, who was making his NHL debut.

Lowe got the better of Lecavalier during a first-period fight before Lecavalier ambushed the rookie while winning their second-period bout. For that one, Lecavalier got an instigation penalty and 10-minute game misconduct in addition to a fighting major.

There probably was some frustration released for the veteran forward, who has scored just eight of his 411 career goals this season.

Bellmore tallied his second goal of the season when he tipped Eric Staal's pass from the point past Flyers backup goalie Ray Emery with 7:12 left in the first period to put Carolina on the board.

Murphy beat Emery with a one-timer from the point on a power play with 7:09 remaining in the third period.

Couturier tipped home Mark Streit's shot from the point with 3:41 left to pull Philadelphia within a goal.

Cam Ward made 27 saves, improving to 4-0 against Philadelphia this season.

Philadelphia failed to score on the power play, going 0 for 2, to snap a seven-game streak with a goal on the man advantage.

Notes: Lowe is the son of Kevin Lowe, the Oilers' team president. . Philadelphia closes its season by hosting Ottawa on Saturday afternoon, while the Hurricanes end at home against Detroit on Saturday night. . Dating back to last season, the Flyers have lost four straight and eight of nine to Carolina. . Flyers C Claude Giroux had an assist, giving him seven goals and five assists in his last 12 games.