Flyers fall to Sharks, 3-2, in shootout 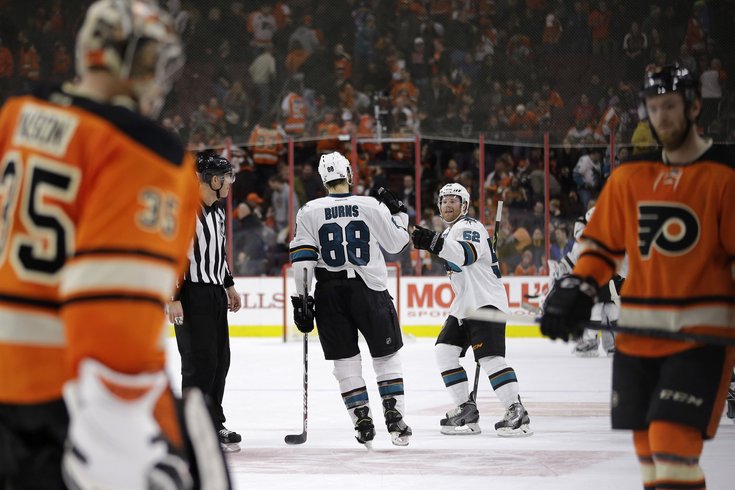 Matt Irwin and Joe Pavelski scored in regulation, and Brent Burns got the winning goal in the shootout to lead the San Jose Sharks to a 3-2 victory over the Philadelphia Flyers on Saturday.

Michael Raffl and Claude Giroux scored and Jakub Voracek had a pair of assists for the Flyers, who fell to 3-10 in shootouts this season. Voracek upped his total to 76 points — falling two points behind league-leading Sidney Crosby, who had three points in Pittsburgh's win.

The game pitted two perennial postseason teams who likely will be out of the playoffs this season. Philadelphia began Saturday 11th in the East, nine back of a wild-card spot, while the Sharks were eight points out of a berth in the West. San Jose hasn't missed the postseason since 2003, and the Flyers and Sharks last missed the postseason in the same year in the 1992-93 season.

The Flyers' playoff chances have been hurt by teams such as the Sharks, who are on the outside of the playoff picture. Philadelphia is 0-9-3 since Feb. 17 against teams that began play Saturday out of the top eight in their respective conferences. Over the same stretch, the Flyers are 6-1-1 against teams who began among the top eight.

Voracek opened the shootout by beating Alex Stalock, but neither Giroux, Matt Read, Sean Couturier nor Vincent Lecavalier were able to score. San Jose's third shooter, Melker Karlsson, tied the shootout at 1 and Burns scored on a backhander to win it.

Giroux tied the game at 2 with 11:23 remaining in regulation when he scored on the power play with a wrist shot from above the left circle.

Pavelski tallied the go-ahead goal, his 36th, on a power play with 3:15 left in the first period when his pass from behind the net when off the skate of Flyers defenseman Brandon Manning and through Mason's legs. The goal originally was disallowed because a referee's whistle had blown but was counted after a video review.

Irwin fired a wrist shot from above the left circle over Mason's right shoulder to give San Jose a 1-0 lead 4 1/2 minutes into the contest. The Flyers tied it just under two minutes later on Raffl's 20th goal of the season.

Nicklas Grossmann's shot from the point deflected off the stick of one Sharks defender and the foot of another before ricocheting off Stalock's blocker and then the post. The rebound fell to Raffl, who knocked it home to make it 1-1.

Stalock, playing in his first game since March 2, improved to 7-7-1 this season.

• Flyers D Carlo Colaicovo and Mark Streit were late scratches due to the flu, and Philadelphia called up rookies Oliver Lauridsen and Mark Alt from the AHL to replace them. Alt made his NHL debut.

• Manning also was called up to replace Andrew MacDonald, who fractured his right hand in Wednesday's 4-1 win over Chicago and is out for the season. RW Wayne Simmonds (fractured left leg) also suffered a season-ending injury against the Blackhawks.

• Sharks D Mirco Mueller (left hand/wrist) was scratched after getting hurt on Thursday. He was replaced by Irwin.

• San Jose has won seven straight over the Flyers in Philadelphia.