Flyers fall on the road to Hurricanes, 4-1 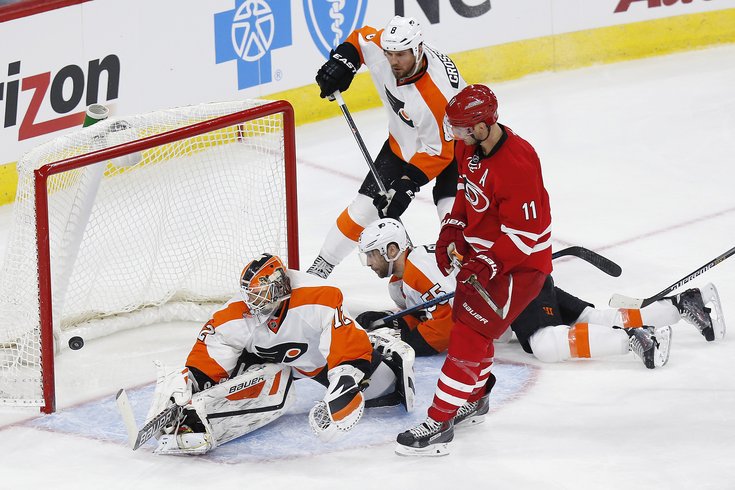 Hurricanes' Jordan Staal gets the puck past Philadelphia Flyers goaltender Rob Zepp, as well as Nick Schultz and Nicklas Grossmann,

RALEIGH, N.C. — Justin Faulk had a goal and an assist and the Carolina Hurricanes beat the Philadelphia Flyers 4-1 on Tuesday night.

It was the 500th NHL game for Hurricanes goalie Cam Ward. Ward, who won the Conn Smythe Trophy when Carolina won the Stanley Cup in 2006, made 23 saves.

Nicklas Grossmann scored in the first period for the Flyers, who lost in regulation for just the second time in their past 14 games (8-2-4).

The Flyers (63 points) are four points behind the Boston Bruins for the final playoff position in the Eastern Conference.

Faulk got the Hurricanes on the board on a power play at 7:29, receiving Eric Staal's pass on the left point and one-timing it past Zepp's stick side.

Grossmann tied it from the left circle at 17:46, beating Ward through traffic with Jakub Voracek on the primary assist. It was Voracek's 45th assist and 64th point of the season.

Skinner put Carolina ahead again on a rush at 2:16 of the second, taking Semin's pass and banging the puck past Zepp's stick side.

Jordan Staal made it 3-1 on a power play at 15:55 of the second, scoring on a rebound with Semin on the primary assist.

McClement capped the scoring at 14:37 of the third with Brad Malone — playing in his 100th NHL game — on the assist.

• Ward is one of just four active goalies (the Rangers' Henrik Lundqvist, Pittsburgh's Marc-Andre Fleury and Buffalo's Ryan Miller) to have appeared in at least 500 games with one team)

• Philadelphia visits Toronto on Thursday night, while Carolina's next game is on Friday at home against Washington. ... Flyers G Ray Emery did not make the trip and is day to day (lower body).

• Carolina healthy scratches were D John-Michael Liles — whose next NHL game will be his 700th — along with LW Chris Terry and C Andrej Nestrasil.

• It was the third of five games between the teams this season. The teams' final two meetings are April 4 in Raleigh and April 9 in Philadelphia.