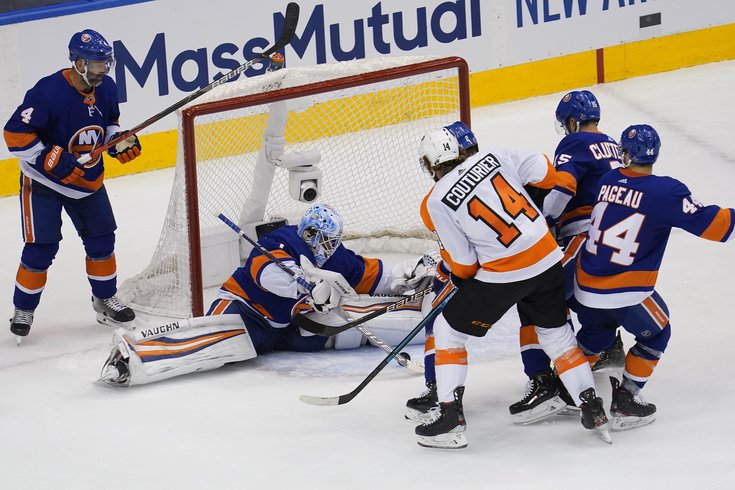 The Flyers finally got (a little) production from players on their top two lines.

First the good news: they're not dead yet.

Now the bad news: they might as well be.

The Flyers showed flashes of being the best team in the bubble, like they briefly were back what seems like ages ago. The East's No. 1 seed played well enough to win in Game 4 against the Islanders Sunday, but that's not enough to win playoff hockey games. They fell, 3-2, and now on the brink of elimination.

In the setback, Philly lost consecutive games in the postseason for the first time since entering the Toronto bubble back in July and will need to play perfect hockey three more times to continue their Stanley Cup push.

Oskar Lindblom skated with the Flyers pregame Sunday night, in what a very smart strategic move for a team that looked devoid of inspiration late in Game 3. Though he won't return in this series, his recovery from bone cancer (Ewing's sarcoma) has been a big source of motivation for the Orange and Black all season. He may find his way back into the line up if the Flyers do keep their season going deep into September.

Oskar Lindblom skates with the team ahead of tonight's game. pic.twitter.com/K4AowzdivK

But let's be honest, if they want Lindblom back, they'll need to avoid the pitfalls of Game 4 (and Game 1... and the middle of Game 2... and Game 3...). Here's a look back at their most recent bitter and tough loss:

For the first time in the last two series, and the second time in the playoff bubble, the Flyers elected not to go with their ace 22-year-old goaltender Carter Hart.

Sunday was, of course, the second of two games on back-to-back days, but was preceded by three days off for Hart and the Flyers prior to their stinker in Game 3. Hart no doubt deserves a ton of credit for a lot of Philly's success thus far this summer, but he did just play one of his two worst games since the re-start.

In his stead, Brian Elliott got the nod, making his first start in 24 days. New York countered with their own No. 2, Thomas Greiss. In a first period lacking in explosive plays, Elliott made the most of his playing time, helping to fuel two key early penalty kills.

In that first frame, the Isles looked to have a much more aggressive and coordinated attack than Philly did, shooting at Elliott 18 times (out-shooting them 18-2 after the Flyers fired the first five of the game).

Elliott was good — but not great. Was there a noticeable drop off from the regular play of Hart? That's really hard to say. The offense certainly didn't do enough to help, but the Flyers' backup goalie could have been better, and wasn't.

In all, Elliott stopped 29 shots and kept the Flyers in the game for all 60 minutes, but he'll almost surely hand the blockers back to Hart for Game 5.

The Flyers' were regular season killers with an early lead — and in the second and third periods. In their 69 games, they out-scored opponents 166-123 in the second two sessions, and scored the most goals of any period in the third.

But their series with the Islanders has seen, well, a substantial drop off.

#Flyers have no goals in the second or third periods in this series, @JHallNBCS points out.

The second period Sunday night was pretty much like all the others this series until Philly got some juice and shots on net a few minutes in, with the closest to a goal resulting from this clank off the post from Tyler Pitlick:

hey @posts, can you not. pic.twitter.com/A2x8InMVFo

The momentum was very short lived, as a turnover from Phil Myers in the defensive zone led to the first score of the game, a shot from the slot by Brock Nelson to beat Elliott, putting the Islanders ahead 1-0.

Finding some rhythm and keeping the puck in their end, the Flyers finally got some offense with a huge goal from Sean Couturier to equal things at one-all (breaking the aforementioned cold streak). The strike came on a shot from the point into traffic that the Flyers' center was able to redirect.

The second would prove to be a pivotally effective period for the Flyers, as they out-shot the Islanders 17-3 in those 20 minutes. Unfortunately it would be all for naught as they were beaten at the net, badly, in the third.

Of course, this tweet didn't stay true — as the Flyers finally got a third period goal with 1:04 to play and six skaters. It was an Ivan Provorov hard shot from the point to cut the deficit to 3-2.

Despite their dominating play in the latter part of the game, the Flyers gave up a breakaway goal midway through the third, as J-G Pageau poked the puck through Elliott's five-hole on a save that the netminder really should have made.

The pain intensified for the Flyers (and their fans) as another odd man rush ended up with nylon for the Islanders, with a stellar pass on a two-on-one from Josh Bailey to Nelson, making Matt Niskanen look like a fool (he had a chance to prevent it with better stick work).

Islanders have now outscored Flyers 8-0 in third in series 🤦🏼‍♂️

Heading into Game 5 to be played Tuesday at 7 p.m., the Flyers have their backs against the wall and then some.

Philadelphia is no stranger — historically — to being behind 2-1 in playoff series, as it has faced that same deficit 30 times previous to this season. In those 30 instances, Philly came back to win seven times (23% of the time). Interestingly, they haven't won a series when trailing 2-1 since 2003, beating the Maple Leafs in seven games — an eight-series streak. In their last Stanley Cup appearance, Philly was down 2-1 to the Blackhawks in 2010. They also lost most recently to the Penguins in six games in 2018, trailing after three.