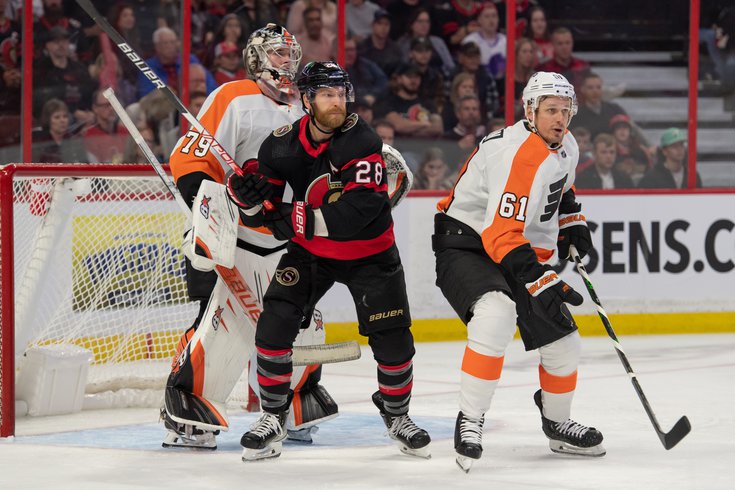 Claude Giroux against the Flyers Saturday night as an Ottawa Senator.

Claude Giroux entered Saturday night one goal away from the 300th of his NHL career.

So of course he gets it when the Flyers are in town.

Less than three minutes into Saturday night's game up in Ottawa, the Senators' top line of Giroux, Tim Stützle, and Brady Tkachuk stormed into the offensive zone, with the former Flyers captain chipping the puck past goaltender Carter Hart to finish off the play.

Giroux, who spent 15 years in Philadelphia and grew into the face of the franchise, was dealt to the Florida Panthers ahead of the trade deadline last March as the Flyers were completely bottoming out.

In the offseason, the 34-year-old signed a three-year deal with his hometown Ottawa Senators and has since settled in nicely as a veteran presence for a promising young forward core.

The Sens are still looking for stable ground with a 4-7-0 record after the Flyers beat them 2-1 Saturday night, but Giroux is carrying a line of six goals and four assists (10 points) through 11 games.

Ottawa will travel to Philadelphia next Saturday, setting up Giroux's homecoming for the first time since the trade.

"Philly fans, so they might give me a standing O, and then they might boo me," Giroux told Ottawa's Wally & Methot Show over the summer. "So that's what I expect and I wouldn't ask for anything else. I mean the Flyers fans are absolutely nuts. Playing in front of them, their passion, their intensity, it's just something I can relate to.

"Yeah, they're tough on their players, but when it goes well, they're just great fans."