Through cheers, 'Rouxs,' and boos, Claude Giroux stays steady in return to Philadelphia

The Senators took the game. Giroux took the day. 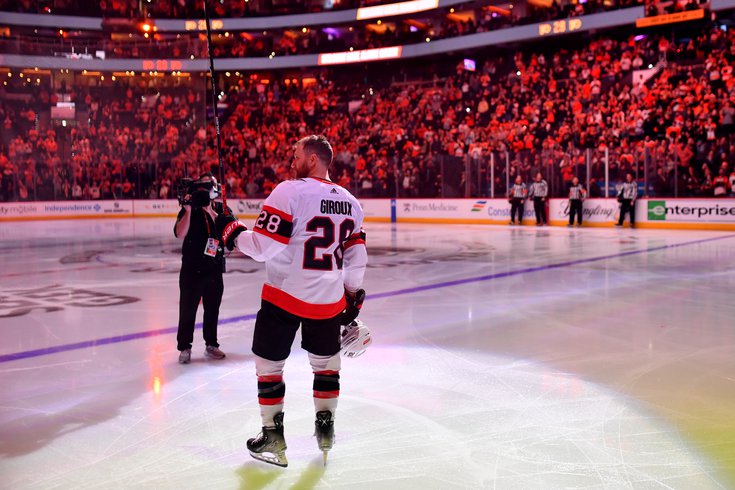 Former Flyer Claude Giroux salutes the Wells Fargo Center crowd pregame in his return to Philadelphia as a member of the Ottawa Senators.

The spotlight was all Claude Giroux's.

Before puck drop Saturday afternoon, the lights dimmed at the Wells Fargo Center and a video tribute running back through the former captain's greatest moments in orange and black played on the scoreboard.

Cheers and applause from a crowd rampant with No. 28 Flyers jerseys grew louder as the video went on, and when the camera cut to Giroux on the ice, now wearing the red and black of his hometown Ottawa Senators, fans roared one last, grand "Rooooouux!" in appreciation.

"I wish they would've shown it after the game," Giroux, who was also cheered for as the last name announced in the Sens' starting lineup, joked afterward. "They showed the video and I had to go for a shift right away. That was tough...It's part of the game. You have to be professional and just do your job."

This was always going to be a game where, for most Flyers fans watching, the final score didn't necessarily matter. The result did eventually go to Ottawa in a 4-1 win that Giroux, who had two assists, said his team really needed.

But the day, no matter how he felt about it, was always going to be his, through all the cheers, "Rouxs," and maybe some boos.

"I was expecting to get booed a little bit more," he quipped.

The farewell was eight months ago. The welcome home, in the uniform of another team, finally came Saturday. Both hit hard.

The memories from the last 15 years – from the Cup run to the Crosby hit to the Stadium Series winner – were as fresh as they ever were. So was the end of his era of Flyers hockey.

"It was tough," Giroux said. "Fans here were...I wasn't too sure what to expect, but they treated me well. So many memories in this building..."

"I've never done this before, coming back to a team you've played for a long time," he later added. "Just coming in the building, the people that work here, the faces that I've seen for 14 years, just great people...It was fun for us. We were able to get a big win that we needed."

He tried to stay steady through it all.

Giroux has never been big on the attention. He was forward about that in the leadup and aftermath of his farewell game, the 1,000th of his NHL career, back on March 17 last season.

But he understood it.

The Flyers had bottomed out and Giroux, who grew into the face of the franchise and one of the Flyers' greatest ever through his 15-year run in Philly, was on an expiring contract, still looking for a shot at the Stanley Cup.

No one could say it in the moment, but everyone knew it was goodbye. The trade to the Florida Panthers followed soon after, then the eventual summer that saw him sign a three-year deal to go home to Ottawa.

He understood Saturday too.

It wasn't his first time facing the Flyers. That came last week up in Ottawa. But it was his first time back in Philadelphia, back in a building with fans he spent 15 years skating in front of, fans that grew to love him and welcomed him back to the Wells Fargo Center with open arms.

"A little similar," Giroux said of how the two games compared. "I think I had a harder time with the game last year, just because...There was a lot going on that night and tonight I was...I think that game last year helped me for this year to understand that, yeah, it's good to enjoy it but at the end of the day, you have to play your game and there's a game to be won."

Again, he tried to stay steady.

But it was tough.

A heavier crowd than usual gathered by the visitors' end of the ice for warmups, with fans pressing signs up against the glass showing thanks and welcoming back their former captain.

As the Senators walked out of the tunnel, they waited with bated breath for Giroux to emerge, then cheered when he finally hit the ice.

One of the fans holding up a sign was nine-year old Brody Miller from Maple Shade, with the simple message "Welcome home, Giroux" alongside some hand-drawn Flyers logos.

"Claude Giroux is his guy," his father, Nick Miller, said watching from a couple rows behind.

Brody didn't like the trade when it happened and said the idea of Giroux in another team's jersey was weird. But he wanted to see him again nonetheless.

He didn't expect his sign to get him noticed, figuring his favorite player would just skate by during his usual pregame work.

But as Giroux zipped past, his head turned back for a second to peer the message out of the corner of his eye.

He saw it. He probably saw all of them.

But he tried to stay steady.