The Flyers are on the cusp of their third 10-plus game winless streak in a year. 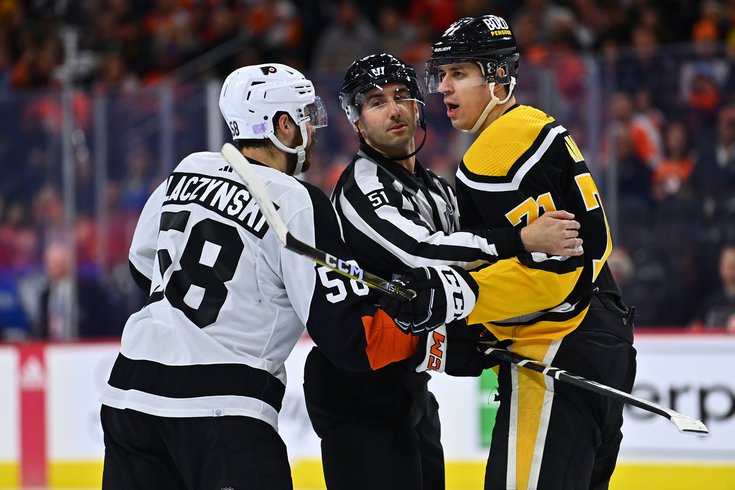 Flyers forward Tanner Laczynski gets into it with Penguins forward Evgeni Malkin during Philadelphia's loss on Black Friday.

Lou Nolan announced the Penguins' starting lineup on Friday and "sucks" chants from the crowd followed each name, with the loudest of them all reserved especially for Sidney Crosby, just like always.

Even in rough times, and even with a relatively sparser turnout than years' past, the Flyers-Penguins rivalry still mean something to Philadelphia.

This team still means something to Philadelphia.

But boy, have both seen better days.

The Flyers, already banged up and beaten down just a quarter of the way through the season, never stood a chance against a Pittsburgh team that made the call to ride the Crosby-Evgeni Malkin-Kris Letang core into the sunset over the summer.

They were routed 4-1, and have now lost nine straight to put them on the brink of their third winless streak of 10 games or more within a calendar year.

The Wells Fargo Center crowd, or what was left of it from the fans who didn't head to the parking lot early, booed the team off the ice as the final horn sounded. Who could blame them?

"The whole outlook of the game... We were flat," head coach John Tortorella said. "We'll play another game tomorrow."

The Flyers – who have Travis Konecny, Wade Allison, James van Riemsdyk, Sean Couturier, and Cam Atkinson all sidelined with various injuries for significant stretches of time – iced a lineup that, to put it gently, is at a severe lack of talent.

Can only do so much with a lineup like this.

They got the jump early. Kevin Hayes forced a turnover in the offensive zone that led to a quality scoring chance for Noah Cates, and through the first several minutes, the Flyers were outshooting Pittsburgh 6-2.

But that burst didn't last long. Justin Braun, with the puck on a neutral zone draw, whiffed on a D-to-D pass. Teddy Bleuger recovered it and stormed in toward Carter Hart on a 2-on-1. His shot bounced off the pad and Josh Archibald was there to put it home. 1-0 Pens with the rink going downhill for them.

It stayed that way.

In the dying seconds of the first, Crosby, with Kevin Hayes trying to cover him in the slot, redirected a Marcus Pettersson shot from the point to send Pittsburgh up 2-0. Hayes was demoted to the fourth line to open the second.

Ryan Poehling scored the next two to make it a 4-0 game, with his second chasing Hart from the net for Felix Sandström. It was a mercy pulling more than anything.

"Had nothing to do with Carter," said Tortorella, who had all short answers postgame. But then again, what can he really say at this point?

What can he even do?

For the Flyers to have any success, they have to outwork every single team they face.

They did that opening night against the Devils, and for a few games after that had them looking pretty okay.

But at a certain point, the lack of talent catches up to you. Injuries catch up to you, and at this point, in a nine-game rut, they already have.

"No excuse though," said Nic Deslauriers, who fought Pettersson in the second period in an attempt to spark the team. "I think that's a chance for young guys and myself to prove that we want to play more. We can't go down that path of saying 'injuries, injuries.' Yes, we have some good players that are out, but those are times to prove that, for the organization, if you're a young guy, you want to be an NHLer and if you're a guy like me on the fourth line you want to play more."

The franchise record for most games without a win is 13 in a row – set between December 31 and January 25 of last season when the wheels had completely fallen off – and with the Islanders up Saturday (Part 1 of a home and home), and the Lightning, Devils, Avalanche, Capitals, and Golden Knights all on deck, that record could be in serious danger of getting broken again if something doesn't get figured out quick.

The Flyers will have a bus ride to Long Island to think things over, Deslauriers said, but there is probably a lot to think about.