Flyers GM Chuck Fletcher on Ryan Ellis: 'My assumption is he won't play this season'

Fletcher said Ellis is out indefinitely, Sean Couturier is getting a second opinion on is back, and Joel Farabee is skating non-contact 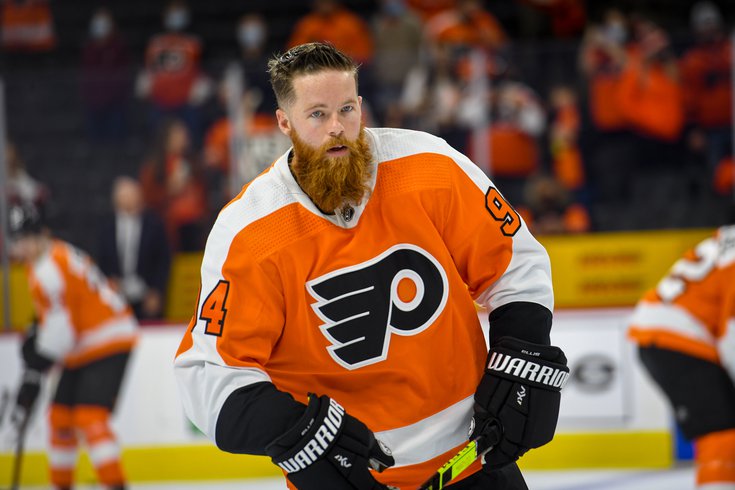 Chuck Fletcher met with the media to begin training camp on Thursday and offered a few injury updates.

Sean Couturier, who was reported to have re-injured his back, was scheduled to see a specialist Thursday morning for a second opinion. He's still week-to-week for now.

Joel Farabee, who had sudden disc replacement surgery in his neck earlier in the summer, is cleared to participate, but is non-contact. He's making progress though. He's also week-to-week.

"Ryan Ellis is out indefinitely," Fletcher said. "No timetable for his return to play. I'll just say that my assumption is he won't play this season. If he does it'll be a bonus."

Is his injury career-threatening at this point?

After arriving in the trade from Nashville last summer, Ellis' Flyers tenure has been vague and brutal.

Initially planned to be Ivan Provorov's partner on the top defensive pairing, he played just four games then disappeared with a lower-body injury that the team only really ever described as "multi-faceted."

On Thursday morning, Fletcher finally shed some more light on what exactly the issues are and if surgery is on the table now after it wasn't for so long.

"The problem, I know we've been probably vague with describing the injury, I think we called it multi-faceted, which it is," Fletcher said. "There's a psoas component of this, there's a hip component, there's an ab component. So I'm not sure if you go in and repair one part, it's gonna fix everything. we're trying to work with getting everything back, rehabbing everything back.

"I've never heard of an injury like this, it's very complicated. A torn psoas is a very significant injury for a hockey player, a very rare injury. We're doing the best we can and we'll just leave it up to the medical experts."

Ellis did an exit interview with the media at the end of last season and was initially optimistic about his rehab plan and a goal to be ready for camp. Fletcher was too. But as the summer went on, that optimism waned.

"The rehab, there's been ebbs and flows," Fletcher said. "I think he made progress earlier in the summer. I would say the last two months, there haven't been any visible signs of progress.

"It's been a frustrating injury. Nobody's more frustrated than Ryan. Nobody wants to play more than Ryan. But we're dealing with reality now. He's not skating, so clearly he's a long way from playing."

And now you have to wonder if that's if he ever plays again.

"Extremely frustrating for him," Fletcher said. "I don't think he ever expected to be traded from Nashville. I think he thought he'd be a Predator forever. He got over the initial shock of being traded, he came in, dove right in, and was a great teammate. He took Ivan Provorov under his wing. They had breakfast, lunch together every day. They were inseparable trying to build that chemistry, was so excited to start the season.

"When he played, played well. No one wants to play more than Ryan Ellis, and I know people in this market haven't had a chance to see him. High-end competitor, very good player. It's been very difficult on Ryan as a human trying to get healthy and be a part of what we're building here."