Sanheim will remain in Philadelphia at $6.25 million per year 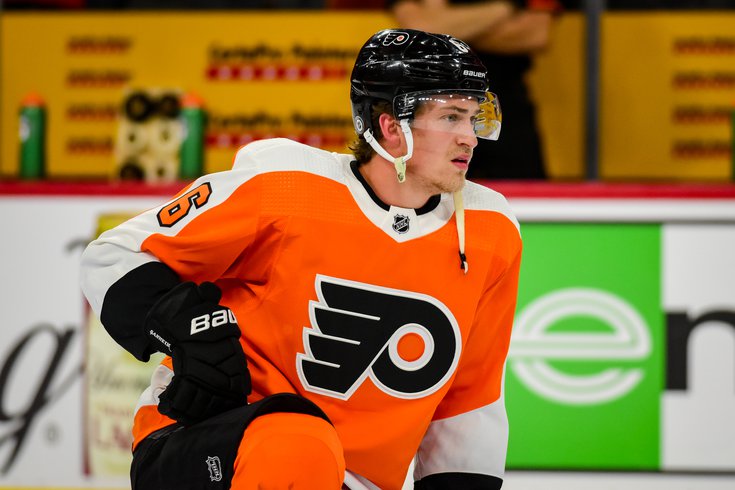 Travis Sanheim is here to stay.

The Flyers are likely in for a long season, but it at least started on a positive note.

Travis Sanheim has signed an eight-year, $50 million contract extension, keeping the 26-year-old defenseman in Philadelphia for the long-term.

The deal was announced by the team just prior to Thursday night's season opener against the Devils and will carry an average annual value of $6.25 million.

"Obviously, I'm really excited," Sanheim said in a statement. "It's a huge day not only for me, but for my family and friends as well," said Sanheim. "To be drafted not only by Philly, but in Philly, and now to sign a long-term deal here, it means a lot. I love this city, love the fan base and I'm excited to turn this around and get things going. There's no better place to win than Philly."

Sanheim racked up seven goals and 24 assists last season for 31 points and led the team in plus-minus at +9.

In a year where next to nothing was going right for the Flyers, Sanheim, at least, was by far their best blueliner and took a big step forward in his development in the back half of the campaign, averaging 22:58 of ice time usually with Rasmus Ristolainen on the second pairing.

Taken 17th overall in the 2014 draft right here in Philadelphia, Sanheim was projected as a major piece in former GM Ron Hextall's slow but sure rebuild and made his NHL debut three years later in 2017.

Hextall's vision, however, fell through, and current GM Chuck Fletcher ultimately couldn't pick up the pieces despite a highly successful year that fell a game short of the Eastern Conference Finals in 2019-20.

Now, with John Tortorella behind the bench and the Flyers seemingly in a holding pattern this season, Sanheim at least will be a lock for whatever the club morphs into going forward.

"We're extremely happy to have Travis under long-term contract and see him as a key piece of our team's future," Fletcher said in a statement. "Travis has improved each season to become a highly reliable player and key contributor on our blueline. Furthermore, he is someone who has developed his entire career with us and has grown into a valuable leader for our team."

Sanheim had one more year remaining on his current deal at $4.675 million and news on contract talks was pretty quiet throughout the summer, but now one of their biggest pending contract expirations has been taken care of just before the first puck drop.