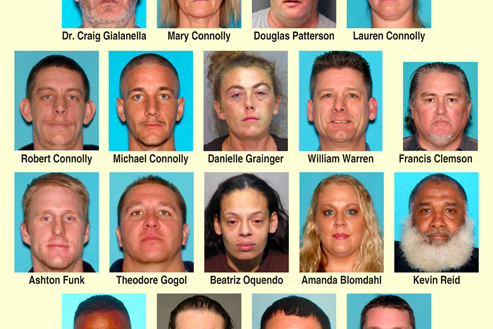 A former Margate firefighter and lifeguard known for losing his job after shoplifting from a Wawa store was one of 18 arrested Wednesday in a sweeping bust of an Atlantic County drug ring.

One of the alleged dealers included in Wednesday's arrests, Ashton Funk, 35, of Northfield, Atlantic County, made headlines in the summer of 2015 when he stole $7.98 in goods from a Wawa in Margate. Funk was a firefighter and lifeguard who had been a perennial rowing champion in lifeguard races at the shore. He earned a salary of $78,096 before losing both jobs for the theft at the start of 2016.

He was found guilty in a neutral Egg Harbor Township Municipal Court and unsuccessfully appealed the decision to New Jersey Superior Court.

Another Margate firefighter also appeared to be involved in the ring.

Margate Fire Chief Anthony Tabasso told the Press of Atlantic City on Wednesday that Theodore Gogol, 37, was one of those charged. Gogol, an active firefighter in the Margate City Fire Department, has been suspended without pay, according to the report.

In a press release, the attorney general singled out Gialanella, who allegedly sold prescriptions for cash to the ring of dealers.

"Doctors who act like drug dealers and illegally dole out prescriptions for these highly addictive painkillers are nothing more than drug pushers in white coats,” Porrino said. “And they are even more dangerous than a street dealer, because we trust that our doctors will protect our health and not hurt or kill us."

From Jan. 1, 2016 to Dec. 7, 2016, Gialanella allegedly issued more than 400 prescriptions for about 50,000 30-mg oxycodone tablets in the names of 30 people from the Atlantic County area, including prescriptions for the alleged leaders and members of the ring, according to the press release.

Gialanella allegedly charged $50-100 for an office visit that would last a few minutes and did not involve any type of exam, testing or treatment. Each visit would end with Gialanella allegedly writing prescriptions for 90 or 180 tablets of 30-miligram oxycodone tablets and 90 2-millimeter tablets of alprazolam, according to prosecutors.

The charges stemmed from "Operation Oxy Highway," an ongoing investigation targeting doctors who dole out drugs to dealers.

The full release from the Attorney General's Office can be found here.