Four boogie boarders swept out to sea at Jersey Shore

Aided by Good Samaritans, the Coast Guard was able to locate and rescue the four females 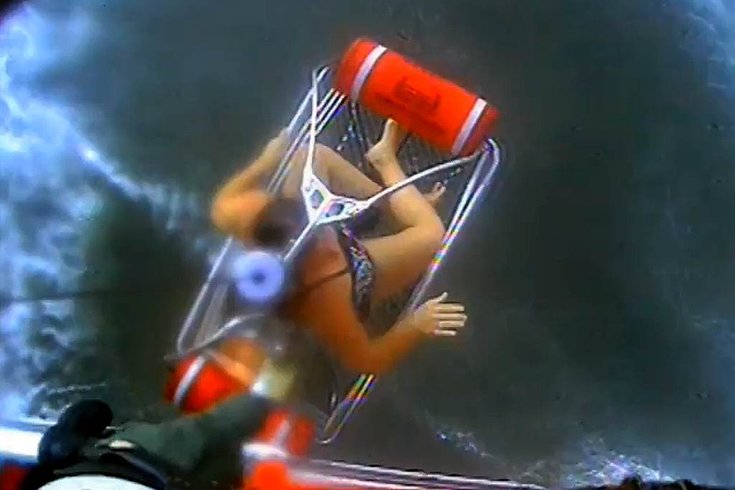 A Coast Guard helicopter crew rescues four people who were swept out to sea on their boogie boards off Strathmere at the Jersey Shore on Wednesday.

Four boogie boarders were swept out to sea this week at the Jersey Shore.

With help of Good Samaritans, the Coast Guard was able to rescue them.

The four females went out to sea off Strathmere about 7:30 p.m. Wednesday. Fortunately, they were spotted by two people in a canoe. The canoers reported the situation to watchstanders with the Coast Guard Sector Delaware Bay and informed the group was off Corson Inlet, between Strathmere and the south end of Ocean City.

Two MH-65 Dolphin helicopter air crews from the Atlantic City station were diverted from training flights to the area, the Coast Guard said.

The canoers attempted to help the distressed boogie boarders, but capsized in the process. Wearing life jackets, they were able to swim to shore, officials said.

The air crews lowered a rescue swimmer and four life jackets to the water. It took two runs for all four boogie boarders and the rescue swimmer to be hoisted aboard a helicopter and transported to Corson's Inlet State Park.

"Thanks to some good Samaritans on shore we were able to be notified in a timely manner before dark and effect a rescue," said Lt. Alex Webber, a pilot on the scene. "It is important to know your limits when enjoying the ocean and stop your activity well before you fatigue and before it turns dark."