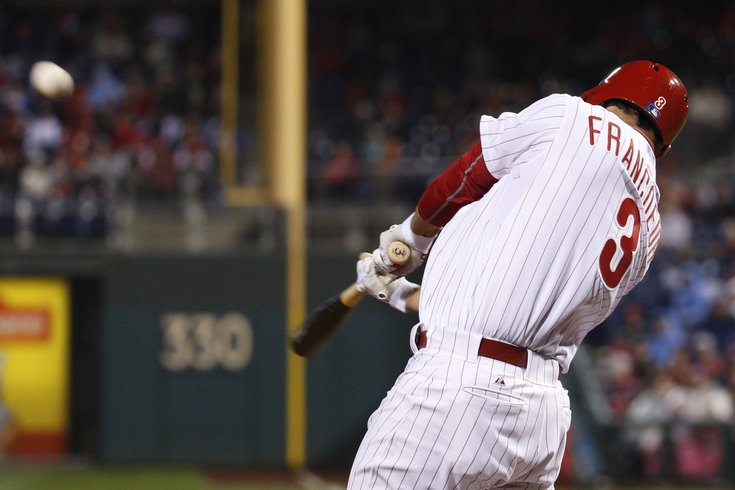 Harang (1-0) gave up two hits, walked one and struck out eight in 6 1-3 innings in his first start for the Phillies. Jonathan Papelbon got four outs against his former team for his first save.

Francoeur went deep for the first time in two years for Philadelphia's first runs this season.

Xander Bogaerts hit an RBI single off Ken Giles in the eighth to cut it to 4-1. Giles struck out pinch-hitter David Ortiz with two runners on for the first out. But he walked Pablo Sandoval to force in a run with two outs.

Papelbon entered and retired Hanley Ramirez on a deep drive to left with the bases loaded to end the inning. Ramirez hit two homers, including a grand slam in Boston's 8-0 win on opening day.

The Red Sox got Porcello from Detroit in an offseason trade for slugger Yoenis Cespedes. They made sure he wouldn't test free agency after the season by giving him the most lucrative contract for a pitcher in franchise history.

Porcello ran into trouble in the sixth when he walked Darin Ruf on a close 3-2 pitch. Cody Asche followed with a single. Francoeur then drove one out to left-center for his first homer since June 16, 2013, for Kansas City at Tampa.

Francoeur bounced around the majors in recent years and even tried pitching for San Diego's Triple-A team last year. He was on the bubble to make the Phillies' roster until the final day and got the start in right field against Porcello instead of left-handed hitting Grady Sizemore because he was 7 for 19 against him entering the game.

On a chilly, rainy night, Harang retired the first 11 batters he faced before Sandoval lined a single to center for his first hit with the Red Sox.

Chase Utley's sacrifice fly in the seventh inning made it 4-0.

Red Sox: RHP Joe Kelly, who was slowed by a right biceps injury in spring training, will make another start in the minors before joining the rotation. Knuckleballer Steven Wright will start at the New York Yankees on Saturday in his place.

Phillies: CF Odubel Herrera wasn't in the starting lineup because his left foot was still sore after he hit a foul off it on opening day. He entered as a defensive replacement in the eighth.

RHP Justin Masterson makes his first start for the Red Sox since 2009 in the series finale Thursday night. Masterson, who was traded to Cleveland six years ago, was 7-9 with a 5.88 ERA for the Indians and St. Louis last year. RHP David Buchanan takes the mound for Philadelphia. He was 6-8 with a 3.75 ERA as a rookie in 2014.

The teams will wear retro 1915 baseball caps on Wednesday. The Red Sox beat the Phillies in the World Series that season.