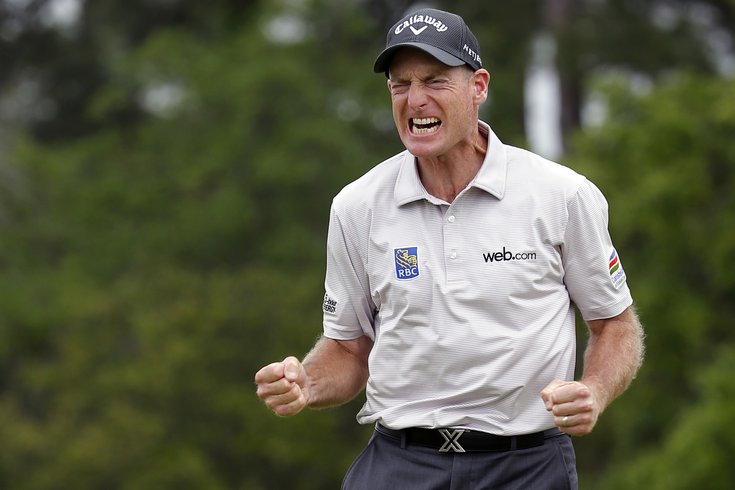 Jim Furyk reacts after his winning putt on the 17th hole against Kevin Kisner during the playoff of the RBC Heritage.

HILTON HEAD ISLAND, S.C. — Jim Furyk had gone 100 starts without winning, a stretch that gnawed at his psyche and challenged his confidence.

That all disappeared in uncharacteristic fashion Sunday when he won his first PGA Tour title in five years with birdies on both playoff holes to outlast Kevin Kisner at the RBC Heritage. When the winning putt fell on the par-3 17th, the typically reserved Furyk dropped his putter and punched the air.

"I think getting excited on 17 there was a lot of pent-up frustrations," he said.

When his long putt on No. 8 rolled in, Furyk said he began to think "this may be the day." Kisner, though, chased him down on the back nine.

Furyk won for the second time at RBC Heritage, the other coming in 2010 in what turned out to be the best year of his career. He won two other events, including the Tour Championship, and captured the $10 million FedEx Cup.

Furyk won the 2003 U.S. Open and entered this tournament ranked 10th in the world, but he has struggled to close out events. He was 0-of-9 when leading tournaments after three rounds since that Tour Championship victory. He is 44 and always believed he'd win again.

"But I was starting to feel like this game is beating me up, and the losing hurts a lot more than winning feels good," he said. "I think I just forget how good" it feels to win.

With that came a $1.062 million payday. For Kisner, it was his best finish on the PGA Tour.

Furyk led by a stroke when Kisner birdied the 72nd hole to force the playoff, the fourth in the last six tournaments at Harbour Town Golf Links. On the first extra hole, Kisner rolled in a second straight birdie putt on the 18th. But Furyk answered with a birdie to keep the playoff going. After Kisner missed his birdie try on No. 17, Furyk sank a 12-foot putt for his 17th career PGA Tour victory.

It was an odd tournament for Furyk.

He looked as if he'd get left behind early, making 18 pars in the first round to fall five shots back. Furyk found his game Friday with eight birdies on the way to a 64. He had a 68 Saturday, yet knew he needed to fire himself as he did Friday to have a chance.

Boy, did he ever.

Furyk had six birdies on his first nine holes, including a 48-footer on the par-4 eighth that moved him in front. A bogey on the 11th dropped Furyk into a four-way tie for first, but he responded with birdies on three of the next four holes and seemed set for an easy ride.

When his long putt on No. 8 rolled in, Furyk said he began to think "this may be the day." Kisner, though, chased him down on the back nine. He birdied the 14th and 15th to pull within a stroke and stuck his approach on the signature lighthouse hole at No. 18 within 7 feet for a tying birdie.

Kisner kissed his wife, Brittany, and 10-month old daughter Kathleen on the way to the scoring trailer to prepare for more golf.

Furyk is used to such grinding at Harbour Town. When he won in 2010, Brian Davis tied him on the final hole to force a playoff — won by Furyk when Davis struck a loose impediment on his swing and called a penalty on himself.

Kisner expected Furyk, who made 11 birdies in 20 holes, to tie him after his putt on the first playoff hole.

"You don't expect a guy of Jim's caliber to miss a 6-footer straight up the hill," Kisner said.

Merritt fell to third after a third 69. His other score was a course-record tying 61 in the second round Friday. Merritt couldn't keep up with Furyk's charge and lost his chance after hitting out of bounds on No. 12 and taking double bogey. Merritt made up for it a few holes later with an eagle-2 on No. 16.

Spieth closed an amazing five-tournament stretch. He won the Valspar Championship a month ago and followed that with seconds at the Texas and Houston opens before matching Tigers Woods' record of 18 under at Augusta National. For Spieth, 19 of his past 20 rounds have been under par.

Spieth had a whirlwind media tour in New York on Monday and Tuesday before arriving at Hilton Head. Now the 21-year-old Texan wants to get back to Dallas in time to attend the Academy of Country Music Awards. He'll return to golf in two weeks at the World Golf Championship Match Play event.

Tom Watson finally played like his age, the 65-year-old finishing with a 5-over 76 after making the cut at Harbour Town with a birdie on the 18th hole Friday. Watson says playing tour courses is taking a toll on "this old body." ... Golfers went off in groups of three on the first and 10th tees starting at 7:30 a.m. to beat expected stormy weather later in the day.