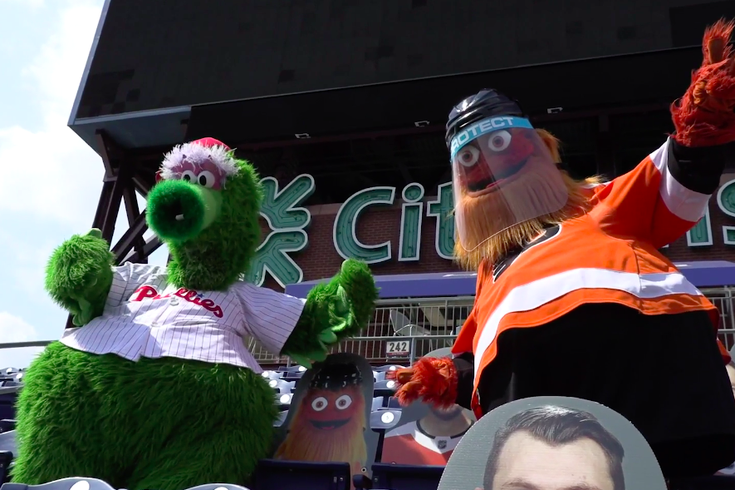 Gritty will now be in attendance for every Phillies' home game this season.

Starting this weekend, the Flyers will be in attendance for every Phillies home game this season.

Every single Flyers player, as well as head coach Alain Vigneault, will have a cardboard cutout situated in Section 242 in left field at Citizens Bank Park for the rest of the 2020 season.

Who was responsible for installing the cardboard cutouts? None other than the Flyers’ beloved orange mascot, Gritty.

In a video released by the Flyers, Gritty can be seen putting the finishing touches of the Flyers players and Vigneault in the upper left field stands.

Then, one of Gritty’s best friends, the Phillie Phanatic, comes running down the steps with a cardboard cutout of Gritty himself.

Not surprisingly, Gritty is amped to have his own cardboard cutout at every Phillies' home game and thanks the Phillie Phanatic for the gesture. The two mascots then do a socially-distanced high five due to COVID-19.

Cardboard cutouts have become a popular way to fill sports venues amid the coronavirus pandemic since fans aren’t permitted to attend games.

The Phillies have filled most of their lower seating level with fans and frontline healthcare workers during the pandemic.

The Philadelphia Union have filled the empty seats at Subaru Park with cardboard cutouts of adoptable dogs from the Philly region.

The top-seeded Flyers are in the middle of their Eastern Conference semifinal series, as part of the Stanley Cup Playoffs, against the New York Islanders after knocking out the Montreal Canadiens 4-2 in the first round.

Meanwhile, the Phillies are 14-14 with 32 games still to play this season. The ball club is tied for second and two games back of the first-place Atlanta Braves in the National League East.