Grocery shopping: Five college players to watch who could interest the Eagles in the 2016 NFL Draft 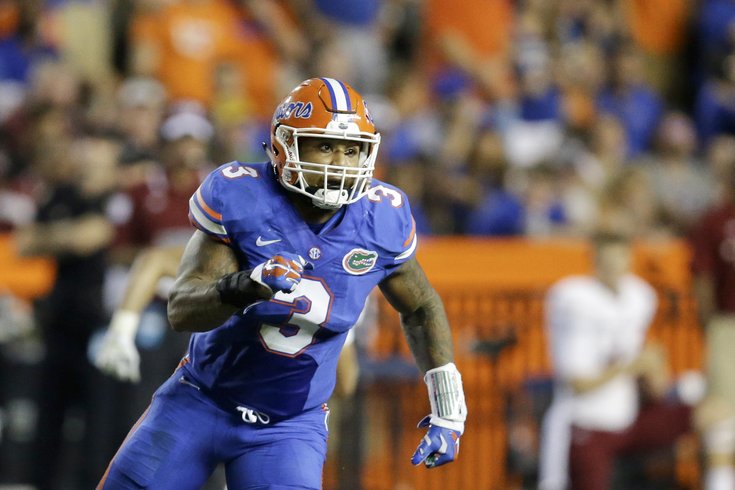 Antonio Morrison hits everything that moves.

As long as you're taking in some college football games today, here are some players who could make some sense for the Eagles in the 2016 NFL Draft.

The Eagles have their best pair of safeties in Malcolm Jenkins and Walter Thurmond since the Brian Dawkins era, so this is no longer the pressing need it once was. Although obviously, the play of the Eagles' secondary has fallen off dramatically in recent weeks. Even with Jenkins and Thurmond staying healthy, guys like Chris Maragos and E.J. Biggers have seen a lot of meaningful snaps. The more players you have in your secondary who can play versatile roles in the defense, the better.

Bell has served both as a nickle back and safety for the Buckeyes, so he fits the bill in terms of the Eagles' preference for safeties who can drop down and play in the slot.

As we've noted, the Eagles also highly value defensive backs who rack up a big number of pass breakups. On the season, Bell has nine PBUs, a very impressive number for a safety. A highlight reel:

Williams is a later-round prospect who has great size and very good receiving skills. On the season, he has 53 catches for 549 yards and 3 TDs. That has earned him an early invite to the Senior Bowl.

That is wholly unjustifiable. The Eagles should be looking to replace Celek with a cheaper developmental option.

For each quarterback we profile, we're going to do an extensive look worthy of its own post. That's what we did for Christian Hackenberg here on Friday. In case you missed any of the other quarterbacks we've profiled, you can catch up on them all below:

Spoiler on Hackenberg: I think he should stay in school. Hackenberg has a stiff test against the Spartans this week.

Tuerk is a great fit for the Eagles for his versatility. His primary position before he went down was center, but he has also played left tackle, left guard and right tackle. He's a rare player you can plug in to play all five positions along the offensive line.

Tuerk is done for the season after he tore his ACL, so obviously, he will not be playing, but let's be real -- you're not going to watch a football game and focus on the center all game, so I'm going to profile him anyway. Obviously, Chip Kelly isn't afraid to take chances on players with injury histories.

At the center position for the Eagles, Jason Kelce has rare athleticism, but he has had a disappointing follow-up to his first Pro Bowl season in 2014. He tore his ACL in 2012, and he missed a chunk of last season after having surgery for a hernia. Kelce returned from both injuries in impressive fashion, so it's too early to call him injury prone, or injury-damaged. Worst case scenario is that Tuerk could serve as a backup both at center and other spots along the OL. Best case is that he earns a starting job somewhere else along the line.

Do yourself a favor and just watch Morrison's game against Ole Miss, and you'll see what Brugler is talking about when he says he's an intense player.

Morrison is a small ILB, at 6'1, 229, but he's a badass who will hit anyone and anything that moves:

The Eagles have numbers at ILB, however, Kiko Alonso has not panned out this season and DeMeco Ryans appears as though he's nearing the end of his career.