How the Sixers solidified their defense vs. Boston Celtics without Joel Embiid 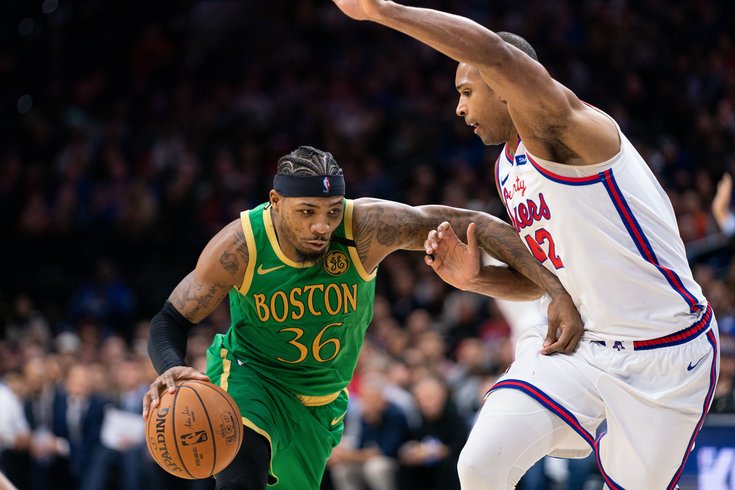 Al Horford looked a lot more comfortable on defense with Joel Embiid out on Thursday.

Playing Al Horford has been an absolute nightmare for the Sixers over the last half-decade. Playing with him, it seemed, was going to be easy. Removing Joel Embiid's biggest roadblock and strengthening the backup plan behind him was the path to a potential Finals appearance.

It has not been that simple in practice. Perhaps it should surprise no one that one of Horford's best defensive performances of the season came on Thursday against the Celtics, with Embiid out and prepping for surgery on a torn ligament in his left hand. 17 points, eight rebounds, and six assists later, Horford emerged with a win over his former team and a win of the season series, with the Sixers in position to perhaps sweep Boston for the year when they return to his former stomping grounds in early February.

They accomplished this, mind you, by simply allowing Al Horford to be Al Horford, instead of asking him to be Joel Embiid. It is the thing that may be the difference when it matters in the spring.

Before Thursday's game, Brett Brown had his scheduled pregame availability with the media following our first update on Joel Embiid's injured left hand. Would the loss of their defensive anchor change how Philadelphia does things? You bet, Brown said, despite insisting the changes wouldn't be radical.

"I'm putting a blowtorch, a bullet, many bullets, into what we used to do," Brown said. "It doesn't fit, and so shame on me to try to make it fit, we don't have Joel Embiid...it doesn't mean we have to completely pivot out to wild stuff that could be reckless, I don't think so, I think it's taking the house we've lived in and moving the furniture around a little bit. That's what I intend to do."

(The mental image of someone lighting furniture on fire, shooting it, and then simply moving it to a different spot in the living room is one I have been laughing at since I re-listened to this quote, for the record.)

The Sixers put those words to action on Thursday night. We still saw Horford in plenty of the "centerfield" coverage that constitutes their base defense, hanging around the free-throw line on pick-and-rolls, and I suspect they're not going to blow that up entirely. But we saw Horford used in a way more akin to how he has played in the past, and Philly reaped the benefits.

"Moving the furniture" mostly meant Horford spending more time around the top of the circle vs. the free-throw line, an important tweak with the Celtics setting a lot of high screens with Daniel Theis. The Sixers didn't suddenly morph into the LeBron era Heat, but they threw some soft hedges and switches at Boston to keep Celtics players guessing.

"It wasn't as conservative as it has been with Joel back there and you've got the comfort level of 7-foot-2, all-league defense," Brown said after the game. "We had many layers to the instruction of what pick-and-roll was going to be...whether someone's in a switch, somebody's in a quick hedge, somebody's back a little bit in a corral-type thing like Al, everyone had to react to kind of a different gameplan."

The Sixers have been toying with Horford playing up more over the last week or so, first seeing real success with it against Oklahoma City on Monday night. As with their recent playcalling kick on offense, Philadelphia's staff dictated a lot of the coverage tweaks. Pushing Horford further up the floor, Horford was able to lean into Boston's perimeter players and play the aggressor, rather than sitting back on his heels.

(For the record, I wanted to make sure I included the full replay on the third clip above where he was called for a foul on Walker, as it looked like a nonsense call to me.)

"As defenders in the perimeter, we get spoiled a little bit because we know if anything, we can send it to Joel and teams are going to struggle," Horford said Thursday. "Changing the way I'm defending the pick-and-roll, for me, I like it more that way. Coach made that adjustment and it worked...I felt like it was better the way we're defending pick-and-roll with me."

Variety was the name of the game. The Sixers threw different coverages at Kemba Walker, used Horford's advanced position to contest pull-up threes, and they didn't allow Boston's high starting points to deter them from trying varied looks.

If there's a case for a higher upside in the playoffs for the Sixers, it rests on the idea that they will be a team that can make these changes on the fly and at high speed come April, which you're not going to see them do in many regular-season games. This one, however, meant something for Philly. With the season series there for the taking, they came in with a playoff-type attitude.

"We talked about, and I never go here, this was a closeout game," Brown said. "You can go 3-0 on Boston. You don't know where that may be able to be cashed in at some point, if at all. But in our eyes in January, this was kind of a unique game."

Ben Simmons deserves the same energy for his defensive performance this season as he does for the lack of improvement as a shooter. His competitive level on defense is a constant on a team erratic in basically every way, and his effort alone saves points every night for Philadelphia.

In a game with a lot of great individual plays on defense, this was the singular highlight for me (and NBATV's social media manager, as it turns out):

Ben Simmons hustles back to make the steal and sets up Norvel Pelle for your Heads Up Play of the Day! 🔥 pic.twitter.com/eS7KOLSj5b

We could sit here and break down scheme frame-by-frame, or highlight Simmons' defense in isolation on guys like Jayson Tatum and Jaylen Brown, which was and has been excellent all season. His ability to fight through screens get low and explode out of a stance, and take on different assignments based on their moment-to-moment needs is astounding.

But the biggest difference between Simmons now and Simmons as a rookie is the focus, energy, and effort to be a great defender in all contexts. Chasing down fast breaks, staying locked in while off-ball, defending No. 1 options rather than being an off-ball menace, all of it is powered by an improved dedication to that end as a worker and a student.

The big surprise from Thursday's win? Norvel Pelle playing a small but important role in the victory. His ability to go up and finish lobs is a great fit for Philly as they fold more and more pick-and-roll into their base offense, and though he is susceptible to lapses in concentration at times on defense, no one can doubt his ability to recover and contest shots at the rim with the best of them.

His most important play of the night, however, was on a shot he neither touched or really attempted to block at all, when he stood tall and forced a Kemba Walker miss standing in the right place at the right time.

The reason most big men struggle to stay on the floor as young men can be attributed to their belief they can (and should) block every shot within arm's reach. Players like Walker prey on this belief, using well-meaning attempts to protect the rim as an opportunity to get to the line. When you have the height advantage on an opponent, you have to trust that it will be enough to get the job done.

Pelle's high-wire act as a shot-blocker and dunker will be the thing that inspires love from the fans. Plays like these earn the respect of the coach, which is ultimately a lot more important for his career.

"He is a rim protector, and then go to offense and say he is a roller, those two things are quite valuable, and he's quite different to our team," Brown said. "You could see why we could look at him like a young prospect that interests us a lot. I thought he was excellent tonight."