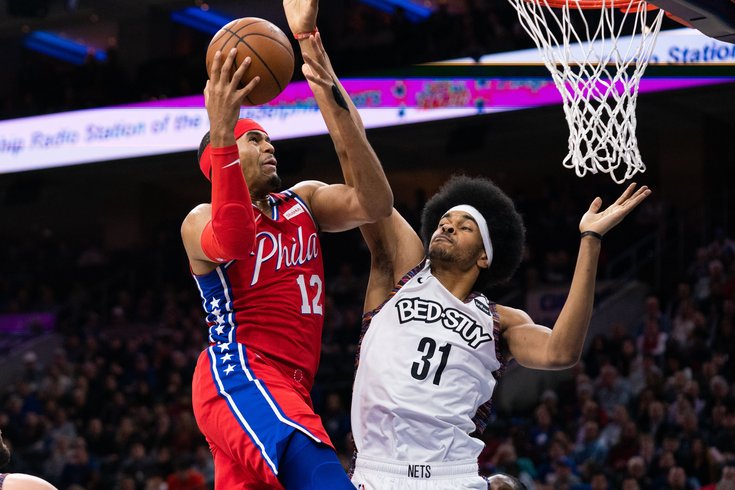 Tobias Harris went off against the Nets Wednesday night.

Behind a huge night from Tobias Harris and a great all-around performance from Ben Simmons, the Sixers got back on the right track with a win on national television, beating the Brooklyn Nets 117-106.

• The Brooklyn Nets did not show any respect to Ben Simmons on the defensive end, sticking centers on him and/or backing so far off of him that his man was almost in the paint. That is inherently not good for Philadelphia, and that has been true for a long time now.

Early on in the game, I thought Simmons deserved some credit for putting an emphasis on attacking the rim despite Brooklyn gearing up to stop him there. We saw him use sagging defenses against opponents a lot during his rookie year, and he did a good job of hunting his own shot early in Wednesday night's game. His post moves were better than we have seen them at pretty much any time all season, and Simmons came up with a couple of nice finishes on footwork alone.

During a stretch in the third quarter with the rest of his teammates struggling, it was Simmons who tried to will things back in the right direction, locking in on defense, crashing the glass, and continuing to try to get to the rim whenever possible. There are nights when it's more than fair to criticize him for shying away in the second half, but he led by example when they needed him to, which is something I'd love to see from him more often.

Some nitpicking — Simmons had a few possessions where he didn't properly punish the Nets for using Kyrie Irving to guard him, and as always his attacking dropped off down the stretch. The Sixers need him to be a four-quarter player on both ends, not just one. But there was far more good than bad on Wednesday, and he was one of the biggest reasons they came away with a win.

• We haven't seen Wednesday's version of Tobias Harris in a bit, and it was a welcome sight with many of his teammates struggling to get it going. Somebody is going to have to do the heavy lifting from deep with the entire team struggling to make shots, and it might as well be Harris, who was paid handsomely in the offseason to help carry this team on offense.

And carry he did during most of the second half against Brooklyn, burning Brooklyn from every area on the floor. He was the release valve for Simmons, an assassin from the mid-post, and when given the chance to run some pick-and-rolls, he certainly did his thing. There were possessions late in the game where the Sixers couldn't generate much of anything on offense — including against a few gadget zone looks — and Harris got buckets anyway.

This is the player Philadelphia expected to get when they inked him to a huge deal in free agency last July. The Sixers are going to have to rely on Harris more and more moving forward, as Al Horford looks horrific right now and there are limitations with their other two perimeter leads.

He has floated into the background some recently, but Harris has shown he is capable of sustaining high-level offense for weeks at a time, and there would be no better time than now to step up.

• Brett Brown keeps giving Furkan Korkmaz a chance to stick in this rotation, and in games like this one against Brooklyn, it's easy to see why. When the Sixers can get shooting around Simmons, he becomes a much more dangerous player, and the Sixers become a lot more dangerous on offense by extension.

Korkmaz is the only guy who gives them some semblance of what JJ Redick and Marco Belinelli gave them on offense in the past, and his ability to hit shots on the move separates him from the rest of Philly's shooters. He and Simmons have a good understanding of where his spots are and when the player and pass need to get there, which helps out a transition attack that hasn't been as dangerous as it should be. Korkmaz was an essential part of the fourth-quarter run that gave them a chance to win.

I kill him regularly in this space for his defensive lapses/weaknesses, and those loom large for this group, but it should be noted that he almost always competes hard and mostly knows where he's supposed to be. As long as you don't ask him to take on assignments beyond his reach, he has shown that he cares enough on that end to get by, particularly when he is cooking from deep.

• It is a shame Matisse Thybulle couldn't stop getting caught with his hand in the cookie jar, because he did a lot of excellent defensive work against a Nets team that puts pressure on your perimeter defenders. Thybulle had some highlight-reel blocks inside and outside of the paint, his first real flash of brilliance there since returning from injury.

Unfortunately, the Nets have three guys who are great at using any cheating instincts against you, and Thybulle was in foul trouble throughout much of Wednesday's game. You can only impact the game if you can stay on the floor, which the rookie is going to have to learn the hard way.

• Josh Richardson couldn't get it going from deep against Brooklyn, but he brought his hard hat on the defensive end. Irving is only just finding his footing after a long stint on the injury report, but he is still a tough guy to guard even on his worst day, and Richardson did a tremendous job of staying in front of him and making Irving shoot tough, contested shots all night.

The Sixers are dealing with a lot of issues right now, but one thing has remained a near-constant — they are competing hard defensively. Richardson has been a leader in that regard, and they have needed him to be.

• After a standout performance against the Boston Celtics last week, Al Horford has gone right back to looking cooked on the defensive end. He has struggled all year defending big men who can get vertical and hurt you on lobs, and much to his chagrin, he was tasked with trying to keep up with DeAndre Jordan and Jarrett Allen, both of whom get into air space he couldn't dream of reaching.

Against Brooklyn, I can understand the Sixers not wanting to play Horford further up on pick-and-rolls and risk getting torched by their guards, but it's not like the alternative was a successful strategy to deal with Brooklyn's bigs. Considering we saw him succeed in containing Boston's perimeter players last week, it seems bizarre that they'd go right back to dropping him in coverage and expecting him to make Embiid-like plays.

But the bulk of the problem didn't seem to be schematic so much as it was/is Horford looking old for long stretches. It's one thing when Philadelphia's bench role players on minimum contracts turn in inconsistent efforts. It's another thing for Horford to struggle when he's in a suboptimal situation with Joel Embiid alongside him. But when he stinks up the joint in a role that he should be thriving in, that should set off alarm bells for everybody.

To his credit, Horford was a huge part of their closing effort against Brooklyn, deterring Irving and Brooklyn's guards around the rim when it mattered most. But the minutes that preceded it did not exactly inspire a lot of confidence about where he's at right now. He was getting bodied for rebounds by Joe Harris!

Here's an even worse observation: Horford is playing some dumb basketball at times, showing the sort of awareness you'd expect out of a rookie, not a seasoned vet whose intelligence has been lauded as a strength. The Sixers rolled the ball up the floor with less than a minute left in the second quarter in an effort to take advantage of a two-for-one opportunity, and Simmons hit Horford with a pass with the expectation he was going to let it fly. Horford didn't get the memo, and Simmons gave him an earful about it afterward, confused as to why he didn't understand the time and situation.

The Sixers need good Horford for longer stretches than they're getting him for, and it's really that simple.

• There was a little bit of angst when news came down about Norvel Pelle on Wednesday afternoon, with the assumption being that the Sixers had made a mistake not converting his deal right this instant. That ignores the salary implications of doing so, but if you wanted a snapshot of why it's not pressing to get him on an NBA contract right this instant, I present to you his first-half performance against the Brooklyn Nets.

Pelle looked lost on both ends for stretches of Wednesday's game, getting spun around on defense and not understanding where he was supposed to be for Philadelphia's called plays. Richardson and Simmons attempted to run a pick-and-roll to end the first quarter, and even with Simmons barking at him to get the hell out of the way, it took Pelle until late in the clock to finally figure out what his teammate was asking for.

Give him this — Pelle shrugged off that effort and was much better in the second half, contributing to the run that pushed Philly in front early in the fourth quarter.

• That was without question the deadest I have heard the crowd at a Sixers game all season. The Nets with a limited Kyrie Irving are not exactly a glamour opponent, but I do wonder if Philly's struggles this season have finally started to bleed into how the crowd receives this group. If that's the case, I can't say I would blame the locals — they make it feel like a chore to watch basketball at times, and without the franchise player available, they're kind of a one-note team.