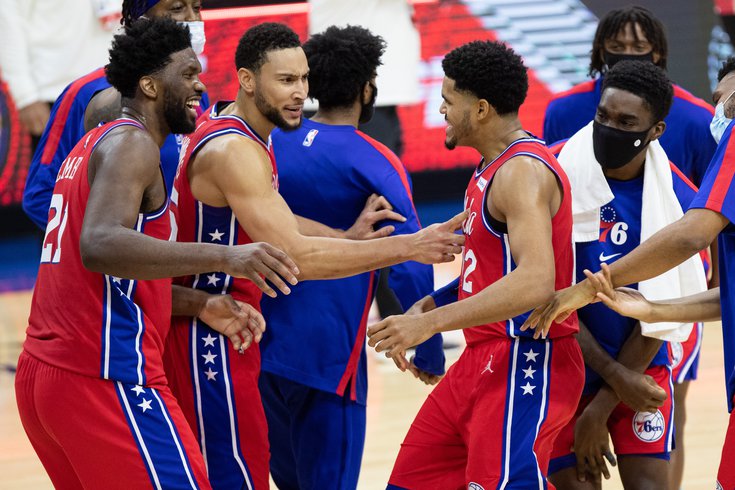 Tobias Harris was the hero for the Sixers Wednesday night.

The Sixers nearly melted down in crunch time against the Lakers Wednesday night, but a clutch game-winner from Tobias Harris in the waning seconds earned them a 107-106 victory over the reigning champs.

• Tobias Harris deserves a lot of credit for his commitment on the defensive end this season, a development that has allowed him to continue contributing even when his shot goes cold or he's uninvolved in the offense for a bit. He was huge on both ends in a third quarter that could have gone sideways for Philly in a hurry, holding down the fort against Anthony Davis as Embiid tried to get his legs back under him.

Defending Davis on an island is hard for anybody, let alone a guy who is giving up considerable height/length as Harris is in that matchup. But Harris found the sweet spot, getting up into his chest and flashing some light feet to stay in front of him and force tough angle shots from L.A.'s All-NBA big.

His offense, of course, was even more important than his defensive contributions, with Harris having to buoy the team once Simmons started to fade and Embiid slowed down. The Sixers could hardly get into their sets for much of the game, so Harris' ability to create for himself and knock down the few open looks that came his way was pivotal in keeping the Sixers out in front.

And boy, did they ever need it at the tail end of their crunch-time collapse, with a feel-good win turning into an almost disaster in the end. Harris was the guy who got the call with the game on the line, and he delivered a monster make from midrange to send the Sixers home victorious.

76ers hand the Lakers their first road loss of the season. pic.twitter.com/73cZKEnS2Z

Harris was right on time whenever the Sixers needed him on Wednesday night, and that has been the story of his season to date.

• It is worth considering that this is the same Sixers team that got completely outplayed by the Detroit Pistons on Monday night. The only difference (aside from a bit of extra motivation) was having Joel Embiid available. Turns out that's a pretty significant piece of the puzzle for Philadelphia.

Apparently ready to shake off a history of bad games against Marc Gasol, Embiid got to work early, avoiding the plodding possessions that get him into trouble when he's up against Gasol. With decisive moves that mostly brought him toward the baseline, Embiid got it going, and by playing with speed he forced the Lakers to pick up some cheap fouls defending him in the first quarter.

It got a lot tougher for Embiid from there, with L.A. mixing up coverages and swarming him on the block at every opportunity. There were some bad turnovers and bouts of tunnel vision, and worst of all, Embiid took a nasty spill while being fouled in the third quarter, pounding the floor in frustration and wincing as he walked around the court in the minutes following that play.

Even with his offense dipping, Embiid was as important as ever on the back end, forcing the Lakers to take some crazy-looking shots in the paint when they were able to beat Philly's perimeter defenders. And he had just enough left in the tank to pull off a highlight move over Davis in crunch time:

Joel Embiid converts an awesome reverse layup for the and-1 with a little celebration at the end pic.twitter.com/E2VHukNnZh

Not a bad season he's having.

• Whether it was a matchup with his old team or just a night where he had his legs underneath him, Danny Green was locked in against the Lakers, primarily on the defensive end of the floor. He had to juggle a wide variety of assignments, bouncing from guards like Alex Caruso to big men like Montrezl Harrell, and he handled that wonderfully, poking away loose balls from big men and coming up with blocked shots and great contests against the smaller guys.

Green has had a few of these sort of performances this year, and the trick is going to be stringing them together with any sort of regularity. A tough ask for a vet who can't turn it up as much or as easily as he could in the past, but it would certainly be nice.

(Just don't ask him to defend guards like Dennis Schroder, Doc. Not a good assignment for him.)

• Figuring out the defensive matchups was a bit of a struggle for Philly in the early going. Doc Rivers appeared to want to just match positions and go Embiid/Gasol, Harris/Davis, and Simmons/LeBron. That got blown up pretty quickly, but not for the reason you might expect, with LeBron absolutely killing the Sixers through a series of backdoor cuts in the opening quarter.

It got worse from there thanks to a lineup quirk that has doomed Philly all season. The Sixers got almost nothing going on offense with the Howard-Simmons-Thybulle triumvirate on the floor together, and as the Lakers downsized to try to spread the Sixers out, the Sixers went along with it, sticking Simmons at the five and trying to make it work.

Even though the Sixers spent long stretches of the game leading, Rivers felt like he was chasing the game most of the night from a strategic perspective, reacting to what L.A. did rather than try to dictate the game on their end. That's understandable in a game against the reigning champs with two elite players to move around as chess pieces, but worth noting.

(A more positive note here — I thought Rivers made the right call seeing what Tyrese Maxey could give them in the second half after a tough start for Furkan Korkmaz. The book on Rivers is that he is reluctant to make meaningful adjustments, but he has proven a little more flexible in his gameplan than I thought he'd be this year.)

• One of those nights for Ben Simmons that is a bit difficult to categorize. On one hand, he came out of the gates firing, forcing James to match his pace with a series of aggressive moves to the rim. On the other hand, there were a lot of meandering moments in transition that may not show up in the box score but undercut strong opportunities. Three separate times, Simmons had one-on-one matchups he could have attacked and he never even looked at the rim, resetting possessions that should have been fouls drawn or layup attempts.

The story was the same on defense. Simmons had an absolutely miserable time with LeBron James for most of Wednesday night. Some of it came down to LeBron being the all-time great that he is, but there were a lot of uncharacteristic errors on Simmons' side of the battle that made life too easy for a guy who doesn't need a leg up. But when he was matched up with Anthony Davis for long stretches of crunch time, Simmons simply did not allow him to get free for a lot of the final 12 minutes, forcing the Lakers to try to win through LeBron and the rest of the supporting cast.

(Unfortunately, LeBron and the rest of the cast did a pretty damn good job of bringing the Lakers back into it. So it goes.)

The Sixers had a bit of a meltdown in crunch time on Wednesday, and while I think Embiid has to wear his fair share of that struggle, I think this game shows you exactly why so many people (myself included) are skeptical of this team being led by Simmons as a perimeter initiator when it matters.

Those plays in transition that he didn't look at the rim for in the first half turned into crunch-time possessions where the Lakers knew he didn't want to try to score, forcing guys like Danny Green and Seth Curry to force up tough shots they never should have had to attempt.

• If Dwight Howard isn't going to be useful in this matchup, the Sixers almost certainly have to start developing or searching for an alternative they can use for when that's the case. I've been a broken record on this point, but it doesn't make it any less essential to figure out.

I am not a believer in Simmons playing small-ball five because I don't think he adapts well to the responsibility of being the last line of defense, nor do the Sixers have enough perimeter defenders to play alongside him to ease his burden on the back end. But if that's where Rivers' head goes when a Howard-anchored lineup falls apart against a good team, they're going to have to drill it so that Simmons and everyone around him is prepared to play it when it counts.

• Not the best night Seth Curry has had since arriving in Philly. I'm not sure if the ankle issue the Sixers keep listing him on the injury report for is more serious than they're letting on, but he was out of sorts throughout the night. He's got defensive issues even on a good day so we don't need to dwell on this, but he compounded some shoddy possessions by taking bad fouls in the first half. A night he'll likely forget quickly.

• I get that they have a guy who has made Embiid's life miserable, so it's not like they're avoiding the matchup for no reason, but Anthony Davis not taking the Embiid challenge on defense is pretty funny. This is more about what I want to watch than it is about making the right strategic decision, but come on!  Give the people what they want to see, and show me the defensive chops that made you DPOY.

Embiid has no qualms about taking the assignment as much as possible, and he seemed to want to remind Davis of that any chance he got throughout the game. It's one of the things I respect most about Embiid. He may fall on his own sword sometimes, but he never backs down from an opportunity to go toe-to-toe with anybody.

• Embiid getting the same penalty for making contact with Anthony Davis as the Lakers did for what LeBron James did to Embiid in the third quarter is pretty ridiculous. If grazing a guy's face with your elbow draws the same penalty as a mid-air shove, I'm not sure what the rules are meant to prevent in the first place. This is not a basketball play:

Joel Embiid was visibly in pain and went down hard on his back after being fouled.

LeBron was called for a flagrant 1 and Embiid stayed in the game. pic.twitter.com/LSOVsgVy5f

One play is much more dangerous than the other. If a role player pulled something like this, they would have been sent to the locker room for the night and would have rightfully deserved a Flagrant 2.