Drexel alum and mom were on board doomed French Alps flight 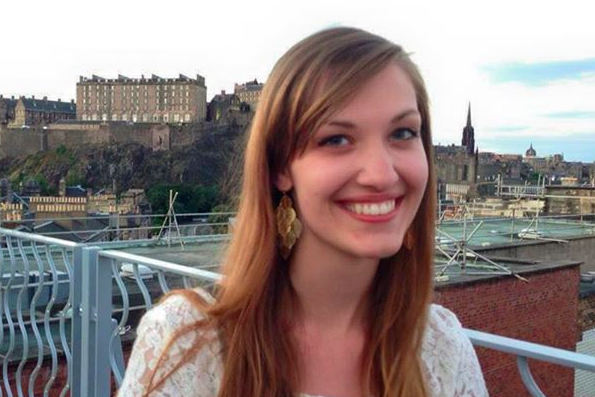 Drexel alumni Emily Selke (pictured above) and her mother were abroad the plane from Barcelona to Düsseldorf that crashed yesterday.

A Drexel alumnus and her mother were on board the German Airbus flight that plowed into an Alpine mountainside, killing all 150 passengers.
According to school officials and Drexel's Gamma Sigma Zeta Chapter's Facebook page, alumnus Emily Selke and her mother were aboard the plane from Barcelona to Düsseldorf that crashed Wednesday.

"Zeta chapter is mourning the loss of our beautiful alumni, Emily Selke," the sorority posted. "Emily served as our membership VP while in Zeta and she was an integral part of our growing chapter. She embodied the spirit of Gamma Sigma Sigma. As a person and friend, Emily always put others before herself and cared deeply for all those in her life. Emily will be greatly missed by her fellow sisters of Zeta. Please keep Emily, her mother and their family in your thoughts and prayers during this heartbreaking time."

RELATED STORY: Germanwings plane crashes in France, 150 dead
NBC News identified the mother as Yvonne Selke, of Nokesville, Virginia and published a statement from the family.

"Our entire family is deeply saddened by the losses of Yvonne and Emily Selke," the family said in a statement. "Two wonderful, caring, amazing people who meant so much to so many. At this difficult time we respectfully ask for privacy and your prayers."

The women were two of three Americans on board the plane, which carried 150 passengers and crew members in all, including 16 teenagers returning from a school trip to Spain, the U.S. State Department said on Wednesday.

Spokeswoman Jen Psaki said the third U.S. citizen is not being named at this time.

There were no survivors in the crash.
Selke was a 2013 graduate of Drexel's Westphal College, according to school officials.

"Drexel is deeply saddened to hear about the tragic loss of alumna Emily Selke and her mother," a spokesman said. "Emily graduated with honors from Drexel in 2013 and was a music industry major in Drexel’s Antoinette Westphal College of Media Arts & Design. Our thoughts and prayers are with her family and friends."

According to the Associated Press, Yvonne Selke was employee of Booz Allen Hamilton Inc. in Washington, D.C. and worked as a U.S. government contractor with the National Geospatial-Intelligence Agency, the Pentagon's satellite mapping office.

French investigators are now searching for the reason for the crash. Helicopters flew over the site where the A320 operated by Lufthansa's Germanwings budget airline disintegrated after it went down in a remote area of ravines en route to Duesseldorf from Barcelona. Police investigators made their way across the mountains on foot.

No distress call was received before the plane crashed on Tuesday, but French authorities said one of the two "black box" flight recorders, the cockpit voice recorder, has been recovered from the site 6,000 feet above sea level.

"The black box has been damaged. We will have to put it back together in the next few hours to be able to get to the bottom of this tragedy," French Interior Minister Bernard Cazeneuve told RTL radio, adding the box was still viable.

Cazeneuve said the fact debris was scattered over a small area of about one and a half hectares showed the plane likely did not explode in the air, meaning a terrorist attack was not the most likely scenario.

In Washington, the White House said the crash did not appear to have been caused by a terrorist attack. Lufthansa said it was working on the assumption that the tragedy had been an accident, and any other theory would be speculation.

Germanwings was canceling some flights on Wednesday as some crew members had refused to fly. "There are crew members who do not want to fly in the current situation, which we understand," a spokeswoman for Germanwings said.

"Seeing the site of the accident was harrowing," Lufthansa chief executive Carsten Spohr said on Twitter. "We will enable the relatives to grieve on site as soon as possible."

Germanwings believed 67 Germans were on the flight and Spain said 45 passengers had Spanish names. One Belgian was aboard,  Australia said two of it nationals had died and Britain said it was likely some Britons were on the plane.

Also among the victims were 16 teenagers and two teachers from the Joseph-Koenig-Gymnasium high school in the town of Haltern am See in northwest Germany. They were on their way home after a week-long Spanish exchange program near Barcelona.

The school held a day of mourning on Wednesday. Students arrived by bicycle and on foot like any normal day, but stopped by candles and flowers placed outside the school, where a hand-painted sign said: "Yesterday we were many, today we are alone."

Aerial photographs showed smoldering wreckage and a piece of the fuselage with six windows strewn across the mountainside.

"We saw an aircraft that had literally been ripped apart, the bodies are in a state of destruction, there is not one intact piece of wing or fuselage," Brice Robin, prosecutor for the city of Marseille, told Reuters after flying over the site.

Experts said that while the Airbus had descended rapidly, it did not seem to have simply fallen out of the sky.

A Lufthansa flight from Bilbao to Munich on Nov. 5 lost altitude after sensors iced over and the onboard computer, fearing the plane was about to stall, put the nose down. As a result, the European Aviation Safety Agency ordered a change in procedure for all A320 jets.

Asked whether something similar could have occurred on Tuesday, Germanwings Managing Director Thomas Winkelmann said, "At this time this evening, we are ruling out a possible cause in this area."

The aircraft came down in a region known for skiing, hiking and rafting, but which is difficult for rescue services to reach. The base of operations for the recovery effort was set up in a gymnasium in the village of Seyne-les-Alpes.

It was the first disaster involving a large passenger jet in France since a Concorde crashed outside Paris nearly 15 years ago.

The A320 is one of the world’s most used passenger jets and has a good safety record. According to data from the Aviation Safety Network, Tuesday's crash was the third most deadly involving the model. In 2007 a TAM Linhas Aereas A320 went off a runway in Brazil, killing 187 people, and 162 people died when an Indonesia AirAsia jet went down in the Java Sea in December.

The Germanwings plane was 24 years old, with engines made by CFM International, a joint venture between General Electric and France's Safran.