Why was Jalen Hurts scratched before Eagles second preseason game? 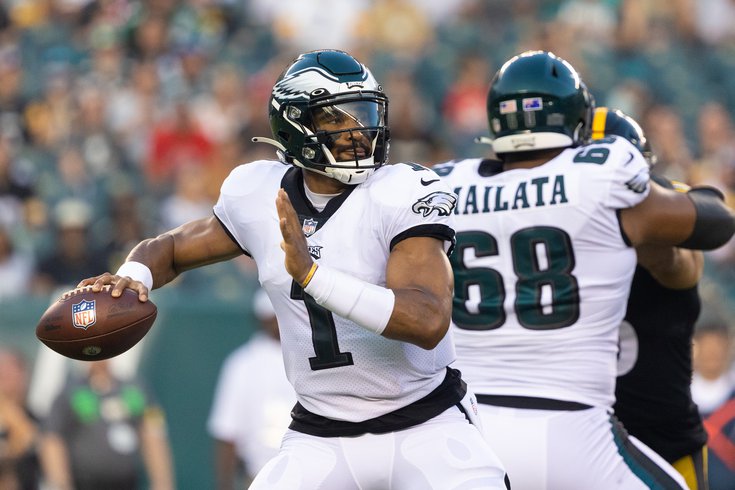 UPDATE [10:40 p.m.] — Jalen Hurts apparently was sick, and the Eagles rightfully held him out Thursday night due to some stomach pain, Nick Sirianni confirmed.

Nick Sirianni says Jalen Hurts is doing ok now, but he went to the hospital to get evaluated for his stomach.

The head coach went on to imply that Hurts should be fine to return to the field for the two inter-squad practices against the Jets next week.

If you're reading this you are probably already one of the many confused Eagles fans (and football fans in general) who tuned into Thursday night's second preseason game expecting to see Jalen Hurts start and get some reps with first round pick DeVonta Smith back on the field.

But after what appeared to be a lively and impressive warmup session, Hurts did not take the first snap for the Eagles when they took the field against New England. It was backup Joe Flacco, who would go on to fumble on a snap over his head that led to a Patriots touchdown.

Participation Update: QB Jalen Hurts will not be playing tonight due to an illness.

This being Philadelphia, the conspiracies started flying immediately. Did a late COVID test come back positive? Did head coach Nick Sirianni have second thoughts about letting his presumptive starter take unnecessary hits after playing so well in joint practices all week? Did Howie Roseman strike a deal to trade the second year pro seconds before kickoff Thursday (Deshaun Watson perhaps)?

The real answer will trickle out soon enough, and the simple explanation is usually the correct one. He probably didn't feel well and the Eagles decided to be careful rather than risk anything.

Many reporters and coaches say the joint practice sessions are more valuable than the preseason games themselves, so his sitting out makes perfect sense — but why the 11th hour illness designation?

Still, it's very peculiar and will be the talk of the city until details come out. And even then, conspiracies will still run rampant.

While the second half of Thursday's game, which will feature mostly second and third stringers may be pretty boring, being an Eagles fan never is.