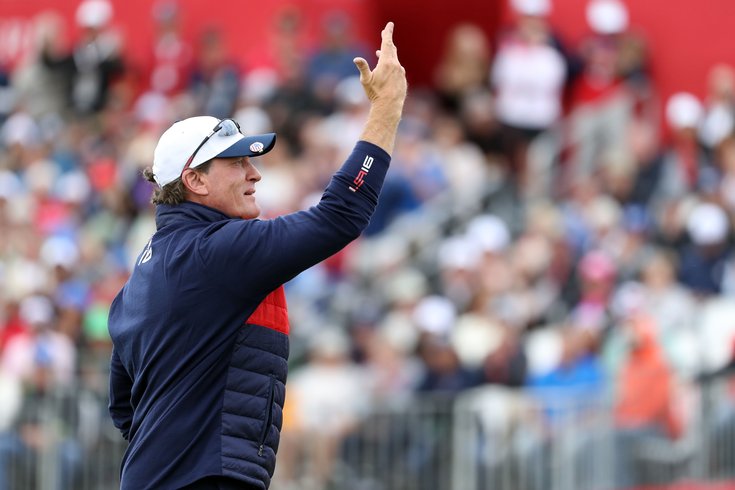 President Donald Trump complimented Jeremy Roenick's skills as golfer during a campaign rally in Phoenix on Wednesday, Feb. 19, 2020. Roenick, who was fired by NBC Sports for sexual remarks he made about his co-hosts, is seen here in September 2016, at a celebrity tournament during a practice for the 41st Ryder Cup in Minnesota.

Roenick, also a former Philadelphia Flyer, normally would have been working Wednesday nights during NBC Sports' hockey broadcasts. He was officially fired by the network last week over sexually inappropriate comments he made in December during an appearance on the Barstool Sports podcast "Spittin' Chiclets."

Trump talked about Roenick during the rally and spoke of a golfing friendship between them. Via USA Today:

He's an Arizona hockey great, a friend of mine," Trump said. "He's a great golfer, too. He's a tough golfer. He's tough to beat. He's tough as hell. And if you beat him in golf, he'll beat you physically. He doesn't care. ... He was the toughest hockey player. He was one of those guys who could beat you one way, and if he couldn't, he'd just beat them up.

Trump later thanked Roenick, who appears to have been at the rally, and called him a "winner."

President Trump pointing at former Arizona Coyotes player Jeremy Roenick who is in the crowd tonight at his rally. Crowd outside gave a loud cheer #12News pic.twitter.com/hQsxNdHReY

Roenick was initially suspended by NBC Sports on Dec. 24 in response to remarks he made about co-hosts Kathryn Tappen and Patrick Sharp. He issued a public apology in January, but later expressed anger and disappointment when the network cut him loose earlier this month.

"I'm very disappointed and angry today that I will not be returning to NBC," Roenick said. "And though disappointed, I am also grateful that I've had the opportunity to share my love, my passion, my knowledge of the game with millions people, millions of fans, and for that, I thank you. Even though I am leaving NBC I will not be gone for long."

On the "Spittin' Chiclets" podcast, Roenick discussed a trip to Portugal that he took with his wife and Tappen and being approached poolside by a woman who asked about the nature of the trio's relationship.

"I play it off like, you know, we're going to bed together every night, the three of us," Roenick said at the time. "Now, if it really came to fruition that would really be good, but it's never going to happen."

In the same interview Roenick also praised Tappen as "one of the most professional sports personalities that I know" and said she "wants people to respect her for her knowledge of sports, not just 'cause she's a pretty face."

About Sharp, Roenick called him "beautiful," adding that he would have to think twice if he had an opportunity to sleep with him.