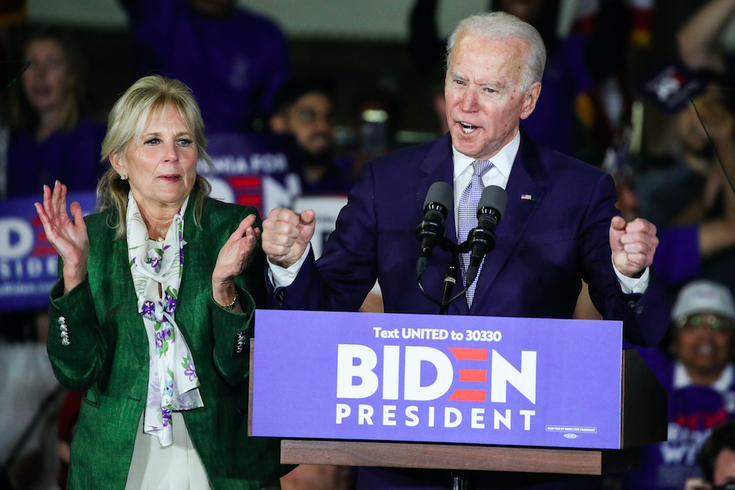 Jill Biden fended off protesters on Super Tuesday as her husband, Joe Biden, celebrated his victories at a rally in Los Angeles on March 3, 2020. Biden surged in momentum in the Democratic presidential race, gaining ground on Vermont Sen. Bernie Sanders.

But it was Biden's wife, Jill, who captivated the nation as her husband's campaign celebrated the results in Los Angeles.

As Biden delivered his victory speech, two different anti-dairy industry protesters charged the stage at different points. Jill Biden fended them both off with fearless gusto, again displaying the toughness she credits to her Philadelphia-area upbringing.

YO, Jill Biden is FEARLESS.

These two protesters rushed the stage, and Jill had her man's back.

Nice to see that.
You'll never see Melania do that. pic.twitter.com/wG0xHobFyk

The incident generated an a striking photograph of Biden in action as she thwarted the second protester.

Our philly girl kicking butt in high heels and all. Don’t mess with her #JillBiden pic.twitter.com/RVTpTmDRnL

Biden later confirmed she wasn't harmed, and tweeted about her husband's newfound "Joementum."

I broke a nail. #SuperTuesday

After months of tepid support and underwhelming debate performances, the former vice president's Super Tuesday breakout sent him temporarily to the top of the race. Vermont Sen. Bernie Sanders, who has been the party's frontrunner for weeks, is awaiting final results from his victory in the prize state of California, which could help him hold an edge over Biden in the delegate count.

In response to Tuesday's results, former New York Mayor Michael Bloomberg dropped out of the race and gave his endorsement to Biden on Wednesday morning. Massachusetts Sen. Elizabeth Warren, who trailed her counterparts by a wide margin, has left the future of her campaign in significant doubt.

We break down all of the Super Tuesday results in so far👉https://t.co/7rRbRgSaSo pic.twitter.com/ckiaUr0ojd

Super Tuesday exposed a collection of demographic factors that will influence the next leg of the Democratic race, from the force of late deciders to the gulf between voters who support Biden's moderate platform and Sanders' progressive revolution.

Another six states will hold primaries next Tuesday, further clarifying the path ahead toward a Democratic challenge to President Donald Trump in November.