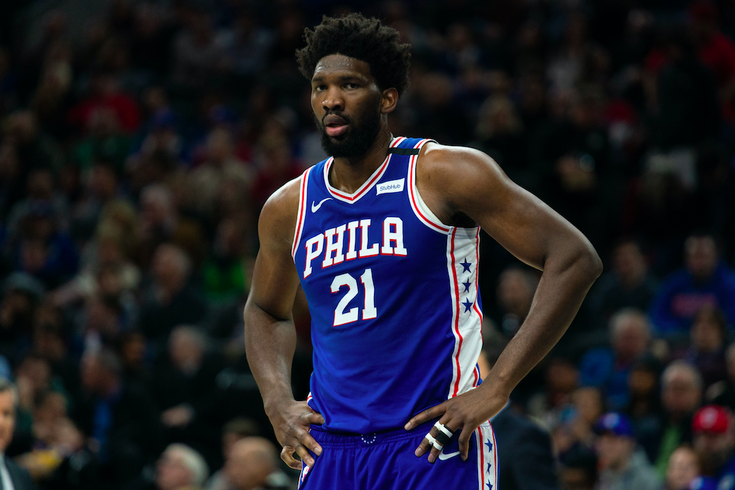 Philadelphia 76ers center Joel Embiid opened up in a new piece for The Players' Tribune, where he addressed everything from the pain of losing his brother to his goals as a developing basketball player.

The Philadelphia 76ers once again find themselves without Joel Embiid in the starting lineup, this time due to a torn ligament in his finger that has him on the mend.

The 25-year-old big man has had a fitful season — yes, because of the latest injury, but also because of mental growing pains that have been evident ever since his scuffle with the Timberwolves' Karl-Anthony Towns. He wants to be more mature as a person and basketball player.

Writing Wednesday for The Players' Tribune, Embiid revealed a new side of himself along with some fresh insight into the mindset he's applying to his game. He's not particularly concerned about the latest injury.

"Listen, I know it sucks that I’m out. Nobody feels worse than me about it," Embiid wrote. "But it’s just a finger. It’s nothing. Compared to what I’ve been through, it’s nothing, man."

To put a finger on that, what Embiid has been through in his life nearly convinced him never to bother with his NBA career.

Embiid's younger brother, Arthur, died in a car accident in 2014 when a truck driver plowed into a school yard in Cameroon. When Embiid learned of his brother's death, Sixers head coach Brett Brown spent the night comforting him at his apartment. He nearly quit to return home and stay with his family.

In hindsight, Embiid realizes that pursuing basketball usually meant he was losing time he could have spent with Arthur. Embiid vividly recalls skipping his first-ever basketball camp in Cameroon to lounge around with his little brother:

I didn’t even show up on the first day of camp. I was way too scared. I actually skipped it so I could sit at home and play FIFA with Arthur...

The next day, after my dad found out what happened, he made sure I got my ass to the camp — and then basically my whole life changed.

But for that one day me and Arthur just had fun. And you know what? I could probably remember that afternoon better than I can remember a lot of the biggest basketball moments in my life.

NBA commentary around the Sixers this season has been largely critical. With another starting five reconfigured around Embiid and Ben Simmons, the Sixers have alternated between a team capable of thrashing the top-seeded Milwaukee Bucks and a group that can't close games, can't win on the road and can't seem to sustain the momentum necessary to keep pace with high expectations, whether it's their own or others'.

Under the circumstances, Embiid has become a target of mounting criticism — often from former players Shaquille O'Neil and Charles Barkley — who would prefer to see him commit fully to the role of the big man instead of launching threes and coughing up the ball on sloppy possessions outside the paint.

"Above everything, I’m a student of the game," Embiid said. "That’s the only way I was able to pick it up in such a short amount of time. You can’t just be a Big on the block anymore. You need to be a basketball player."

The outcome of the 2019-20 season will likely be seen as a turning point for Embiid, who has heard the questions about his conditioning and injuries for years now. He would like to put his goofball days on hold and help carry Philadelphia to an NBA championship.

"I’m done with the trash talking and the memes and all that. Once I’m holding that trophy in my hands, maybe I’ll be back to my charming self," Embiid wrote. "For now, I got one thing on my mind. I’m not trying to win a debate. I’m trying to win a f***** title."