Joel Embiid takes on the spicy Paqui 'One Chip Challenge', immediately regrets it

The Sixers' big man, always the king of social media, can't keep his cool in front of the camera 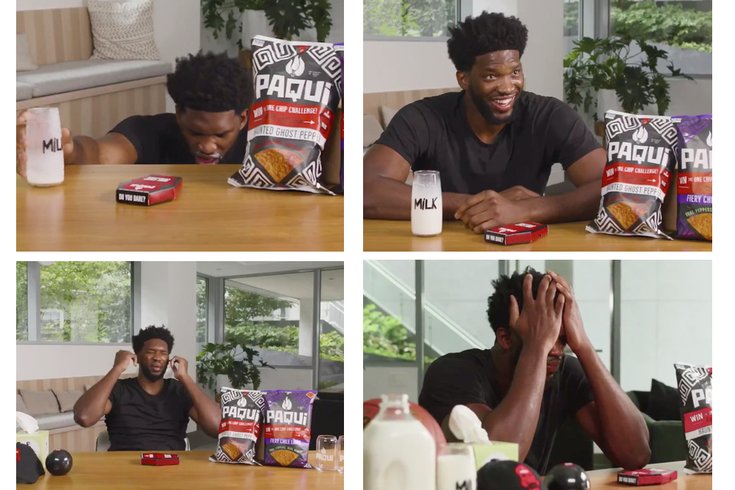 Joel Embiid, going through the four stages of pepper-fueled grief. Alternatively, Sixers fans when the team chokes away an early double-digit lead.

Joel Embiid, the Sixers' transcendent superstar and multi-purpose goofball, posted a video to Twitter on Friday afternoon. The video features Embiid eating one of those spicy Paqui chips from the "eat this very spicy chip challenge" of (checks notes) 2016?

Why Embiid, usually a cutting-edge social media user, has partnered with Paqui for a content idea that predates the current President of the United States is beyond me.

However, because it's Embiid, the video is still fantastic. You're gonna want to watch it below, probably more than once:

They said the @paquichips #OneChipChallenge was hot, but for me, it was no sweat. Okay, maybe just a little sweat… Watch to find out who I challenge to take on the world’s hottest chip. 🔥☠️🔥 #ad pic.twitter.com/lgPaW18WUr

There are many highlights in this 60-second video:

• "In Africa we don't feel heat"• Embiid saying he has no regrets, followed by a quick cut of him nearly vomiting

• His strategy of plugging his ears (?) to assuage the chip's spice

• The smile, around 0:37, when he remembers he's been filmed making a terrible mistake

• Hitting the floor to save himself

All in all, it's a nice piece of offseason content from the Content King himself. The Sixers start their regular season Oct. 23 with a home game against the Celtics.