By Associated Press
NFL Combine
from 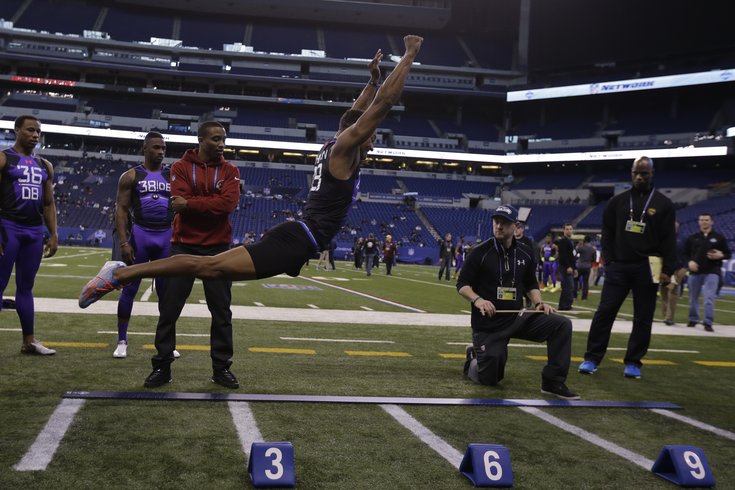 Connecticut defensive back Byron Jones runs a drill at the NFL Scouting Combine Monday in Indianapolis.

INDIANAPOLIS — Byron Jones might have made one giant leap up the NFL draft boards Monday. Actually, make it two big leaps.

On the last day of workouts at the NFL's annual scouting combine, the Connecticut cornerback soared 12 feet, 3 inches in the broad jump. That was 15 inches farther than the second-best defensive back and 8 inches longer than the best listed in the NFL scouting combine database.

Gil Brandt, a longtime Dallas Cowboys executive who still works with the combine, believes it a record. He couldn't remember anyone topping 12 feet.

Nobody could stay with Jones in the vertical jump, either. He went 44.5 inches, going 3 inches higher than the next closest finisher.

Everyone seemed surprised, except Jones.

"My personal (broad jump) record was 11-7. That's what I was doing at the training facility and I obviously broke that," he said by phone. "It feels good to put a PR (personal record) up."

PhillyVoice's Jimmy Kempski profiled Jones in his Corners that could be of interest to the Eagles post.

How much could Jones' performance help his stock? That will be determined leading to the draft, which begins April 30.

He started combine week barely cracking some of the top 10 lists at his position. But on the last of four workout days in Indianapolis, Jones made a splashy exit — and jump-started a national buzz on social media.

"I feel it may have boosted it up a little bit, but at the end of the day the film is what is most important," Jones said. "You've got to have good film, so I'm relying on that."

NFL decision-makers collect a wealth of information before making draft decisions, and on Monday there were still some numbers to fill in for Jones.

The NFL's official tracker did not list Jones with a time in the 40-yard dash or the number of bench press reps he did at 225 pounds — two stats that usually have much more to do with draft stock than numbers in the vertical or broad jumps.

But, for one day, he was a bigger star than some of his better-known colleagues.

Michigan State's Trae Waynes (4.31 seconds) and Darby (4.38) turned in the fastest 40 times among cornerbacks. Mississippi State's Justin Cox was the fastest safety in the group at 4.36. Southern California cornerback Josh Shaw was one of four players clocked at 4.4, and cornerback Marcus Peters ran a 4.53.

Peters was booted off Washington's roster in November.

And during a week in which when Jameis Winston impressed in the throwing drills, Marcus Mariota ran a 4.52 in the 40 and Melvin Gordon matched Marshawn Lynch's time in the 40, it may have been Jones who helped himself the most.

"I feel like I did well," he said. "Of course, I hit my marks in the vertical jump and the broad jump. I've got to run a fast 40 and continue to look smooth in the background."