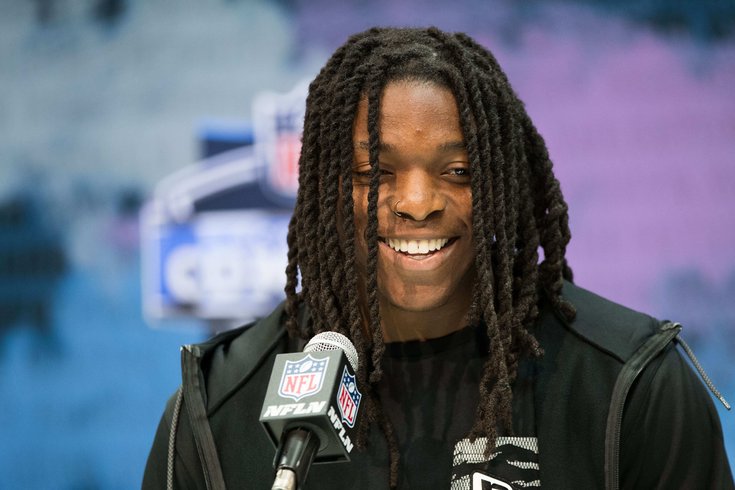 Colorado wide receiver Laviska Shenault Jr. speaks to the media during the 2020 NFL Combine at the Indianapolis Convention Center.

In the days and weeks since Kobe Bryant, his daughter Gianna and seven others were tragically killed in a helicopter crash in Souther California, the stories about the NBA legend have come pouring out one after another.

This continued even as recently as this week at Bryant's memorial service at the Staples Center on Monday, with stories like how he once bought the blue dress and the actual notebook from "The Notebook" for his wife, or how he was once late for picking up his daughter from school and then showed up an hour and a half early the next day just so he could be first in line.

Another common theme among the Kobe stories that have been remembered in recent weeks are the ones about how he passionately helped younger athletes grow and succeed. And sometimes, it was something as simple as sharing a moment with a young player and giving him a memory to last a lifetime, memories made even more impactful by his untimely passing.

As it turns out, the Lower Merion grad and life long Eagles fan also did a bit of unofficial recruiting for the Eagles less than a month before he died.

Colorado wide receiver Laviska Shenault Jr., who has been mentioned as a possible first-round target for the Eagles in this spring's NFL Draft, went to a Lakers-Mavericks game on December 29 with tickets he scored from his soon-to-be agents at Clutch Sports, and when a few clients didn't show up, Shenault was upgraded. To courtside seats. At Staples Center. Right next to Kobe and Gianna Bryant.

And Kobe not only took that opportunity to chat up the talented young wide out, but to also point out that there's a certain football team in Philadelphia in need of a receiver.

Here's more from TheDNVR.com on what happened that night between Bryant and Shenault, a story Shanault shared this week at the NFL Scouting Combine in Indianapolis:

“He was great at just explaining what was going on,” Shenault explained of the interactions between the two. “He was a great family man, of course, everyone sees that. They were just talking the whole time. He was trying to help her understand things and they were just laughing and having a good time.” ...

And on this night, Shenault got his own Kobe memory to cherish for a lifetime.

“I actually haven’t been able to talk to anybody about this, but one of the talks we had—he had an Eagles hat on, and one of the things he said was, ‘Man, Philly sure needs a receiver,'” Laviska explained, raising his eyebrows and smirking in a way that helped you imagine the exact way Kobe delivered the line.

“That was so exciting for him to say that,” he added. “I responded with, ‘Aye, I can get the job done for you.’ That was a special moment.”

Interestingly enough, on Monday night in Indianapolis, an NFL source told DNVR that the Eagles have real interest in the Colorado product. But unfortunately, even if fate would have it, we’ll never get to see Kobe Bryant in a jersey that reads “Shenault Jr.” on the back.  [thednvr.com]

That's right, Kobe was recruiting for the Eagles while taking in a Lakers game with his daughter. What a story. And what a memory for Shanault, whether the Eagles draft him or not.