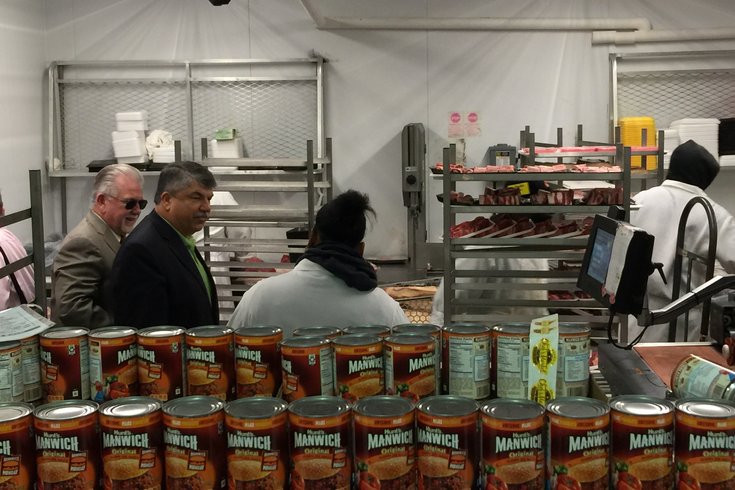 Richard Trumka, president of the national AFL-CIO, visited Brown's ShopRite in Northwest Philadelphia to talk to workers on Tuesday, October 18, 2016, about the upcoming presidential election. Here, he's seen in the store's butcher area.

The year was 2005, and Pennsylvania opened its doors to slot-license applications in Philadelphia.

One of the sites in play was the former Budd Company plant on a parcel of land situated between Nicetown, East Falls and Ridge-Allegheny-Hunting Park, and none other than Donald Trump’s casino company started leasing land to make it happen.

Those plans were met by staunch neighborhood opposition, and never came to fruition. In a casino’s place now sits Bakers Centre shopping center which features a Brown’s ShopRite location as its anchor store.

On Tuesday, that store entered the political sphere as AFL-CIO President Richard Trumka, the union’s local president Patrick Eiding and UFCW 1776 President Wendell Young IV visited the supermarket “to talk with workers about the stakes in the election.”

“There’s a lot of working people who are frustrated and angry because, for three or four decades, the rules have been rigged against them.” –Richard Trumka, president, AFL-CIO

Another way to put that quote is the contingent of union leaders was there to encourage members to vote for Trump’s opponent, Hillary Clinton, on Nov. 8. Suffice it to say, the site remains in the anti-Trump camp a decade after his casino plans were rebuffed.

There, they met with ShopRite employees like Victoria, who’s hosting a debate party on Wednesday night. They also spoke with Barbara Savior, a 13th Ward committeeperson who was identified as among the more politically minded employees.

“This election is important, and it’s scary. Some people think it’s a joke, but it isn’t,” she said before asking whether anybody had absentee ballots for her to provide residents in her ward. “I’m really afraid it could rain, because a low-turnout would be really bad.”

It’d be bad for Clinton, she meant. That’s the candidate for whom the union leaders, and supermarket chain owner Jeff Brown, urged people to vote during the visit with words and handouts explaining why Clinton and U.S. Senate candidate Katie McGinty have labor’s back, while Trump and incumbent U.S. Sen. Pat Toomey do not.

After touring the store – which is held up as an example of bringing sustenance to a “food desert” – Brown led the contingent past the employee’s break room and into a community room where they talked about what brought them to Bakers Centre on Tuesday.

“Trump was here gobbling up all the land and he wanted to put a casino here, but the people were outraged,” Brown offered by way of site background. “They needed a supermarket, not a casino. There were pickets. People were angry. And that’s when a community group called me in, asking if there’s anyway to get one of my supermarkets here instead of a casino. That couldn’t be more appropriate considering this election.”

He spoke about Young bringing then-candidate Barack Obama to one of his locations in East Norriton. That led advisors to call Brown to discuss the wheat market – as bread prices were high – and the “food desert” situation.

That’s how he ended up having a role in the First Lady’s “Let’s Move Program” and a seat at the 2010 State of the Union. It was presented as a delineation between Democrats and Republicans insofar as connecting with ground-level concerns.

“She wants to hear from people, wants to hear their ideas, and if you have a valid point of view, it really does move her on policy,” he said. “She’s not dogmatic, but she’s very, very practical and solution-oriented.

“Her word has always been gold with me. She has never once over-promised and under-delivered. She’d tell me stuff sometimes that I didn’t want to hear, but she was always honest and straight-up. When people attack her, that’s not the person I know.”

As an aside to Brown, Eiding noted Trump would "call you a fool for what you’re doing here because of his business antics.”

“He’s not a businessman. He’s a con man as far as I’m concerned,” Brown responded. 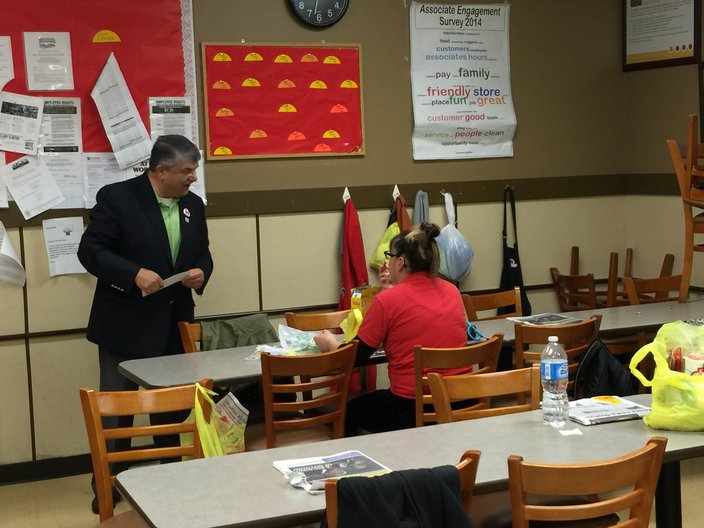 Richard Trumka, president of the national AFL-CIO, talks to an employee at Browns ShopRite on Fox Street in Northwest Philadelphia during his visit on Tuesday, October 18, 2016.

Before lunch was brought in for the union leaders to talk to employees about the election, Trumka set aside a few minutes for questions from PhillyVoice. They mostly centered on how the labor movement would fare under Trump or Clinton. His responses matched the political nature of the visit itself.

“I’m here because we’re very, very interested in reinvestment in urban America. We’re trying to figure out more and more ways to reinvest and attack poverty and the lack of opportunity in urban America,” he said, noting that the union initially had issues with Clinton’s stance on the Trans-Pacific Partnership. “This is a great example of doing that where everybody wins. The owners win, the workers win and, the community wins.”

He was asked to envision the impact of a potential Trump victory on his union, which represents more than 12 million active and retired members.

“I cannot imagine a Trump presidency because of the impact on the countr, and on communities,” he said. “I say three things about Trump. One: He’s unfit to be president. Two: He would make it harder for working people to make ends meet. And three: He would tear this country apart because his way of governing is dividing and creating fear among the people.”

He also branded Trump as a venom-spewing, anti-labor bully “who thinks our wages are too high and thinks outsourcing is a good thing, which he taught at the failed Trump University. … If he tried to bring his business model to the United States, he’d destroy the credibility that we have.”

Still, Trump has connected with some working-class voters, despite being at odds with the labor movement. Trumka was asked to reconcile that disparity. He said that’s “dropping like a rock” when you look at the polls, but understood how it came to be.

“There’s a lot of working people who are frustrated and angry because, for three or four decades, the rules have been rigged against them,” said Trumka, who was born in southwestern Pennsylvania and attended Villanova University. “They want us to believe that the economy is like the weather, that there’s nothing you can do about it. If it’s raining, you have to go outside and get wet. But the economy is a set of rules. Those rules are made by the men and women we elect, and those rules have been written by the elite and by Wall Street.

As for the next three weeks, Trumka’s union plans extensive get-out-the-vote work along with mailers and leaflets at work sites. They’ll focus primarily on Pennsylvania and six other states (Florida, Missouri, Nevada, North Carolina, Ohio and Wisconsin).

“We’re working them diligently,” he said.