What they're saying: Don't look now, but the Flyers are legit Stanley Cup contenders 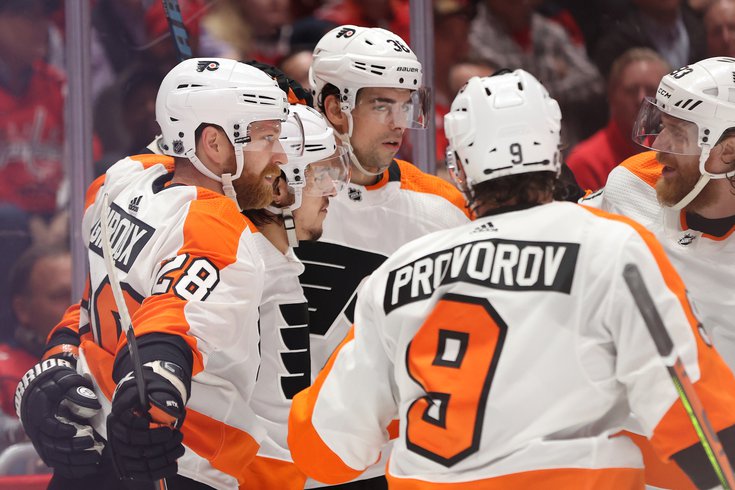 The last time we took a look at the Flyers' playoff odds, it was following Sunday's big win over the Rangers, when they jumped from somewhere around +2100 to +1600 following their sixth straight victory. We also talked about their chances according to the computer simulations and forecasts provided by MoneyPuck.com, where they actually had the Flyers listed as the favorite to win the Stanley Cup this year, bumping them from a 7.9% chance all the way up to a 12.7% chance, tops in the NHL.

Well, on Wednesday night, the Flyers secured an even bigger victory, their seventh straight, when they went into Washington and handled the division leading Capitals, 5-2, to move within one point of the top spot in the Metropolitan. And while we'll likely have to wait to see bookmakers adjust their odds on the Flyers, MoneyPuck updates in realtime. Here's a look at their latest, which actually saw the Flyers' chances dip slightly but still has them as the favorites, with Vegas not far behind.

But all of this begs the question, how much stock should be put in these predictive models? After all, the games are played on the ice and not in a computer simulation. But that doesn't mean they should be dismissed entirely — and it's always better to look at several of them instead of just one, as they each use varying metrics and weight certain stats differently.

In his weekly "16 Stats" column for The Athletic, Dom Luszczyszyn covered that extensively in his intro, and also compared MoneyPuck's model, to his own, specifically as it applies to the red-hot Flyers. Luszczyszyn said the biggest difference between the two is that his looks at everything at the player level, while MoneyPucks analyzes things at the team level.

"Essentially, one is looking at a team’s true talent level and one is looking at how well the team is playing right now," he wrote, adding that "it's in the differences where there are interesting questions to be asked."

So, what are the models saying, and how are they different? Here's more from Luszczyszyn:

That brings us to MoneyPuck’s current Stanley Cup favourite: the Philadelphia Flyers. It’s bold, but if you know how the model works, it makes sense. The model depends on recent trends, and few teams have been stronger than the Flyers of late. Since February, the team has a 56.6 percent expected goals rate at 5-on-5 (fourth), earns 7.7 expected goals per 60 on the power play (seventh) and allows just 5.3 expected goals against per 60 (second). It’s why the Flyers have a 12-3-0 record since and have surged up the Metropolitan standings, sitting just one point back of the division lead. This team looks legit with star-power and depth at every position.

My own model has noticed too, and while it can’t ignore how much stronger and deeper other contenders look to make the Flyers the Cup favorites, the team has certainly entered the conversation. Their Cup odds have spiked considerably over the last month as a result of their strong play, going from 1.2 percent on Feb. 1 to 4.4 percent today. Only Vegas has seen its underlying strength climb more in that time span than Philadelphia, a big reason the team’s Cup chances have increased so much. The Flyers have gone from likely being big underdogs as a wild card team, to being a formidable foe in the Metropolitan bracket, one that I can imagine few teams want to go up against.

While I don’t agree with MoneyPuck that they’re the favorite, I can see why the team deserves some hype going down the stretch. If they can keep up this play the Flyers have a very real shot and are looking like a legitimate dark horse team right now. They showed it last night in a big win over the division-leading Washington Capitals.  [theathletic.com]

OK, calling them the favorite might be a bit much at this point. But they are playing as well as any team in the NHL right now, and calling them a contender is hardly a stretch.

The Flyers will go for their eighth straight win on Thursday night when they host the Hurricanes. In the meantime, here's a look at what they're saying about the Orange and Black...

What changed for Flyers?

Now, to the actual stats from Luszczyszyn's post, which interestingly enough started off with a look at why the Flyers have been so good lately. Yes, he credits captain Claude Giroux and his linemates, but Alain Vigneault, who could be a frontrunner for Coach of the Year if his team keeps this up, definitely deserves some of that credit for making the change.

1. It’s no coincidence that the Flyers really kicked things into gear when they made a change following a 5-0 drubbing at the hands of the Devils — reuniting its two best players, Sean Couturier and Claude Giroux, on the same line. Since then, Giroux has 15 points, Couturier has 12 and Jakub Voracek on the other side also has 13. Their expected goals percentage in that time frame is hovering near 60 percent.

For the Flyers to be a legitimate contender they need Giroux back at his best and his last month suggests that’s indeed happened – it’s a big reason they’ve looked so dominant. Giroux has had a bit of an up-and-down season with a mixed bag of linemates, but next to Couturier and Voracek is home and it’s no wonder he’s looked much better since. Aside from that, the big difference is that Giroux has been on the wing rather than at center, and that’s where he really excels at this stage of his career. This season Giroux has an average Game Score of 0.70 when playing center scoring at a 49-point pace with a 50.7 percent expected goals rate. At wing, his average Game Score improves to 0.91 thanks to a 67-point pace and a 55.8 percent expected goals rate.  [theathletic.com]

Now, let's quickly take a look at some recent NHL power rankings that dropped on Thursday, starting with ESPN's Emily Kaplan, who has the Flyers at sixth, one spot behind the division-leading (for now) Capitals.

The Flyers have been without Nolan Patrick all season, as the 21-year-old manages a migraine disorder. If he returns at any point this season, it will give Philly the No. 3 center it has long coveted.  [espn.com]

Over at NHL.com, David Satriano also has the Flyers up into sixth place, again one spot behind Washington despite their win over the Caps on Wednesday night and their dominance against them this season.

Miss: Philadelphia coach Alain Vigneault announced after the game Wednesday that van Riemsdyk broke his hand in the first period while blocking a shot. It is unknown how long the forward will be out.  [nhl.com]

The Flyers win streak may have been extended last on Wednesday night, but the Flyers got some bad news in the process, losing James van Riemsdyk for the foreseeable future after he broke a bone during the win.

James van Riemsdyk exited in the first period and did not return after taking a Jonas Siegenthaler shot off his right hand.

During an in-game interview with analyst Brian Boucher on the NBC Sports Network broadcast, head coach Alain Vigneault said it didn't look real good after van Riemsdyk underwent an X-ray on his hand.

In hockey, a broken finger alone can cost a player a month. A broken hand is obviously worse. After the Flyers' 5-2 win, Vigneault told reporters at Capital One Arena that van Riemsdyk did in fact break his hand and how long the 30-year-old will be out was still uncertain.  [nbcsports.com]

As of publishing, there's still no timeline for his return, but with only a month left in the regular season, it wouldn't be shocking if he's sidelined until at least through the first round of the playoffs, if he returns at all.

UPDATE [5:10 p.m.] — It turns out it wasn't a broken hand, but rather a broken finger for JVR. He'll be out 4-6 weeks, according to the Flyers, which means he could be back for the playoffs...

AV said it was a similar break like Scott Laughton for JvR. Four to six week timeframe suggests he could be an option in playoffs.

So, what do the Flyers have in front of them over the finally month of the regular season? And how does that compare to the other teams behind them in the stacked Metro division? Funny you should ask, because Sam Carchidi of the Inquirer has exactly that, as well as bunch more important info for Flyers fans in his latest newsletter.

Capitals (86 points): 16 games left — eight home, eight away. Six games against teams in playoff spots, including two at Pittsburgh and one in St. Louis.

Flyers (85 points): 16 games left — nine home, seven away. Seven games against teams in playoff spots, including Boston, Tampa Bay, St. Louis, Dallas, and Pittsburgh. The Flyers will play six of their next seven games at home, where they are 23-5-4.

Penguins (82 points): 17 games left — eight home, nine away. Five games against teams in playoff spots, including two with Washington, the Islanders, and at Philadelphia on March 29.

Islanders (78 points): 17 games left — seven home, 10 away. Seven games against teams in playoff spots, including contests at Vancouver, at Edmonton, at Pittsburgh, at Toronto, and at Philadelphia.

Blue Jackets (79 points): 14 games left — five home, nine away. Ten games against teams in playoff spots, including road contests against Edmonton, Vancouver, Boston, Toronto, Tampa Bay, and Dallas. In other words, if the Jackets, who were decimated by free agency in the offseason, get into the playoffs, John Tortorella will probably be named coach of the year.