Leonard Nimoy, known as Spock on 'Star Trek,' dies at 83

By Will Dunham
Reuters
Obituary Television 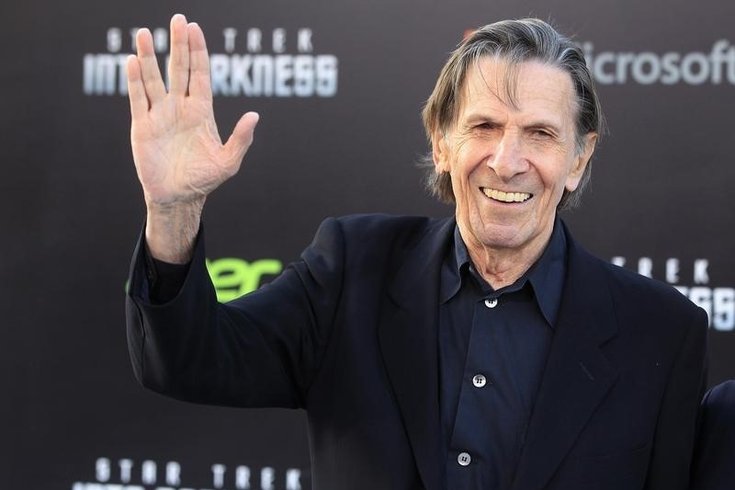 Leonard Nimoy, the actor famous for playing the logical Mr. Spock on the television show "Star Trek," died on Friday at age 83,.

Read More
Leonard Nimoy, famed for his portrayal of Mr. Spock on the "Star Trek" science fiction TV series and movies, has died after battling chronic obstructive pulmonary disease, the New York Times reported on Friday. He was 83.
The paper, citing confirmation from his wife, Susan Bay Nimoy, said Nimoy, who had grappled with a love-hate relationship for his logical human-alien screen self, died Friday morning at his Los Angeles home.
Last year, Nimoy disclosed on Twitter that he had been diagnosed with chronic obstructive pulmonary disease (COPD), a progressive lung disease such as emphysema or chronic bronchitis.
"I quit smoking 30 years ago. Not soon enough," he tweeted to his 810,000 followers. "Grandpa says, quit now!!"
Star Trek fans throughout Philadelphia reacted to the news with sadness.
“Obviously, I’m very saddened,” said Graham Myers, an employee at Atomic City Comics on South Street. “He was a great champion of the arts and sciences. He brought a great deal of gravitas and dignity, not only to his role in Star Trek, but to science fiction in general. It’s very sad to see his passing.”
RELATED: Twitter reacts to the passing of Leonard Nimoy, known as Spock on 'Star Trek,'
Nimoy had other roles during a long career in TV, film and theater, and directed successful movies, wrote books, composed poetry, published photographs and recorded music. But he will be forever linked to the half-Vulcan, half-human Spock in the original 1960s "Star Trek" TV series and subsequent movies.
Known for suppressing his emotions and using strict logic to guide his actions, Spock became one of the best-known and most beloved sci-fi characters of the late 20th century.
For years, Nimoy resented that Spock defined him but came to accept that his life would be intertwined with the alien who inspired a fervent fan following for "Star Trek."
Nimoy had often battled "Star Trek" creators during the original series over their conception of Spock, and his input was responsible for developing many aspects of the character.
He came up with the Vulcan nerve grip that rendered foes unconscious, as well as the split-fingered Vulcan "live long and prosper" salute, which he said was inspired by a gesture he had seen worshippers make in his synagogue when he was a boy.
Nimoy signed off his tweets with "LLAP," an abbreviation of Spock's trademark phrase "live long and prosper."
Myers, who grew up watching Next Generation with his father, said Nimoy’s Spock character brought a sense of seriousness to science fiction that enabled the genre to feed into the mass social consciousness.
“Spock is what you could say people aspire to be in a science fiction setting – collected, engaged, focused and compassionate,” Myers said.
Josh O’Neill, owner of Locust Moon Comics in West Philadelphia, said there was a “certain kind of vulnerability” to Nimoy’s performance as Spock that enabled the character to grow legendary.
“Spock is an icon — he really is,” O’Neill said. “There’s never been another character like that. He’s something that people carry around in their heads, this sort of vision of a totally honorable, totally reasonable dude who was more prone to emotion.”
Brian Johnson, manager of Brave New Worlds in Old City, said, in many ways, Spock is a greater character than Captain Kirk. In a strange way, Johnson said, Spock almost seemed more human, despite being half-alien.
“For me, as a kid, the stuff with the whales was always cool,” Johnson said, referencing Star Trek IV: The Voyage Home. “That always struck me. The Vulcan mind meld is always another thing. Those weird little things, as I kid, always stuck with me.”