D.J. Augustin is off the board for the Sixers, Gordon Hayward is headed to the Hornets as free agency rolls on... 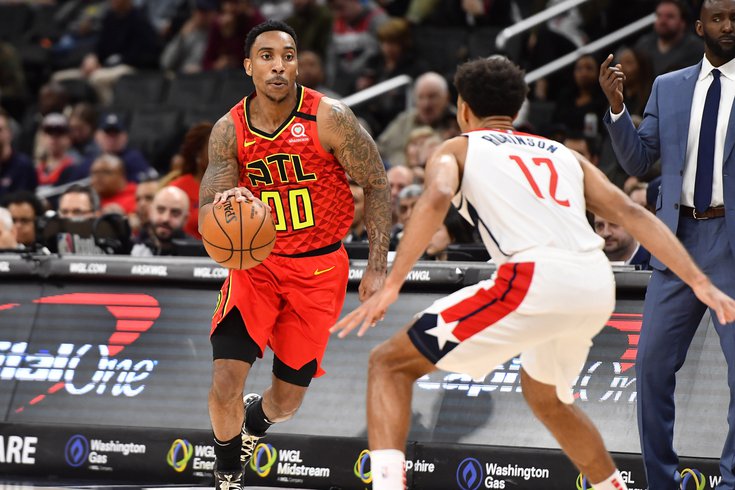 Could guard Jeff Teague be an option for the Sixers in free agency?

UPDATE [1:30 p.m.] — The breaking NBA free agency news continue to roll in, and we've got another update that doesn't directly involve the Sixers, but is one their fans will want to hear about nonetheless.

According to Adrian Wojnarowski, Gordon Hayward is leaving Boston and signing a massive 4-year deal with the Hornets worth $120 million.

UPDATE [12:17 p.m.] — We're into the afternoon on the East Coast, and it appears this whole free agency thing is beginning to pick up some more steam. According to both Adrian Wojnarowski and Shams Charania, free agent point guard D.J. Augustin will be signing a three-year deal worth $21 million with the Milwaukee Bucks.

Obviously this is important to the Sixers not only because the Bucks are a major contender out of the East, but also because Augustin is a player that would have been a nice fit in Philly. Unfortunately that contract likely priced the Sixers out, as they're more focused on players they can afford with their mid-level exception.

Now, Augustin goes to a competitor, while the Sixers' need at point guard remains. Stay tuned...

UPDATE [12:09 p.m.] — This isn't really a Sixers move, but it's obviously related to the Sixers. According to Shams Charania, free agent point guard Raul Neto won't be back in Philly (as expected) and will instead sign a one-year deal with the Washington Wizards.

Not only is this of interest to Sixers fans because Neto played here last season, but also because they're likely still in the market for a backup point guard of their own. This is one off the board, but also one less team presumably in the market for PG depth.

Welcome to Day 2 of NBA free agency after an opening night that saw several big moves — and locally, saw the Sixers lure Dwight Howard to Philly to back up Joel Embiid at center.

It appears to be a low-risk move for the Sixers, who brought in the 34-year-old big man on a one-year deal for the veteran minimum after a successful season in Los Angeles, one in which Howard won an NBA title alongside LeBron James. But the Howard deal, which can be officially signed as early as Monday, does not mean the Sixers are done in either free agency or the trade market.

For starters, there were two other needs our own Kyle Neubeck identified in addition to a backup center: a bench scorer/playmaker and a defensive-minded forward. At the moment, the playmaker spot seems like the bigger need, and specifically what type of player they look for there depends on how you think Doc Rivers' starting lineup will look. Will Ben Simmons be back at point guard with Danny Green and Seth Curry both getting plugged in? Or will he stay at forward, where the team was trying him out last year before he was injured? If it's the latter, the Sixers will need someone to bring the ball up on offense, which could either be someone they've yet to add or Shake Milton, which would move one of Green or Curry to the bench.

If Simmons returns to the point, however, it opens up the Sixers options for the type of bench scorer/playmaker that Kyle alluded to in his free agency primer. Could D.J. Augustin or Jeff Teague fit the bill?

Kyle already wrote about Augustin on Monday, but here's a little more on Teague's potential fit from Liberty Ballers:

As for Teague, he was very ineffective during his Hawks run to end the 2019-20 regular season (pre-bubble). What veteran wouldn’t be? They were garbage and Teague had no interest. But during his time in Minnesota, he proved to be about all you could ask for out of a backup point as he transitioned out of the starting lineup. Teague doesn’t offer the same level of 3PT shooting that Augustin does, but he’s efficient enough to keep defenses honest. Both players are solid options as 2nd unit point guards given who is available and what is feasible.  [libertyballers.com]

While the Sixers are up against it salary cap-wise, they still have a mid-level exception to use. And there's always the possibility of a trade that (assuming the salaries match) wouldn't cost the Sixers anything against their bottom line. In fact, if Daryl Morey and Co. want to address both of those remaining needs, they're likely going to need a trade. Unless the Sixers just waive one of their players, which seems somewhat unlikely at this point, the team currently has just one open spot on the roster.

In other words, it doesn't look like the Sixers are done just yet — after all, you don't hire a guy like Morey so he can just sit back and watch other teams make moves. Sure, Morey's made a few massive deals already, like unloading the Horford contract and nabbing a pair of shooters on draft night, but so far the Sixers' NBA title odds haven't improved much, according to TheLines.com. Perhaps their new president of basketball operations has a trick or two left up his sleeve.

As always, we'll keep you up to dare with the latest news and rumors from around the league in our live tracker below, and will continue to top of this post with any relevant rumors regarding the Sixers.