A look ahead to the 2016 quarterback class: Cody Kessler edition 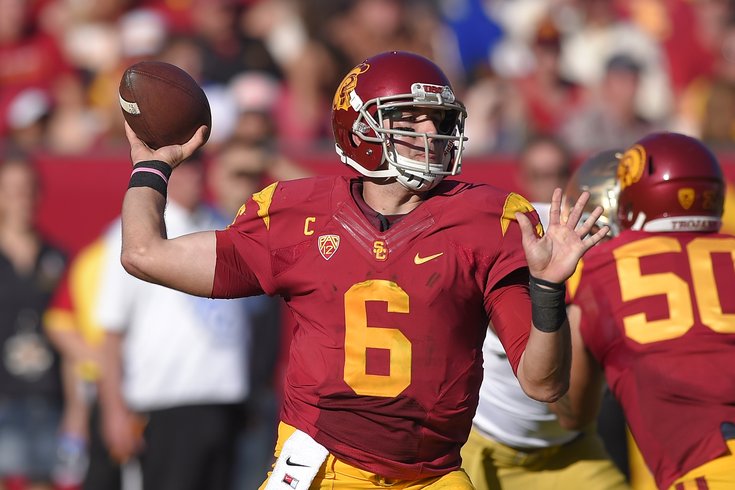 The Eagles will more than likely head into the season with Sam Bradford as their starting quarterback. Bradford, as we all know, is coming off two consecutive ACL tears, which makes him nearly impossible to project going forward. He is also in the final year of his contract, so this is very much a "Let's see what you got" year for Bradford with the Eagles.

If Bradford proves to be anything close to the player many thought he would be when he was the No. 1 overall pick in 2010, the Eagles will more than likely try to sign him to a long-term contract extension. If his career continues to follow the path it has followed over his first five years in the NFL, the Eagles will be shopping for a new QB in 2016.

And so, we've already begun to take a very early look at the quarterbacks who may be available in the 2016 draft. In case you missed the first two entries of this series, you can see them here:

Today we'll look at USC's Cody Kessler (6'1, 210), whose 2014 numbers were outstanding: 69.7 completion percentage, 8.5 yards per attempt, 39 TD passes, 5 interceptions. Because of his breakout season, Kessler is CBS Sports' #2 ranked senior QB behind Connor Cook. Additionally, Chip Kelly has brought in two USC quarterbacks in Matt Barkley and Mark Sanchez, which is worth noting.

According to Tony Pauline, Kessler is thought of by NFL scouts as the best senior QB prospect by a wide margin:

I'm told by a pretty big margin scouts rank Cody Kessler/USC as the #1 senior QB though some are concerned w/his Mark Sanchez like size.

In the first two entries of this series, we showed a number of individual plays that showed the positive and negative attributes that Connor Cook and Cardale Jones bring to the table. For the Cody Kessler edition, we're going to skip that. Unfortunately, the great site draftbreakdown.com only has two videos of Kessler's performances, which were both last year, against Colorado and Arizona State, so we don't have a more extensive library of his work.

However, the Colorado game in particular intrigued me. In that game Kessler was 19 of 26 for 319 yards, 7 TDs and 0 INT. Those are crazy numbers. However, when you watch that performance, it's pretty unimpressive:

There are certainly some nice throws in the video above, but there were also a lot of inaccurate ones as well. The majority of his completions were easy throws, some of which limited the yards after the catch his receivers could get because of imprecise ball placement.

Here's his game against Arizona State:

In the two videos above you see a lot of negatives: Defensive backs getting hands on balls, defensive linemen batting balls down at the line, inaccurate throws, leaving YAC meat on the bone on completions, holding onto the ball for a long time, a lack of zip on window throws and deep throws, and unimpressive mobility.

There are positives though, too. You can see him looking off safeties to help his receivers get open, which is something that backs up notions about Kessler's smarts.

Still, while Kessler may have great stats and intangibles, I have my doubts that his skill set will translate to the next level.