A look ahead to the 2016 quarterback class: Connor Cook edition 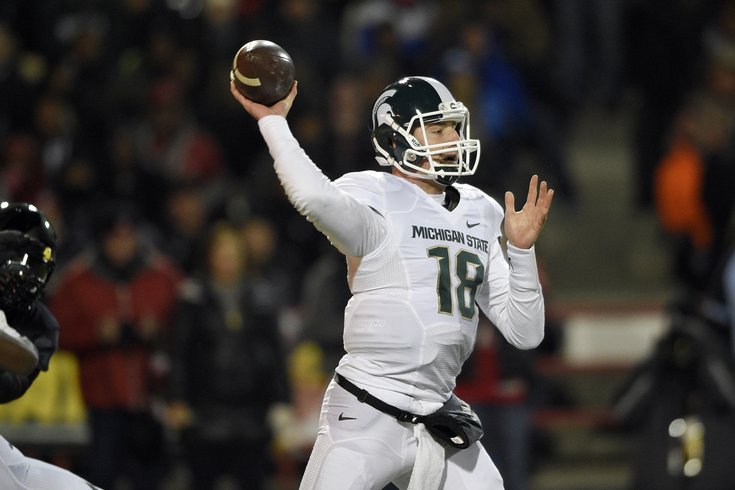 Connor Cook may be the best quarterback of the 2016 NFL Draft class.

The Eagles will more than likely head into the season with Sam Bradford as their starting quarterback. As we all know by now, Bradford is coming off two consecutive ACL tears, which makes him nearly impossible to project going forward. He is also in the final year of his contract, so this is very much a "Let's see what you got" year for Bradford with the Eagles.

If Bradford proves to be the player many thought he would be when he was the No. 1 overall pick in 2010, the Eagles will more than likely try to sign him to a long-term contract extension. If his career continues to follow the path it has followed over his first five years in the NFL, the Eagles will be shopping for a new QB in 2016.

And so, let's begin to take a very early look at the players who may be available in the 2016 draft, starting with Michigan State's Connor Cook, who will be a senior for the Spartans in 2015. Cook is the favorite to be the first QB off the board in the 2016 NFL Draft.

If Cook had come out in 2015, I wonder if the Titans might have liked him better than Marcus Mariota. In the 2015 draft, there were a number of quarterbacks who did not play in pro-style offenses in college, and, therefore, were more difficult to project to the NFL. Cook and most of the other top QB prospects in this class will be easier projections to the NFL, having played in more traditional offensive schemes, whereas guys like Mariota and Bryce Petty were coming from spread offenses.

Cook has prototypical size at 6'4, 220 pounds, and he has an excellent arm. Here's his arm on display in the Rose Bowl against Stanford after the 2013 season. He is forced to throw flat-footed with pressure in his face, and he delivers a 25-yard rope to his receiver. This is all arm.

You either have that kind of arm, or you don't. Cook does. Here's another throw with a man in his face against Ohio State:

Here's a gorgeous window throw to the back of the end zone. Cook's tight end isn't able to make a play here, but this is a pro throw.

Here's an effortless deep ball on the first play of the game against Ohio State:

And a touch throw against Nebraska:

There are no shortage of great throws like the ones noted above. However, Cook needs to be more consistent with his accuracy. His numbers the last two seasons at MSU:

In his two full seasons as Michigan State's starter, Cook has not topped a 60% completion percentage. That is concerning, but also a little misleading. Cook's receivers often didn't get much separation, which led to more difficult throws, and his receivers seemed to drop a higher than average number of passes in the games I watched. Still, while you could easily put together a highlight reel of impressive throw after impressive throw, he will miss some easy ones.

There are some things I like about Cook's pocket awareness, some things I don't. When you watch him, his feet always seem to be moving in the pocket, almost to an extreme. He almost looks jittery, but there's a certain poise that he maintains while moving his feet. For example, again from the Stanford game, I love the play below. Cook initially doesn't like what he sees downfield, so he steps up, bails from the pocket, and spots his fullback coming open. Most QBs would just throw it, but watch as Cook takes a quick peek back behind him first because he had already seen the DE fly upfield to his left in his peripheral vision as the play was developing. Instead of just letting it rip, he wanted to make sure the DE wasn't bearing down on him to strip the ball away when he tried to throw. Once he knew it was safe, he delivered the pass on target and the fullback was able to run after the catch anyway.

That's excellent awareness, and Cook shows there that he can process a lot of information. But he needs to settle down. Here against Nebraska is where you see the jittery version of his pocket presence on the first play of the game. He's over-active moving in the pocket, and he doinks a low reward throw off a defender's helmet, which ends up being a pick.

Can he run? Well, he's not Michael Vick by any stretch, but he's at 6'4, 220, he's more often than not going to fall forward for you on sneaks, and he moves well enough that opposing defenses would at least have to respect the threat of Cook running in the Eagles offense. The Cardinals, for example, dared Nick Foles to run and tried to punish him every time he did. They would have to respect Cook as a runner more than Foles.

And here he is running Mike Alstott style:

Projecting pocket passers into a spread offense is a hell of a lot easier than the other way around, and my guess is that the Eagles will value what Cook does well.

(Note: The videos above cropped together by draftbreakdown.com. You can watch Connor Cook's games on their site here).