A look at Carson Wentz's red zone and third down efficiency, explosive plays, and fumbles 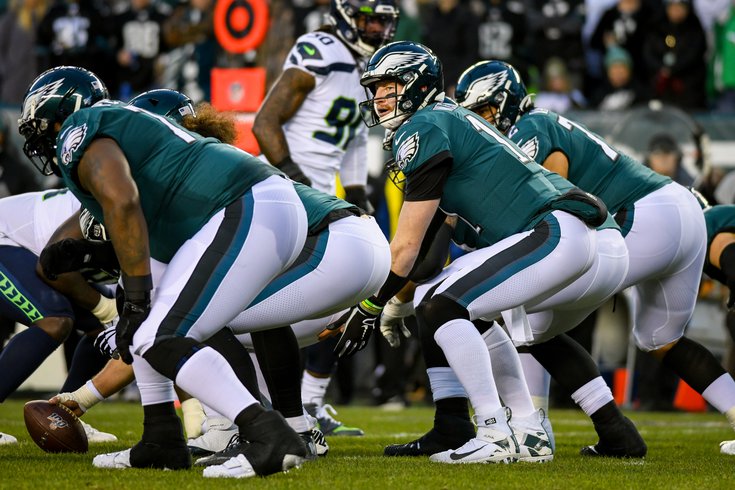 Carson Wentz during the Philadelphia Eagles wild card game against the Seattle Seahawks at Lincoln Financial Field in Philadelphia on January 5, 2020.

In previous offseasons, Carson Wentz has identified some facets of his game that he felt needed improving, from mechanics, to diet, to situational football.

During the 2020 offseason, Wentz said that his focus is on red zone, third down, explosive plays, and his fumbling issues. Let's take a look at all four of those themes, and show where he is at this point in his career, as well as future outlook.

"Red zone and third down, that’s going to be something I’m going to hit on every year, whether we’re first in the league or last in the league, just because I’ve really realized over the first couple of years of my career that those downs make or break ballgames, all the time," Wentz said.

Red zone effciency has been a clear strength of Wentz's over the last three seasons, as he's been a lot closer to "first in the league" than "last in the league." His numbers:

• Wentz's ability to keep plays alive is obvious. He's good at escaping the pocket and keeping his eyes down the field while extending the play, and then throwing accurately on the run.

• The other obvious component of Wentz's red zone prowess is his arm strength. He has the ability to fit balls into tight windows, as he showed repeatedly in the video above. It should be noted that his accuracy on power throws is also impressive. There aren't a ton of cheapies in the video above. Many of those touchdowns are "only X number of guys on the planet can make that play" kinds of throws. When you consider that he attempts such a high number of throws with that level of difficulty, it makes his 60:1 TD:INT ratio that much more impressive.

• What you don't really see in the video above is that the Eagles would often go tempo in the red zone. Wentz was good at getting to the line quickly, identifying mismatches and/or confused defenders, and attacking them. And then just generally speaking, he is good at identifying the open receiver, and making quick decisions.

Overall, Wentz has the skill set to be a great red zone quarterback. He's smart, he's tall, he can extend plays, and he has a big arm. It's a positive that Wentz is continuing to perfect his red zone craft, but any improvements will come on the mental side, where again, he's already very good.

Because of Wentz's physical skill set, Doug Pederson has the luxury of being aggressive on, say, 3rd and 15, when other play callers would simply run a coward's draw, or some other "give up" play. A look at the Eagles' third down efficiency in the Wentz era:

In 2017, the Eagles' third down percentage actually dipped quite a bit after Wentz tore his ACL. Otherwise, they would have easily been first in the league in that metric.

In 2019, the top five teams in third down efficiency were as follows:

In other words, it was Patrick Mahomes, Wentz, and three teams with elite rushing attacks. Factor in that the leading rusher during the Wentz era has been Wendell Smallwood, and again, it's all the more impressive that they have managed to be such an efficient offense in this metric.

"I would also love to see us have some more explosive plays," Wentz said. "We had a lot of long drives last year, and obviously hopefully getting DeSean back and some of these younger guys can help lend itself to more explosive plays. Maybe we don’t always have to put together 15-play drives. If that’s what we have to do, then that’s what we have to do."

In 2019, the Eagles had six pass plays of 40-plus yards. Only three teams had fewer. Of course, two of the Eagles' big plays came via DeSean Jackson in Week 1 against The Washington Football Team. The remaining four 40-plus yard plays were made by Miles Sanders (he had two), Nelson Agholor, and Deontay Burnett.

The Eagles recognized their brutally obvious lack of team speed, and spent three picks on speed receivers in the 2020 draft, while also trading for track star Marquise Goodwin (who has since opted out of the 2020 season).

As Wentz notes, the Eagles had to compensate for that lack of an explosive weapon in the offense by putting together long drives. In fact, the Eagles had 23(!) scoring drives of 10 or more plays in 2019:

While they actually got quite good at executing those types of drives over the course of the season, mainly due to Wentz's ability to convert both on third down and in the red zone, playing offense in the NFL is a lot easier when you have guys who can actually make an occasional big play either on their own via a run after the catch, or deep down the field.

"For me personally, just taking care of the ball," Wentz said. "I’ve limited interceptions over the years. I just have to keep getting better at in the pocket, holding onto the ball. Trying to extend plays, knowing when to say die, and when to try to stretch the play out. We’ve talked about that a lot. That’s something that I’m always going to try to learn and be hard on myself."

Wentz has 48 career fumbles. In 2019, he had 16 total fumbles, seven of which resulted in turnovers. Because fumbles are often attributed to the quarterback, when in reality they could be the fault of a running back because of a poor exchange or a bad snap by a center, during the 2019 season I took a look at all of Wentz's fumbles (he had 14 at the time), to get a better feel for how many were Wentz's fault. Here's the video of that:

Note: In the video, I called DeMarcus Lawrence "DeMarcus Ware" at one point, and referred to Zach Ertz as Wentz, so I'm self-admitting that up front before any dorks can point that out. ;)

Anyway, here's how I would categorize Wentz's 16 fumbles in 2019 (with the two omitted fumbles in the video above added in):

In other words, I'd blame Wentz for eight of them, or half. Still, it is clearly the No. 1 thing that Wentz has to clean up going forward.

If you're a "glass half empty" type, you'll view that as a continued huge cause for concern going forward, because he's heading into his fifth season and it's still not fixed. If you're a "glass half full" type, it's seemingly a relatively easy thing to correct, at least on the spectrum of possible quarterback issues.