The concert takes place Sept 3-4 on the Ben Franklin Parkway. As preparations begin, the first road closures go into effect on Sunday, Aug. 28

By Maggie Mancini
PhillyVoice Staff
Transportation Made in America 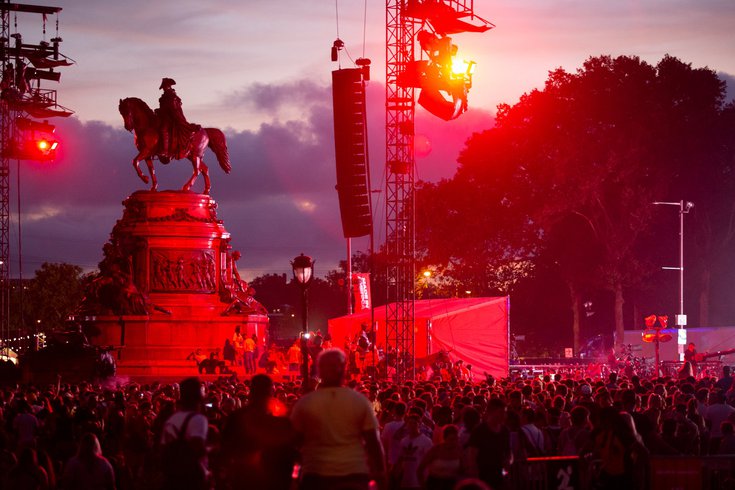 The Made in America Festival takes place on the Benjamin Franklin Parkway from Sept. 3-4. There will be road closures and parking restrictions leading up to the weekend-long music festival. The file photo above shows Eakins Oval during 2018's concert.

The Made in America Festival returns to Philadelphia over Labor Day weekend for the concert's 11th year. On the bill are headlining performers like Tyler the Creator, Bad Bunny, Lil Uzi Vert, and Jazmine Sullivan.

The two-day festival, produced by Roc Nation and DPS, takes place Sept. 3-4 on the Benjamin Franklin Parkway. In advance of the concert, Philadelphia officials have released important details about road closures (some of which take effect Sunday night), parking restrictions, changes to public transportation routes, prohibited items in at concert and safety information – all of which will be useful for city residents and those coming here for the concert.

Following two police officers being shot at the city's Fourth of July concert and fireworks display, the city and Made in America organizers said they are enhancing the festival's police presence and adding more emergency medical services along the parkway.

Doors for the festival will open each day at noon, with performances beginning Saturday by 1 p.m. and running through midnight and then on Sunday from 1 p.m. until 11 p.m. Tickets, lineup, and general information about the Made in America Festival can be found on its concert's website.

To accommodate construction for Made in America, some lane restrictions and road closures along the Ben Franklin Parkway and in sections of the Fairmount and Logan Square neighborhoods will begin as soon as Sunday, Aug. 28. The number of streets that are closed or have restricted parking will increase each day through the conclusion of Made in American and during the cleanup.

All roads will reopen prior to the morning rush hour on Tuesday, Sept. 6, though some parking and lane restrictions will remain in place until 11:59 p.m. on Tuesday.

Travel delays should be expected in the days leading up to the festival, and commuters are encouraged to avoid the area and take alternate routes to avoid the parkway before and during Labor Day weekend. Double parking should also be avoided, as it's illegal and amps up road congestion.

The dates and times of the city's road closure plan is outlined below. There may be additional closures as needed in the days leading up to the festival. Motorists are urged to obey signs and instructions posted by Philly police.

SATURDAY, Sept. 3 at 3 a.m.
• CLOSED: The entire width of the Benjamin Franklin Parkway, beginning at 20th Street extending west through Eakins Oval to 25th Street
• CLOSED: 20th Street, between Arch and Vine streets
• CLOSED: 21st Street, between Winter and Hamilton streets
• CLOSED: 22nd Street, between Winter and Spring Garden streets
• CLOSED: 23rd Street, between Benjamin Franklin Parkway and Pennsylvania Avenue
• CLOSED: Spring Garden Street Tunnel
• CLOSED: Spring Garden Street Bridge. The city will make every effort to keep this open during the Philadelphia Museum of Art's operating hours but may have to close it during periods of heavy pedestrian use.
• CLOSED: Kelly Drive, between Fairmount Avenue and Eakins Oval
• CLOSED: Martin Luther King Jr. Drive, between Falls Bridge and Eakins Oval
• CLOSED: I-676 westbound off-ramp at 22nd Street
• Short duration, intermittent closures of 2200 through 2400 blocks of Pennsylvania Avenue will take place Saturday and Sunday for movement of equipment. Motorists are advised to use caution when driving in the area and obey instructions from the Philadelphia Police Department. All roadway reopen at 5 a.m. Monday, Sept. 5

SEPTA and OTHER TRAVEL OPTIONS

Broad Street and Market Frankford Lines: Local train service will operate on a normal weekend schedule throughout the day on Saturday and Sunday. Race-Vine and City Hall Stations on the Broad Street Line and 15th Street Station on the Market Frankford Line provide easy walking access to the festival gates. Market Frankford and Broad Street Owl buses provide overnight service as usual.
Regional Rail: Late-night train service will be available on Saturday and Sunday nights departing from Jefferson, Suburban, and 30th Street stations. Special schedules will be posted in stations and is available online. Parking is free at all SEPTA-owned Regional Rail lots on weekends.
Trolley: Trolley routes 10, 11, 13, 15, 34, and 36 offer service to and from the concert, with 19th and 22nd Street stations providing easy walking access to the Benjamin Franklin Parkway.
Bus: Due to festival-related street closures, SEPTA routes 7, 32, 38, 43, 48 and 49 will be detoured from their normal routes around the Benjamin Franklin Parkway. Specific route changes are available online.
PHLASH: Use to visit major attractions in Center City and in the vicinity of the parkway with stops at 22 locations. Find PHLASH on the go, with live updates online.
Rideshare: Taxi, Uber, and Lyft have designated drop-off and pick-up locations along the 2100 block of Spring Garden Street.
Indego Bike Share: Attendees using Indego to get to the festival should check the mobile app to confirm dock and bike availability in real time. The Art Museum Indego station will be temporarily relocated to accommodate the concert stage.

If driving, commercial off-street parking lots and garages are located on and around the Benjamin Franklin Parkway. Concertgoers should contact specific facilities in advance for rates and availability or visit the Philadelphia Parking Authority's website for a list of parking options.

The Made in America Festival features multiple entrances and exit gates for attendees. Entrances are at 21st Street and the Benjamin Franklin Parkway. Re-entry to the venue will not be permitted on either day. There is an ADA-accessible entrance on 21st Street, and those arriving via vehicle can be dropped off at 24th Street and Park Towne Place.

The perimeter of the festival will be secured and protected for public safety. The event boundaries are:

The city and Made in America organizers are working with local, state, and federal public safety authorities create a network of prevention and response services. There will be an enhanced police presence for the entire duration of the festival.

Made in America has also partnered with iDeko to compile and address community questions or concerns. You can contact the hotline at (912) 732-7501.

Access to the venue is limited to ticket holders, who will be searched before entering the venue. Ticket holders may be searched while inside the venue at the discretion of security staff. The festival has a clear bag policy, and all bags are subject to search as well.

Attendees can bring factory-sealed plastic water bottles or a refillable bottle that can be filled at a water station inside the venue. Blankets, towels, umbrellas, non-professional cameras, cell phone cameras, and other personal items are allowed inside the venue.

Items not allowed at Made in America include weapons of any kind (regardless of legal permits), drones, fireworks or explosives, illegal or illicit substances, food or any beverages from outside of the venue, pets other than service animals, chairs, glass containers, skateboards or motorized vehicles, coolers, laser pointers, spray paint, professional cameras, glow sticks, musical instruments, large signs, or any other item determined by security to be a risk to public safety.

Made in America is an all-ages event. Adults ages 21 and older must present valid ID in order to be allowed inside of the festival beer garden or to purchase alcohol during the concert.

Missing or lost people can be brought to the main merchandise table at 2100 Benjamin Franklin Parkway. Location markers will be posted throughout the venue for clear communication in the event of an emergency. EMS tents will be located near the entrance between 21st and 22nd streets, at the north side of 23rd Street and Benjamin Franklin Parkway, and near the Rocky Statue to the right of the main stage.

Made in America is a rain or shine event. Attendees can sign up for free weather and emergency alerts by texting "READYPHILA" to 888-777, and in the case of severe weather, should listen for announcements broadcast across the festival grounds.

EMS personnel will be available all day to assist attendees, and urge festival-goers to understand the warning signs of heat-related health issues.

For more information on the festival venue, concessions, accommodations and directions, check out Made in America's website.