Eagles mailbag: Who inherited a better situation: Doug Pederson in 2016, or Nick Sirianni in 2021? 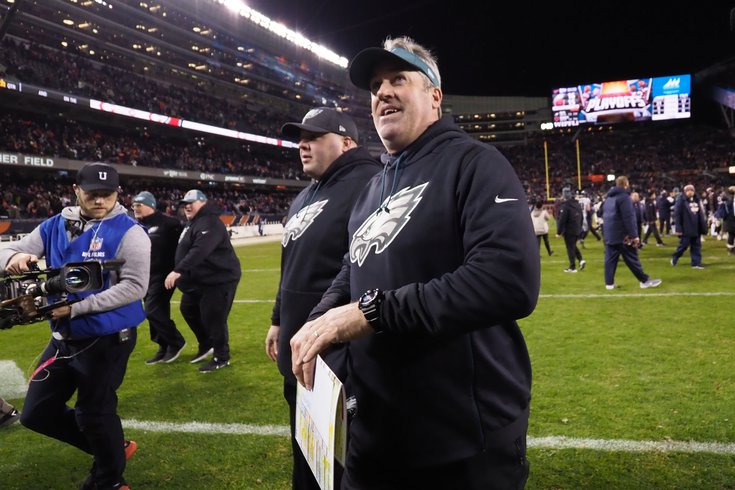 Question from Kephas: If you had to compare the Eagles' offseason situation in 2016 vs. now (let's say before they hired Pederson & before they hired Sirianni), which team looked to be in worse shape? I know they're over the cap and have major QB issues, but in 2016 they had Sam Bradford, a meh draft pick, and some pretty bad contracts.

In my view, the team was in far better shape in 2016 than it is now. It all starts with the cap situation. Yes, they had some bad contracts, like any team, but they weren't overrun with them. The worst contract was probably Byron Maxwell's, which looking back, is child's play compared to some of the bad contracts on the current roster.

Maxwell was scheduled to count for $9.7 million on the Eagles' salary cap that season. They saved $4.9 million by trading him for literally anything. The 2021 Eagles would kill for that to be their worst contract.

In December, OverTheCap.com put out a list of the 25 worst contracts in the NFL. Carson Wentz came in at No. 9, and they deemed Alshon Jeffery's contract to be the worst in the NFL.

Beyond those two well-documented players' contracts, if I were to count the number of contracts that the Eagles would probably prefer to just be free and clear of, with no penalties, but they don't have that option, you could come up with quite a list. I'll give it a go:

Those 14 players' 2021 scheduled salary cap numbers add up to $193,213,818. The NFL salary cap number per club this year is reportedly likely to be in the ballpark of around $185 million. And again, we're only talking about 14 players here.

In other words, the Eagles are going to have to take a number of those contracts and kick the can down the road some more, just to get under the cap in 2021, and they are going to be among the league's most unhealthy cap teams at least into 2022, and probably even beyond that.

But beyond the atrocious cap situation the Eagles are in, many of the same core players were on that 2016 team, but they were younger and either entering their primes, or already in them, and they hadn't yet lost some other good players as cap casualties. Jordan Hicks was 24, and had showed some legitimate promise. Cox, Johnson, and Ertz were all 26 years old. Graham was 28. Kelce and Malcolm Jenkins were both 29. We were only beginning to wonder when Jason Peters might retire, lol. And obviously, the great Donnie Jones was still on the team.

And the team had money to spend in free agency. For example:

If the Eagles are lucky, they'll be able to bring in a few Brooks- and Tulloch-level players this offseason.

Question from dirk diggler: Who will be the last player standing from the Super Bowl team?

Here's a handy-dandy little look at the flip card from the Eagles' Super Bowl, from the great Deniz Selman:.

Just 17 players & 4 coaches (for now) remain from the #Eagles roster that won Super Bowl 52, and close to half those players and all but one coach are likely to be gone this offseason. Feels like decades ago for so many reasons. #FlyEaglesFly pic.twitter.com/7c1CMAq2CX

Including the guys on IR for that game, you would add Carson Wentz and Jason Peters.

So there are 19 players left. I would anticipate that the following guys very likely won't be back in 2021:

So after those projected losses, we're down to 12.

Next, we'll eliminate the older guys:

My next three cuts are Wentz, Barnett, and Mills, because their roster statuses in 2021 are up in the air.

And then I'll eliminate Elliott. He's not going anywhere in 2021, but he'll be gone after this season if he has a repeat of 2020.

So I'll take Lovato. I'm glad you could go on this journey with me.

Question from 4for4Ryan: Who do you realistically see being cut to clear cap space/rid the org of aging and oft-injured veterans, etc? There's NO WAY Jason Peters is back... right?

We covered JP in our "OT stay or go" piece, but yes, for sure it would be asinine to bring him back again. He's a free agent though, so they wouldn't be cutting him. They just wouldn't re-sign him.

The easy cuts are the two Jacksons (DeSean and Malik), Jeffery, and Marquise Goodwin. As we laid out in our "TE stay or go" piece, the belief here is that the team will also have to cut Ertz, as in, they won't even be able to trade him.

Unfortunately, the Eagles don't have many players they can just cut for cap savings, and as we've noted repeatedly here, they're going to have to restructure a bunch of contracts just to get under the cap by mid-March.

Question from Norm Snead: Did Doug tank his post season meeting with Lurie because he wanted out?

I mean, I wasn't there, but if I were to venture a guess, I would say he communicated what he wanted, perhaps knew it would not be received well, and didn’t care if the outcome was his firing.

Question from RKotite: At the Eagles scribe combine, who's running the fastest 40, who's throwing the most reps up at 225 and who is absolutely blowing the interview process?

Rob Maaddi would win the bench rep event, for sure. If Turron Davenport were still here, he'd be an easy choice to dominate the 40, since he's a former college receiver. With Turron in Tennessee, I would narrow it down to Daniel Gallen and Martin Frank. Gallen used to run a sub-five-minute mile, which... 🤯. I'm not sure what kind of sprinter he is, but that's good enough for me to take him. As for the bad interview, I'm not touching that one.