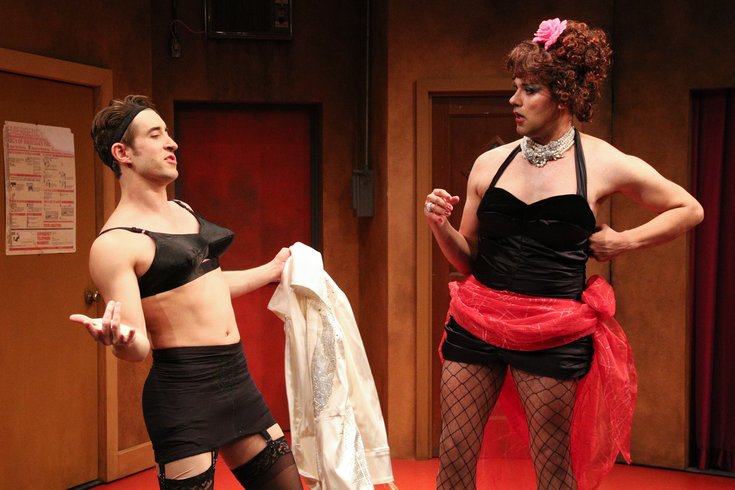 Matteo Scammell (left) and Dito van Reigersberg rehearse for “The Legend of Georgia McBride,” now playing at the Arden.

You could say that Dito van Reigersberg is two of Philly’s most popular performers — under his own name he’s one of the co-founders of Pig Iron Theatre Company and a regular on local stages, while his alter ego Martha Graham Cracker is the city’s most popular (not to mention tallest and hairiest) drag queen. Those two sides of van Reigersberg’s identity come together in the Arden’s new production of Matthew Lopez’s “The Legend of Georgia McBride,” though Martha stays at home. In the play, van Reigersberg plays Miss Tracy Mills, a southern drag queen on the decline who helps rejuvenate a failing nightclub run by a down-on-his-luck Elvis impersonator. We spoke over the phone earlier this week as the actor prepared for his first preview performance.

What attracted you to this role?

I think what drew me to it was both the strange joy of the piece and the chance to be a different kind of drag queen. It’s such a rollicking, quick comedy, which is a real challenge, but it’s much more disciplined than a Martha Graham Cracker show. Martha improvises everything except the music. The band and I rehearse the songs, but the interstitial material is all dependent on who’s there, what the audience is giving me, maybe what happened to me today or what I’ve been thinking about, so it’s kind of a strange ride through my subconscious on that day. This is more disciplined in terms of everything happening according to the script and also because Tracy Mills is a lip-syncing drag queen, which is different, obviously, than singing live.

Was it hard to keep Martha from coming through while playing Tracy?

I’m not thinking of it as squelching Martha and bringing out this other person. It doesn’t feel like an either/or thing. I’m trying to use whatever Martha has already given me but also find a new flavor. Tracy Mills is a little bit bossier than Martha and a little bit more desperate. She’s trying to create this illusion of grace, a real southern, genteel sweetness, but she’s working really hard to keep it all together and make things go her way. She’s like a swan above the water; if you know what’s happening underneath, there’s a lot of paddling with her feet.

How different is playing a role as an actor versus performing in drag?

A lot of acting in a regular play is trying to communicate that I want you to believe what I’m doing but I’m not going to invade your space. You get to watch the action and observe it almost like a peeping tom. It doesn’t implicate you in the same way that a drag performance or a cabaret performance does, where there’s a feeling that you and the performer are in the same room and he or she is acknowledging that. We just started changing the staging of the play to break down the fourth wall, so now we work a lot more in the aisle and in the house. That’s made it feel a lot less like a regular play and a lot more like the play that it should be, where there’s a real flirtation between the performer and the people that they find in the audience. 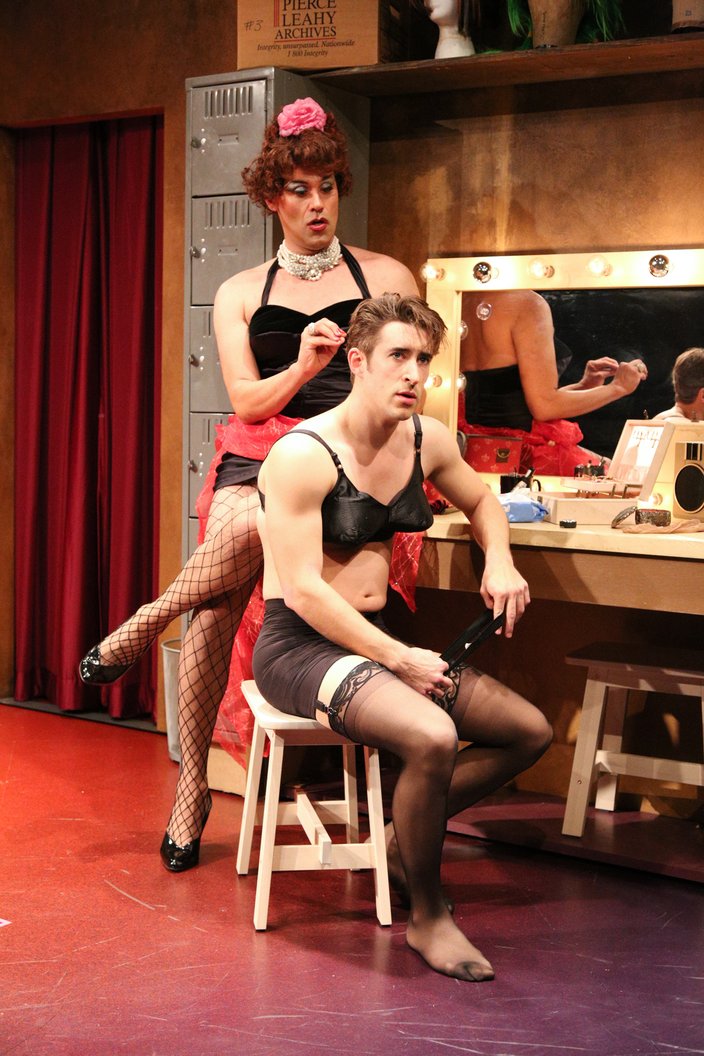 Dito van Reigersberg and Matteo Scammell star in “The Legend of Georgia McBride” at the Arden. The play runs through Nov. 27.

Since you don’t typically lip-sync as part of your act, did you look to any other drag queens as inspiration?

We watched a lot of 'RuPaul’s Drag Race.' It’s so different than singing with your voice; there’s a discipline to the illusion, where I want you to believe that the song is coming out of my body, but you don’t want it to be too dutiful. In the best drag you feel like you’re watching a cartoon come to life in front of you. So there’s the base level of just lip-syncing well, and then there’s the deeper math — can you tickle us and delight us and surprise us? I’m still working on the deeper math.

What was your initial attraction to drag? How did Martha come to be?

Even as a little boy I would lip-sync in the mirror, like I guess a lot of people do. Then I was in acting school, where there’s a lot of encouragement to do things that you don’t normally allow yourself to do. At that time I would go and see drag queens, so I just thought, ‘Why don’t I try to do this?’ I think there has to be something that draws you to it, almost like some untapped lady that you want to let out. For a while I was scared for my father to come see me in drag, but when he finally did, he said, ‘It’s just your grandmother coming through,' and now when I do it, I realize that’s true. You can feel like it’s a kind of possession, if you want to get really highfalutin’.

For a while I was scared for my father to come see me in drag, but when he finally did, he said, ‘It’s just your grandmother coming through.'

The play derives its comedy from the strange mentorship between a drag queen and an Elvis impersonator, but they seem like inherently similar styles. Isn’t donning a sequined jumpsuit and pompadour just another kind of drag?

Absolutely, and I think he realizes it’s not that different than what brings him joy as an Elvis impersonator: big, fun dancing in your body and selling it to a crowd of people. There’s almost a chemical reaction that was waiting to happen, and I’m the catalyst. He just needed to flip one switch and the whole thing starts to work. It’s like the opposite of when Coke decided to change its formula to New Coke. This is changing the formula for the good, and it wasn’t that far from what it needed to be.

It’s interesting, because in the play there’s a scene where you get to meet the male-bodied person underneath Tracy Mills, whose name is Bobby. I actually feel like there’s not a huge difference in terms of who they are, personality-wise. Maybe that’s what I’ve been able to translate from Martha. There is a big difference between Dito and Martha, but it’s just in terms of the size of the person and how much space they take up in the room. Martha is just a dilation of who I am.

This may sound like an odd comparison, but Stone Cold Steve Austin often says that the most successful professional wrestling characters are just the performers’ real selves turned up to 11.

Exactly. Wrestling and drag are probably not as far off as we think they are. They’re both certainly people who want you to buy into a mischievous illusion for a little bit of time.

'The Legend of Georgia McBride'