Bulldogs advance past Sweet 16 for first time since 1999 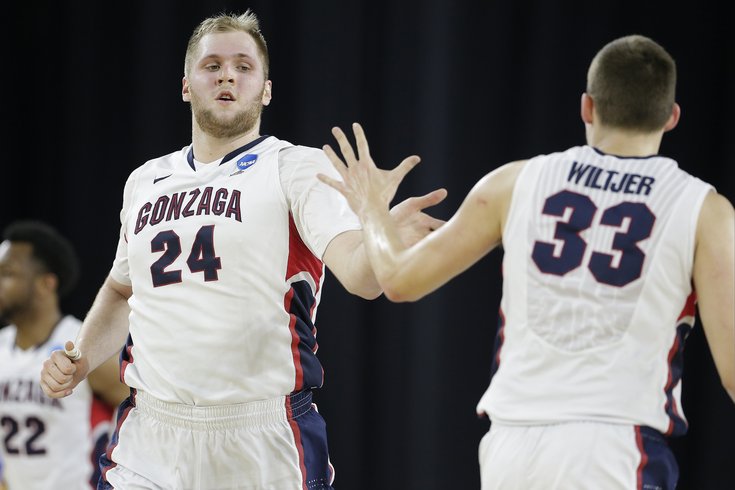 Gonzaga's Przemek Karnowski (24) is congratulated by teammate Kyle Wiltjer (33) during the second half vs. UCLA.

HOUSTON — Growing up in Poland, Przemek Karnowski had to stay up until 2 or 3 a.m. to watch the NCAA Tournament.

Gonzaga's big man got to star in the show in prime time on Friday night, scoring 18 points with nine rebounds to lead the second-seeded Bulldogs to a 74-62 win over No. 11 seed UCLA in the Houston Regional semifinals.

The victory puts Gonzaga (35-2) in the Elite Eight for the second time, its first regional final since 1999. The Bulldogs will play the winner of the Utah-Duke game on Sunday.

"For me it was always a dream to be here and to play deep into the NCAA Tournament," Karnowski said. "And right now I'm here and I'm trying to enjoy every second of it."

Karnowski helped the Bulldogs grab six more offensive rebounds than UCLA, which Bruins coach Steve Alford believes was the key to the game.

"We didn't rebound the basketball," Alford said. "They got too many second shots."

"He was a beast down there, just gobbling up offensive boards," Wiltjer said. "It's so easy for us, especially when we're on the perimeter, to just throw it down to him and he gets a bucket."

"One accomplishment that we haven't done is reach the Final Four and we finally have an opportunity to do that."

The Bruins, who lost in the Sweet 16 for the second straight year, were done in by a tough shooting night that included long stretches without scoring. They were led by Norman Powell's 16 points.

They quieted doubters who questioned whether they should be in the tournament by winning their first two games, but couldn't stay with the Bulldogs on a night when their shots weren't falling. Powell made just 8 of 19 shots and Bryce Alford was 3 of 11.

It's Gonzaga's second win over UCLA this season after also beating the Bruins in December. Gonzaga's only loss to UCLA in the four-game history of the series came in a 73-71 defeat in the regional semifinal in 2006.

It will be the first trip to the round of eight for Gonzaga coach Mark Few, who took over the season after they last made it.

"The one accomplishment that we haven't done is reach the Final Four and we finally have an opportunity to do that," Few said.

The Bruins couldn't find any offense as Gonzaga built its lead early in the second half.

Domantas Sabonis drew ooh's and ahh's from the crowd when the 6-10 Lithuanian grabbed a bounce pass from Karnowski and sailed over Isaac Hamilton for a one-handed dunk that made it 51-37 with 11 minutes remaining.

Karnowski found Sabonis again a few minutes later, when he passed it behind his back and Sabonis finished with a layup to push the lead to 14 points.

Gonzaga was up 13-10 less than six minutes into the game when both offenses went cold, combining to miss the next 19 shots.

There were missed layups, shots from the outside that clanged off the rim and even a couple of air balls. No matter what either team tried, they simply couldn't make a shot for about 6 1/2 minutes. Gonzaga extended the lead a bit with three free throws.

Powell finally ended the field goal drought when he drove into the lane and his layup mercifully fell through the net to cut the lead to 16-12 about eight minutes before halftime. The Bulldogs scored a few seconds later on a jump shot by Karnowski.

VENUE TO BLAME FOR POOR SHOOTING?

With both teams struggling to shoot, many questions were asked about whether the venue caused problems. The games are being played in NRG Stadium, which is home to the Houston Texans, and the setup, with no walls behind either basket, challenges players' depth perception.

But no one on either team would use that as an excuse.

"We just missed shots," Wiltjer said. "You either make them or you don't. We don't really blame it on the arena or anything like that."

Gonzaga: Wiltjer had eight points and 10 rebounds after leading the team in their first two tournament games with 23 and 24 points. ... Sabonis scored 12 points before fouling out late.

UCLA: As their season ends they wait to see if Looney will stay or declare for the NBA.

Gonzaga:Duke Sunday in the regional final.