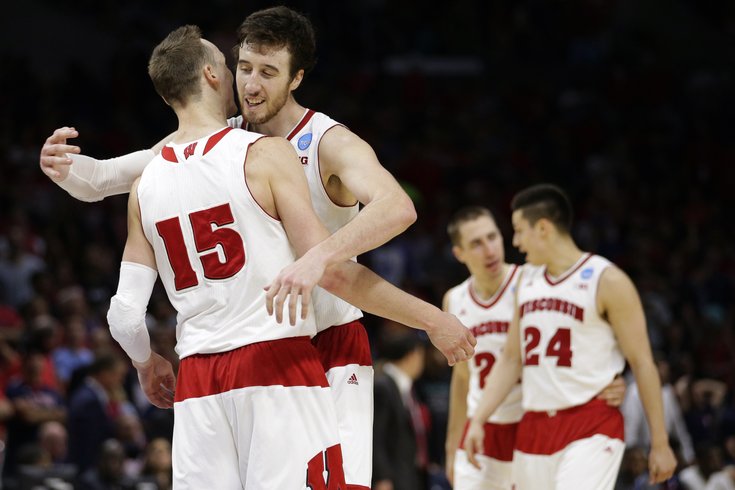 Sam Dekker hit five of Wisconsin's 10 3-pointers in the second half on his way to a second straight career high of 27 points, Frank Kaminsky added 29 points and the top-seeded Badgers beat No. 2 Arizona, 85-78, on Saturday to reach consecutive Final Fours for the first time in school history.

The Wildcats twice got within five points in the last 2½ minutes, but both times Dekker connected on arcing 3-pointers, narrowly beating the shot clock on the first one.

Dekker confirmed the Badgers are more than just "Frank the Tank." The junior followed up his career-high 23 points and 10 rebounds in a semifinal win over North Carolina with timely shooting that bailed out the Badgers.

Wisconsin (35-3) denied the Wildcats (34-4) a Final Four berth for the second straight year, having beaten them by one point in overtime in Anaheim a year ago when their seeds were reversed.

"That loss left a sour taste in our mouth, so we wanted to get back," Dekker said of last season's 1-point loss to Kentucky in the national semifinals. "As a team we set some goals of what we wanted to do, and now we're two games away from our last goal."

"Sam Dekker and Frank Kaminsky, they're really good. No team has done what they did to us in the second half."

The Badgers and 67-year-old coach Bo Ryan head to Indianapolis next week hoping for another shot at undefeated and top-seeded Kentucky.

"I'm so proud of these guys to be able to say that they've answered the bell in the second half in almost every game we've played here in the last seven to 10 games," Ryan said. "They're a tough bunch, and I hope they don't change."

Rondae Hollis-Jefferson and Brandon Ashley scored 17 points each for the Wildcats, who once again failed to deliver a first-time Final Four appearance for coach Sean Miller. McConnell added 14 points in his college finale and Kaleb Tarczewski and Gabe York had 11 each.

"It was tough to be playing hard on defense and trying to get a stop to win the game and he made those shots," Hollis-Jefferson said of Dekker. "It was tough to watch them go in, but in basketball you have those days."

Miller compared the Badgers' offensive execution and ability to make shots to a video game.

"Sam Dekker and Frank Kaminsky, they're really good," Miller said. "No team has done what they did to us in the second half. They made shots, and if they play like that next weekend, they have a chance to win it all."

The Badgers hit 10 of 12 3-point attempts in the second half — connecting on a season-high 67 percent overall — and outscored the Wildcats 30-3 from long range. Dekker had five 3-pointers and was named most outstanding player of the West Regional.

"This tournament, he's really shown his full arsenal offensively and defensively," teammate Josh Gasser said. "When he's confident like that making plays, being aggressive, this is the stuff that happens."

Arizona closed within two points early in the second half only to watch Dekker casually fling up a rainbow 3. The Wildcats got within one a minute later and Dekker let loose with another high-arcing 3, sending Badger fans into delirium.

"Eventually when that ball gets out, everybody on the court can shoot it, and they get you with an open 3 that breaks your back," Miller said. "They had two 3s at the half. Think about that."

Arizona pressured full court in the last 4 minutes, making for some perilous possessions by the Badgers as they darted and passed trying to safely get the ball down court. A long inbounds pass by Wisconsin was nearly intercepted before Gasser grabbed it, got fouled and made both free throws to keep the Badgers ahead by 10 points.

"Emptied the bucket, and it was a big one," Miller said of his defensive schemes. "We've tried everything."

Just like a year ago, Kaminsky was a big key. He sidestepped and slithered, pivoted and deked in eluding the Wildcats' lockdown defense. Arizona tossed its biggest bodies on the 7-footer and he still found ways to score inside and out.

Kaminsky led the Badgers' offensive outburst to start the second half. He scored eight of their 14 points, working their inside-outside game to perfection in finding Dekker for a 3-pointer to put Wisconsin ahead 44-36.

Hollis-Jefferson and Tarczewski picked up their third fouls and Stanley Johnson left the game to have his contact lens adjusted, all in quick succession. It didn't faze the Wildcats, who went on a 10-3 run to close to 47-46.

Dekker hit Wisconsin's fifth 3-pointer of the second half, launching a 10-2 spurt that gave the Badgers a 57-48 lead. Nigel Hayes added a 3 and Kaminsky scored on a reverse layup before getting called for his third foul.

Arizona: The Wildcats haven't been to the Final Four since 2001, losing to Duke in the title game. ... Their 14-game winning streak ended. ... They allowed a season high in points. ... Johnson, a projected lottery pick if he leaves early, had six points, five fouls and two turnovers.

Wisconsin: The Badgers have trailed in the second half in five of their seven postseason games. ... They won their 10th straight. ... Rodgers sat with actress-girlfriend Olivia Munn.