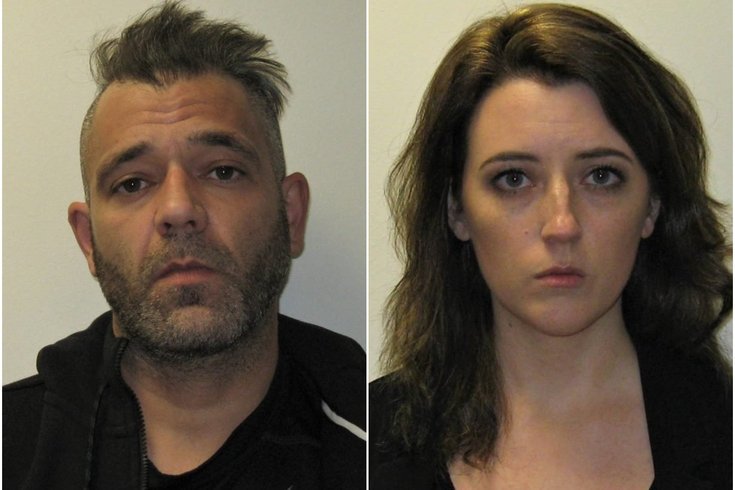 Mark D'Amico (left) pleaded guilty to a federal charge of conspiracy to commit wire fraud in a 2017 GoFundMe scam developed with ex-girlfriend Kate McClure (right), who previously pleaded guilty. The crowdfunding campaign, which relied on a fake story to solicit help for homeless veteran Johnny Bobbitt Jr. raised more than $400,000.

The ringleader of an infamous GoFundMe scam that netted $400,000 based on a made-up, feel-good story of holiday kindness pleaded guilty on Monday to a federal wire fraud charge.

Mark D'Amico, 42, of Burlington County, was the mastermind behind the 2017 scheme devised with co-conspirators Katelyn McClure, his ex-girlfriend, and homeless military veteran Johnny Bobbitt Jr. The others both pleaded guilty in 2019.

In November 2017, the trio created a GoFundMe campaign that shared a sentimental story about how Bobbitt gave McClure his last $20 when she ran out of gas in Philadelphia on the shoulder of I-95 near the Girard Avenue exit. The campaign, titled "Paying It Forward," included a picture of McClure and Bobbitt on the side of the highway and another picture of the three of them together at a gas station. The crowdfunding campaign initially had a goal of raising $10,000 to support Bobbitt.

The fake story tapped into the generosity of the public in a major way, garnering donations from more than 14,000 people who rallied to get Bobbitt off the street. The trio went viral and made appearances on national television, where they shared their gratitude for Bobbitt's act of kindness — which never happened — and for the giving spirit shown by those hoping to lift the veteran up.

The scheme unraveled when Bobbitt accused both D'Amico and McClure of stealing the majority of the money raised on GoFundMe. Investigators later learned that the couple had met Bobbitt outside the former SugarHouse Casino in Philadelphia a month before the bogus highway encounter.

D'Amico and McClure had come up with the highway story to play up their efforts to raise money for Bobbitt, not anticipating that the story would resonate so widely and that they'd be able to massively profit from it themselves.

Authorities determined that D'Amico had helped Bobbitt open up a bank account in December 2017 and deposited $25,000 to help get him on his feet. Bobbit also was given a camper in which he briefly lived on a property owned by McClure's family in Burlington County. Some of the funds Bobbitt received were used to feed his drug addiction, investigators said.

When Bobbitt sued D'Amico and McClure, investigators looked into the trail of money and found that the former couple had spent almost all of the money on gambling, travel, luxury items and expensive cars in a matter of a few months.

GoFundMe responded to the scandal by refunding the donations made to the bogus campaign.

McClure and Bobbitt both pleaded guilty to state and federal charges of theft and conspiracy in 2019. Bobbitt was sentenced to five years in state drug court. Bobbitt and McClure are both awaiting sentencing on federal charges.

The federal charge of wire fraud conspiracy carries a maximum potential penalty of 20 years in prison for D'Amico and a $250,000 fine. His sentencing is scheduled for next March.