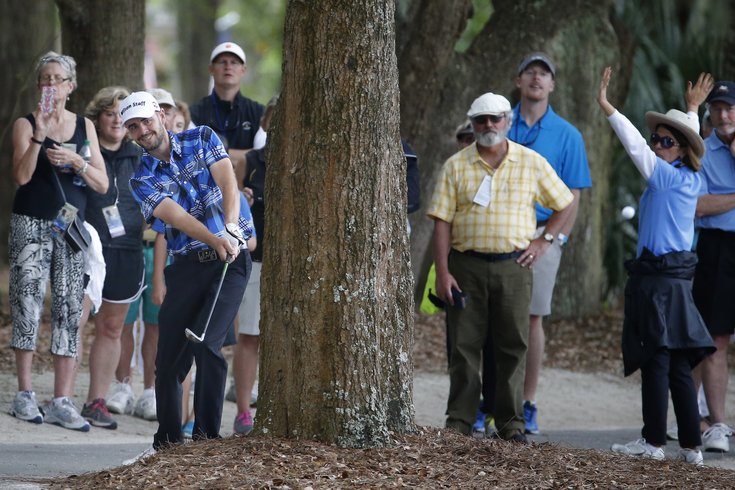 Troy Merritt hits from the cart path off the 15th fairway Friday during the second round of the RBC Heritage tournament in Hilton Head Island, S.C.

Merritt shot a 10-under 61 on Friday to tie the course record at Harbour Town Golf Links only a few hours after Spieth wowed the gallery with a bounce-back 62 to match his lowest PGA Tour round.

Merritt tied David Frost's tournament mark set in 1994 and topped the leaderboard at 12-under 130, a stroke off the 36-hole event record shared by Jack Nicklaus and Phil Mickelson.

Merritt, who opened with a 69 on Thursday, saw Spieth's score in the morning and knew the opportunity was there to go low.

"Anytime that you match shot for shot with the Masters champ, with the way he's playing, it's a pretty good feeling," said Merritt, whose career best in four seasons on the PGA Tour is a tie for second last year at the St. Jude Classic.

Spieth looked like the headliner Friday, following a 74 on Thursday with the 62 — which tied his career low set at the Deutsche Bank Championship in 2013.

The 21-year-old Texan has been on a major role the past month, winning the Valspar Championship and finishing second in San Antonio and Houston before capturing his first major title at Augusta National last week.

Spieth birdied his final two holes at Harbour Town, electrifying the crowds already there to cheer him, to shoot the lowest tournament round in 10 years — until Merritt did him one better.

Merritt had nine birdies over his final 10 holes to surge on top and send Spieth six shots behind on a day of low, low scoring. Merritt ended his round with four straight birdies, including a 5-footer on the signature lighthouse hole, No. 18, to tie the course record.

Merritt was four shots ahead of Matt Kuchar and John Merrick. Kuchar had a 66, and Merrick shot 65.

Past RBC Heritage winners and U.S. Open champions Graeme McDowell and Jim Furyk were 7 under along with Kevin Kisner. Furyk had a 64, Kisner shot 67, and McDowell 69.

Spieth was a stroke back at 6 under, tied for seventh in a pack that included former British Open winner Louis Oosthuizen, who shot a 67.

Spieth had the lowest round since Peter Lonard opened the 2005 event with a 62 on the way to capturing the title. It was a distinction that lasted just a few hours. Still, Spieth showed the energy and skill missing in Thursday's struggles.

Spieth said he corrected his ball position and cured the slice that kept him off target Thursday.

"I went back to posture, ball position, hand position and tempo," he explained. "And I struck that ball quite a bit better."

Most had understandably figured a highly fatigued Spieth wasn't long for the RBC Heritage. Along with a grueling week of grinding for a green jacket, Spieth spent two frenetic days in New York on an interview and appearance tour.

He arrived Tuesday night and took the course yesterday without playing a hole of practice. But Spieth said he was motivated to improve on his poor first-round showing.

He won't have to. But he's still got plenty of skilled players in front to become just the second player ever to follow a Masters victory with one at the RBC Heritage. Bernhard Langer accomplished that double in 1985.