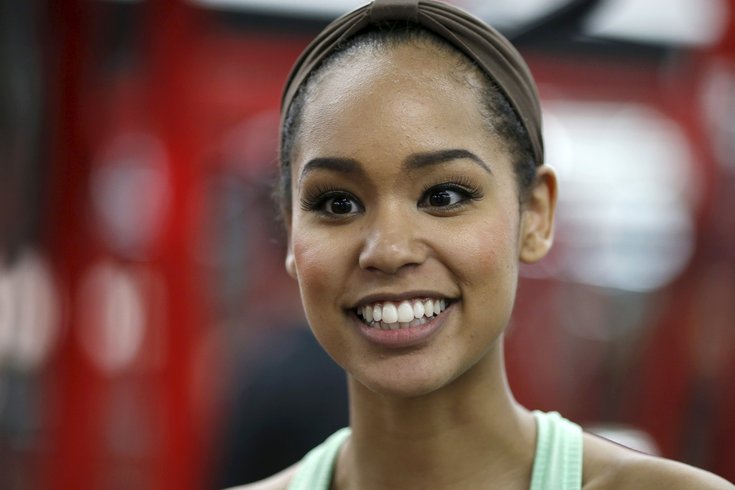 Miss Universe Japan Ariana Miyamoto speaks during an interview with Reuters at a gym in Tokyo April 1, 2015.

So Miyamoto, the daughter of a Japanese woman and an African-American man, whose bronze skin and height of 1.73 m (5.7 ft) are unusual in Japan, where she was born and brought up, took part in the pageant and won, becoming "Miss Japan".

"I thought that, for my friend's sake, if there was something I could do to change Japan, I should," Miyamoto, 20, a dual Japanese and U.S. national, told Reuters.

"He always felt unaccepted by Japanese ... and that made him unable to accept himself," she added, in perfect Japanese.

Miyamoto's selection last month as Japan's representative to the "Miss Universe" contest set off an internet firestorm, despite a push to welcome foreigners ahead of the 2020 Summer Olympics.

"That big mouth, that gaudy face. This is Miss Japan?" one social media commenter wrote. Another said she resembled an ant.

The carping was not new for Miyamoto, who attended a Japanese public school where children would refuse to touch her because "my color might rub off," she said. Fed up, she attended a U.S. high school.

But the pull of her birthplace was too strong and she returned, though she said she is handed English menus and otherwise treated like a foreigner every day.

It's a frustration shared by a growing number of multiracial Japanese, who may look different in an extremely homogeneous nation. Some have won fame in entertainment, but others lack acceptance as the Japanese they feel they are.

In 2013, international marriages made up 3.3 percent of the total, government figures show, or four times the 1980 figure. Mixed race children were 1.9 percent of those born that year.

Miyamoto's victory was "refreshing", said Greg Dvorak, a researcher in Asian and Pacific culture and history at Hitotsubashi University, adding that Japan's reputation as closed to diversity is overblown, despite instances of xenophobia.

"My sense is there is a growing shift among younger generations to accept that people with all faces can speak Japanese and function successfully in Japanese society," he said.

"Whether that will translate into all sorts of appearances being accepted as Japanese remains to be seen."

Miyamoto hopes to do her part, especially if she wins the "Miss Universe" title. Japanese contestants have won twice before.

"Japan is trying to change itself," she said. "I'd like to help it change even more."