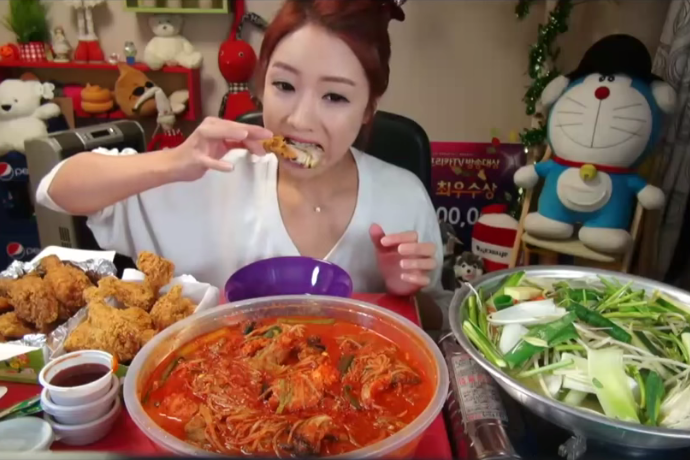 Recent studies suggest introverts make up nearly 50 percent of the population, yet many of us might say doing things alone -- especially pleasurable activities -- is awkward, embarrassing, pathetic and, most importantly, not fun. But this outward response appears to stem from our fear of judgment rather than our own feelings; according to new research, people enjoy pleasurable activities, like eating a nice meal, equally, whether alone or in a group.

Whether others perceive those activities as pleasurable or utilitarian, however, often dictates the stigma we attach to enjoying them solo. This is perhaps especially true of how we think we’re supposed to eat by ourselves. It might be “normal” to consume a utilitarian Lean Cuisine for one at your kitchen table, but to take yourself out for a five-course meal might appear odd.

Fortunately, the stigma attached to spending time by oneself is beginning to fade, thanks to the Internet and alone-time champions like Susan Cain, author of "Quiet: The Power of Introverts in a World That Won't Stop Talking."

In South Korea, where eating alone is especially stigmatized, the mukbang, or “eating broadcast,” is helping to make solo meals seem a little less weird. During a mukbang, Internet broadcast jockeys (or “BJs,” as they’re affectionately known) live stream themselves gorging on magnificent, calorific meals for the viewing pleasure of their hundreds of thousands of food-obsessed fans.

Like competitive eaters, big-time mukbangers put their bodies through enormous stress to reap fame and financial gain. Yet, while traditional mukbangs are decidedly unhealthy and even dangerous to the eater, eating shows may actually impart benefits to viewers.

As food vlogger Gabie Kook told CNBC earlier this year, mukbangs can help people who want to eat less stick to smaller portions because they are so visually satiating. While mukbangs are sloppy and, well, hedonic, they make solo indulgences less taboo for viewers who want to eat more. For people who seek a happy medium between eating alone and with others, mukbangs strike a middle ground. This kind of cyber dining makes it socially permissible for each person to eat and interact at his or her own pace.

Now mukbangs are catching on all over the world. People from diverse backgrounds with equally unique taste preferences are putting their own spins on the traditional eating broadcast. However you like to chow down on your own time, now there’s a YouTuber who’s into the same thing.

Swedish YouTuber Therese Lindgren uploads somewhat aspirational mukbangs during which she feasts on a much more nutritious fare, like rice and cashew stir-fry, washed down with a posh bottle of aloe vera juice. Her mealtime stories are impassioned and wildly entertaining, even if you don’t speak her language. 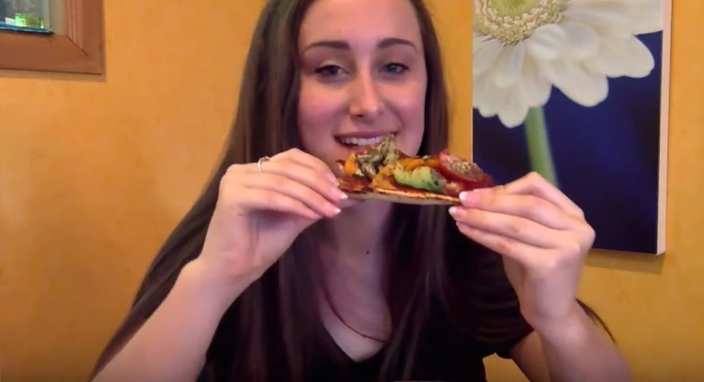 Vegan YouTuber Hannah Chloe was inspired to film her own mukbangs after researching South Korean culture while considering a job teaching English abroad. The 23-year-old’s channel is devoted to educating viewers about veganism and transitioning to a vegan lifestyle. Like most mukbangs, her eating shows provide a glimpse into the particular eating habits of people with unconventional eating styles: she can eat 10 bananas in one sitting.

Seattle YouTuber Positive Smash has been uploading a steady stream of what you might call “pizza and garden salad variety” mukbangs every day for the past two months. Her channel is devoted to bonding over a love of novelty foods and old favorites with her viewers, whose feedback, she says, has been mostly “very friendly and kind.”

As her following grows, she’s begun taking requests and suggestions from her audience.

“They really like that I try different foods all the time,” she said. “I will ask if there is a dish they want me to eat and I will try to make it or order it. They appreciate that I take their comments into consideration.”

Positive Smash began creating mukbangs because she simply loves food. The 28-year-old former restaurant worker with a self-professed passion for trying new tastes and textures says mukbangs filmed for love of food are much different than those filmed for profit.

“Traditional mukbangs are filmed at an angle that makes it look as if you are looking down on the person eating a large quantity of food,” she explains.

“I prefer to film myself eating a more 'healthy' amount of food, the same amount I would be eating on a normal night. I also like to film from an angle that makes it feel like I’m sitting across the table from my audience, as though eating dinner and having a fun conversation.”

As much as she enjoys sharing meals with her subscribers online and her husband (in real life), she says eating alone or while viewing other mukbang broadcasts can be extremely enriching.

“When I eat alone, I focus more on the food, the flavor, the textures.” 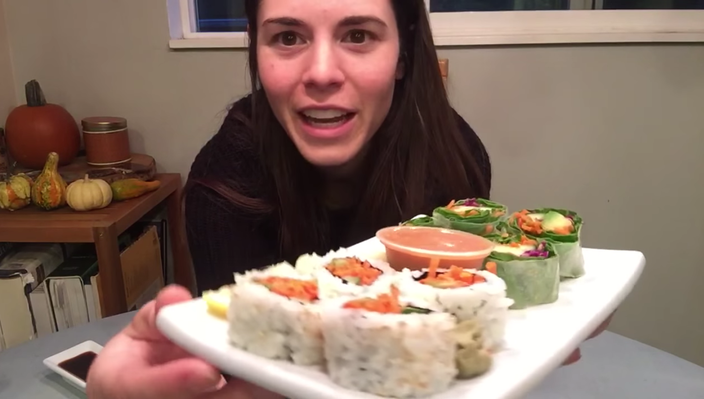 According to tradition, a good mukbang lays everything out on the table with no pretense or artificiality. It’s all there: the sounds of chewing and slurping, talking with your mouth full and choosing whichever utensil speaks to you, whether that’s a fork, a pair of chopsticks, or simply your own fingers. There is no obligation to appear dainty or temperate.

It’s this real-world relatability that makes them so compulsively watchable.

“I’ve gotten overwhelmingly positive responses from my YouTube mukbangs,” says Hannah Chloe. “I’ve been surprised at how many people have watched a whole video because long videos are not usually popular on YouTube.”

She echoes the sentiment that eating alone can be good for you.

“I would say if you want to have some time alone to reflect and relax, eating dinner alone can be quite therapeutic. When I eat alone I enjoy the ritual of making the food just the way I like it and eating whilst watching something I enjoy.”

But the drawback to eating alone, she adds, is “compounding a feeling of loneliness.”

“If you’re already feeling alone and sad, eating alone can make that worse, because sharing food is one of the most fundamental ways to enjoy community,” she notes. “I think many people watch mukbang because they enjoy the insight it gives into someone else’s life.”

It takes a certain kind of emotional vulnerability, a willingness to share the true essence of you, to sit down with a plate of your favorite food and film yourself for the entire world to see. Mukbangs are a way to eat dinner with hundreds, if not thousands, of people, if you’re the one broadcasting. If you’re the one tuning in, it’s a way to eat dinner with someone new every night.