Could a national gun buyback program reduce the 393 million guns on America's streets? 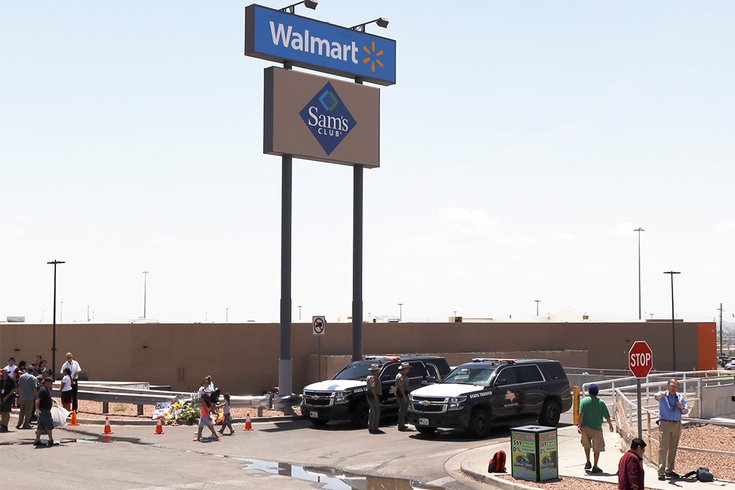 The Walmart shopping mall area is cordoned off after a mass shooting in El Paso, Texas, on Sunday, August 4, 2019. The U.S. federal government is treating the shooting as a domestic terrorism case, the U.S. attorney for the Western District of Texas said Sunday. The attack in the border city of El Paso in Texas left 20 people dead and 26 wounded. A 21-year-old white male was arrested.

Americans own nearly half of the world’s guns, with approximately 120 firearms for every 100 U.S. residents.

Gun control policies may someday restrict new gun sales. But what impact can they have when Americans already own millions of guns?

Some have pointed to gun buybacks as a potential solution to this problem.

I have spent years studying American attitudes toward guns and gun policies, including smart guns and open carry. I know that gun owners feel strongly about their identities as gun owners, making it difficult to create a strategy for taking guns off the streets.

The sheer number of guns is part of the challenge. The United States has the largest civilian-owned stock of guns in the world. At the end of 2017, the Small Arms Survey reported that there were an estimated 393 million firearms in the United States – and that’s not even counting guns owned by the police and military. That represents 45.8% of the world’s civilian-owned guns.

Yemen has the second-highest rate of gun ownership per person in the world, with just 52.8 firearms per 100 residents.

More than 40% of U.S. adults live in a household with at least one gun. About half of all civilian-owned guns in the U.S. are owned by just 3% of U.S. adults. These gun owners have an average of 17 guns each. Most other gun owners average about three guns at home.

Gun buyback programs are designed to reduce the number of firearms by purchasing guns from private owners, and typically destroying them.

Gun buyback programs are not new.

Following a mass shooting in 1996, Australia banned automatic and semi-automatic rifles and shotguns and instituted a national gun buyback program.

In a year, Australia purchased about 650,000 firearms from private residents, estimated to represent about 20% of the country’s privately owned guns. Research evaluating the effects of the buyback found a 42% decrease in homicide rates and a 57% decrease in suicide rates in the seven years after the legislation passed. But some researchers are still uncertain whether this decrease was due to the buyback, or whether it was simply part of an existing downward trend.

U.S. cities have experimented with buybacks on a much smaller scale, even though the Pew Research Center reports that more than 70% of gun owners say they could never imagine themselves not owning some sort of firearm.

One of the earliest examples occurred in Baltimore, Maryland. In 1974, Baltimore police paid residents $50 per firearm, collecting roughly 13,500 over a two-month period. Rather than reduce crime, homicides and assaults spiked during the buyback. It is unclear why, but two months is a short time period for a clear pattern to emerge and crime rates in cities across the country were increasing through much of the 1970s.

Baltimore is not unique. A 2008 review of the existing research by Matthew Makarios and Travis Pratt in the journal Crime & Delinquency found that gun buyback programs have generally been ineffective in reducing crime in the U.S. Challenges include the types of guns purchased, the involvement of law enforcement, and the costs involved.

Gun buyback programs often place no restrictions on the types of guns that can be purchased. Civilians frequently bring in old firearms, guns in disrepair, rifles, or shotguns. Sacramento, California, implemented a gun buyback program in 1993. Nearly a quarter of all guns submitted were not in working order.

The Boston Police Department also attempted a gun buyback program in 1993 without a restriction for weapon type. Only about half of submitted firearms were handguns. That’s significant because we know from existing crime data that although some mass shooters use more powerful weapons, handguns are the type of firearm most often used in violent crime and in youth violence. If the goal is to reduce crime, getting shotguns or broken firearms off the street will likely have little effect.

Guns obtained through a 1994 to 1996 buyback in Milwaukee also differed from those typically used in suicide and homicide.

The number of shootings decreased by 14% in Boston in the year after the buyback and continued to decrease through 2010.

Other jurisdictions followed Boston’s example. In 2015, 13 police departments in Massachusetts instituted a buyback program with higher amounts paid for types of firearms more frequently used in crime. As a result, they were able to collect more handguns. But three out of five people who sold their guns said they still had one or more guns at home.

Experience shows that some people will attempt to profit from gun buybacks by submitting inexpensive or broken firearms worth less than the cash incentive offered through the buyback.

In Baltimore, one buyback participant claimed she was going to use the buyback money to purchase a larger weapon.

In Oregon, private citizens waited outside the gun buyback locations to purchase firearms and ammunition from owners before they could go inside to submit them to law enforcement.

Gun buybacks are financed by taxpayer dollars and are generally paid for by local agencies rather than through state or federal funding. A local jurisdiction’s budget will limit the amount of firearms it can purchase and destroy, reducing the likelihood that a gun buyback will have an observable impact on local crime rates.

Typically, gun buyback programs are run by law enforcement. Understandably, criminal offenders may be hesitant to come to the local police station or interact with law enforcement – even if they are promised exemption from prosecution for weapon possession.

Boston attempted to address this concern in 2006 by designating sites like churches as drop-off locations. Other jurisdictions have held gun buybacks run by nonprofit groups, but law enforcement officials are frequently on-hand as security, or to help take the guns to be destroyed after the buyback.

So far, gun buybacks in the United States have been a community-based, grassroots endeavor with limited impact. Their feasibility on a state or nationwide scale is unclear.

Cost alone may be a prohibiting factor. Assuming a $50 per firearm incentive, reducing the U.S. gun stock by 1% would cost $196.5 million. Inevitably, only some of the guns purchased would have been used in future crimes.

[ Expertise in your inbox. Sign up for The Conversation’s newsletter and get a digest of academic takes on today’s news, every day. ]