Bradley Beal is tweeting cryptic messages and Philly just hired Damian Lillard's longtime trainer. But what does it all mean? 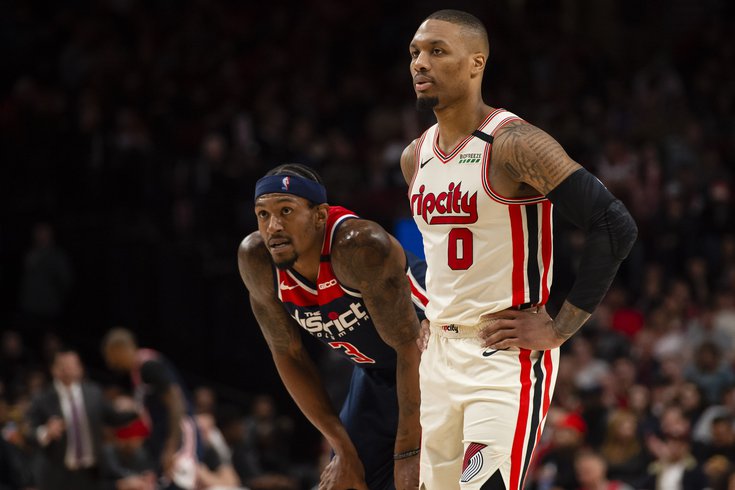 You can read more on the deal, what it means and why it was the right move, here.

UPDATE [2:34 p.m.] — This is neither a free agency nor trade rumor update, but it's everywhere on Twitter right now so we figured we'd pin it here for posterity. It appears Sixers center Joel Embiid and president of basketball operations Daryl Morey are playing some tennis on Drexel's campus.

Joel and Morey doubling it up at Drexel campus. Def a sign that something big is in the works!!!! pic.twitter.com/12LDezZVZB

It's a nice day to be out on the court, but doesn't Morey have more important things to be focusing on? Or maybe that's what he and Embiid are discussing? Or, more likely, he just needed to get out of the office for a little?

It doesn't really matter. The biggest takeaway from this is the fact that Embiid, who suffered a torn meniscus in the playoffs, is out playing tennis, presumably with the team's blessing since, you know, his boss is standing right next to him.

UPDATE [1:46 p.m.] — Keeping with our theme of upgrading via trade vs. upgrading through free agency, how about this juicy nugget from Yaron Weitzman of FOX Sports, who reports that the team has hired a new consultant. And not just any consultant — it's Damian Lillard's longtime trainer. Here's more from Weitzman:

Beckner's official title with the Sixers is "Consultant to the Coaching Staff." He's already started working with some Sixers players in the team's training facility and will likely spend some time with the team in Las Vegas during Summer League. https://t.co/fgsRKmHPUm

That's certainly interesting, especially with the Sixers being linked to Lillard in Ben Simmons trade discussion, but like the Bradley Beal stuff in the update below, it might not mean a ton. As Kyle Neubeck quickly pointed out, the Sixers had previously hired a strength and conditioning coach with ties to Kevin Durant, but that didn't bring the All-NBA forward to Philly — unless of course you count his stake in the Union.

UPDATE [12:52 p.m.] — This isn't necessarily an update involving any reporting, but it's worth monitoring nonetheless, especially given the Sixers' situation and the possibility of Wizards star Bradley Beal being a trade target in a Ben Simmons deal.

Almost an hour later, Beal's wife followed it up with a similarly vague message.

What does it all mean? Everything? Something? Nothing? We'll see...

Daryl Morey and the Sixers were slightly more active on Day 2 of NBA free agency, bringing in some depth in backup center Andre Drummond and sharpshooting power forward Georges Niang. The former joined the team on a one-year deal for the veteran minimum while the latter signed a two-year deal for which the Sixers used part of their midlevel exception.

Are either of those moves — or the signing of Furkan Korkmaz to a three-year deal — enough to get Sixers fans excited? Not really, but then again there wasn't much the Sixers were going to do in free agency that was going to inspire the fanbase, largely because of their cap situation. To aid that, Morey waived deadline acquisition George Hill on Tuesday, a surprise move that could be telling of the team's overall approach to this year's free agency.

While big fish like Kawhi Leonard remain unsigned — as does one of the Sixers own free agents, starting forward Danny Green — the team could be looking to make its biggest upgrade via trade. As in, a trade sending Ben Simmons out in exchange for another star.

It's true that many of the rumored offers the Sixers have made involving Ben Simmons have been centered around draft picks, but that doesn't mean that's the haul Morey is actually looking for. He knows the team's window is now — the Sixers currently have the seventh best odds to win the title, according to Pickswise — and a slew of draft picks, no matter how high, is not going to give the kind of immediate impact the team is looking for. So why is he reportedly asking for multiple first-round picks? Because that's the kind of package he could turn and flip for someone like Damian Lillard or Bradley Beal, who should be the only two realistic end goals for this Simmons drama.

It always seemed to make the most sense that Simmons would be dealt as part of a three-team deal, but once the NBA Draft came and went and he was still here, it stood to reason that the bulk of free agency would play out before attention turned back to Simmons, and that's exactly what's going to happen in the coming days. The problem for the Sixers is that the majority of their roster will already be constructed around the current core, not know what exactly they'd be getting back at this point, if anything. That could lead to some awkward fits this season, but ones that can surely be worked out over time, if not through a move at the trade deadline.

There's also rumors that the Sixers are shopping forward Tobias Harris, so really with the exception of Embiid getting moved, pretty much anything seems to be on the table for the Sixers when it comes to trades.

Of course, there's still free agency. We're only on Day 3 — and players can't even officially sign until noon on Friday — but there's already been a ton of movement, even if it hasn't really involved the Sixers. The free agent frenzy will continue on Wednesday, and we'll have you covered with all the latest news, rumors and analysis right here (and as always, we'll top this post off with any updates that directly involve the Sixers).